"Like, c'mon, they're good, everyone likes Stories, everyone on Instagram's using them. You'll like them, trust us, check them out".

Facebook's latest effort to 'make Stories happen' on its main platform involves another new layout test, this time with Stories taking up pretty much all the top of screen real estate - front and center when you open the app. 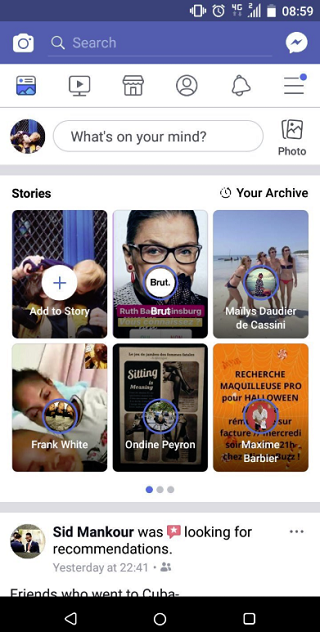 They just might not be the best option for Facebook's main platform, at least based on usage stats.

So what are those usage stats?

The problem is that Facebook has a) much broader scale, and b) is seeing much slower Stories take up.

On the first point, Facebook and Messenger combined have more than 3.5 billion users, yet only 300 million of them are bothering to check their Stories each day, despite that prominent, top of screen placement (even more prominent in this test). There's not much more Facebook can do to make Stories more present in the app - and yet, still, fewer than 10% of overall users checking on them at all.

For comparison, Snapchat has previously reported that 25% of its daily active users post to their Story every day, while on Instagram, 40% of its users engage with Stories daily. Facebook Stories basically sees a lot less attention, despite being in a much bigger app.

Facebook's size and exposure potential also means the adoption of Stories on the platform is a concern - back in May, Facebook reported that Facebook and Messenger Stories combined were seeing 220 million DAU, which means that Facebook Stories has added 80 million users in five months. For comparison, Instagram, with a smaller audience and wider previous Stories adoption (meaning they're closer to saturation point) added 100 million more DAU between December 2017 and June 2018.

Of course, the now older audience skew of Facebook means it could take longer for those users to shift across to Stories, to buy into the Stories trend. But still, Facebook keeps shoving Stories in users' faces, and adoption rates aren't rising at a comparatively encouraging rate. Is Facebook Stories really the future of Facebook?

Facebook itself has the data here, they're the ones who can see where user interest is headed. But it still feels - with the addition of this new test - that Facebook is trying to manufacture a trend, rather than work with one.

Maybe Facebook Stories will soon come into its own and take over, maybe Facebook simply knows that sharing on its main platform is down and Stories are its only hope. Either way, this tests seems a little too upfront. Annoying even.

But, if it gets more people using Facebook Stories, maybe The Social Network still wins out. Time will tell on this front.