Earlier this year, we were given a failing campaign and tasked with the ultimate marketing challenge of turning it around. Not only did we succeed, but we transformed the campaign into a highly profitable one for a very happy e-commerce client.

We were able to achieve this through some simple tactics that many top Facebook ad experts use to optimize their Facebook ad campaigns - in this post, we'll go through how we increased the return on ad spend (ROAS) an improved this campaign, with notes that may help you improve your own Facebook marketing approach.

Our first step was to pinpoint exactly what was working, and what wasn’t.

1. The Audience (and attributes) - This can be broken down into a few great sub-leverage point areas:

2. The Offer - Facebook offers get stale, especially if you’re marketing to the same audience.

3. The Ad Type – Vital - Collection ads had just been recently released, and we were using them with a lot of success for our e-commerce clients.

Here’s everything we discovered that was being done wrong in the failing campaign:

From the above, it was clear that 18-45 year olds were the ages to focus on.

We grouped major ages that performed together, in order to analyze their total ad spend, sales and return on ad spend (ROAS):

When analyzing their placement, we discovered that

It clearly had the highest ROAS at 3.59 for any meaningful spend.

The current campaigns were using a single video with the featured product - randomly testing multiple videos and rotating them.

As noted, Collection ads (mobile only ads) had just been released, and were currently not being utilized by the client.

With knowledge of collection ads performing well for some of my other clients, I was really keen to incorporate collections ads in our test.

How We Grew ROAS By 84.65% and Turned this into a Wildly Profitable Campaign

Given that mobile contributed to over 90% of their sales, we decided to only focus on mobile placements.

We created the following audiences:

For most audiences we had the following attributes:

As noted, we limited our targeting to mobile only.

We used the most successful video that was working and decided to split test the single video ad against the new Facebook Collection ad, to see what the impact would be (for this, we had a to do a bit of work setting up their feed).

We agreed on the testing of two new offers:

A +6.33 ROAS meant every dollar spent was now returning 6.33x in sales. This meant an increase in profits from a barely breakeven position, to generating a 105% ROI on his spend (according to feedback from the client).

He told me that they went from netting almost nothing on a 15k per month spend - to netting over 16k per month in profits.

Sales for the same spend from their previous campaign would have been in the 120k range.

We increased ROAS% close to 85%, and achieved this through a:

Here are the results by offer: 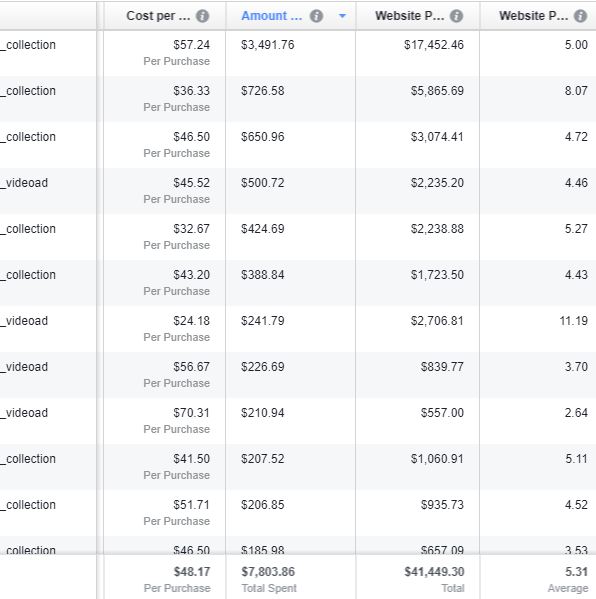 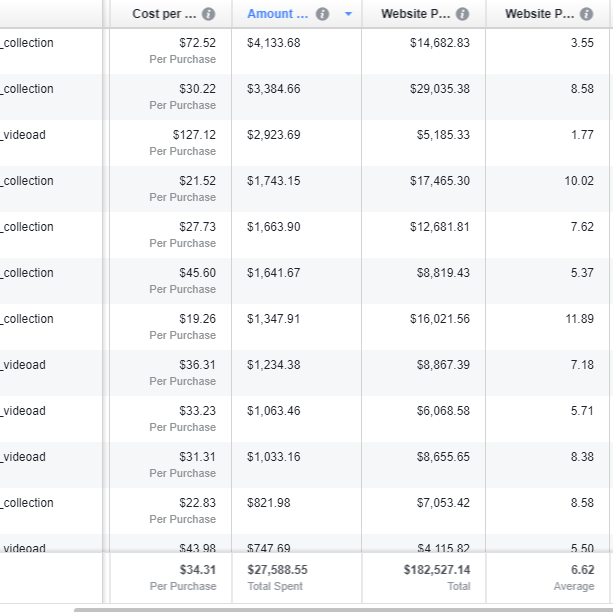 Both offers thoroughly outperformed the original offer, with new offer two nearly coming in at double the rate of new offer one.

Females and Males returned an ROAS of 7.1 and 6.14 respectively. These returns were unprecedented.

Here’s how the new campaign fared against the old campaign:

As mentioned above we limited our targeting to between 18s-40s for any audience that was not a website retargeting audience. 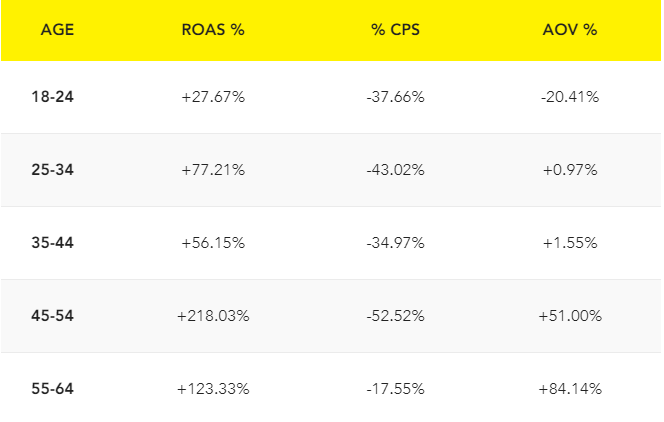 All age groups, except the 18-24s, had both a decrease in CPS% change and an increase in dollar/sales.

Compared to the original ads they were running; Collection ads nearly doubled the return they were getting:

The additional work of getting their feeds set up was more than worth it, and paid off handsomely.

Outcome After Two Months of Optimization

So, our two months were up, and our results were in.

Our client’s turnaround had gone from barely breaking even (as low as 2.8x from FB sales at one low point) to an overwhelming campaign success of:

These tips obviously won't apply to all campaigns, but hopefully there are some notes in there that you can use to help optimize your Facebook marketing approach.