Facebook has unveiled a new type of ad unit called 'Collections', which incorporate video, product images, and even Canvas-style elements, within a single post. 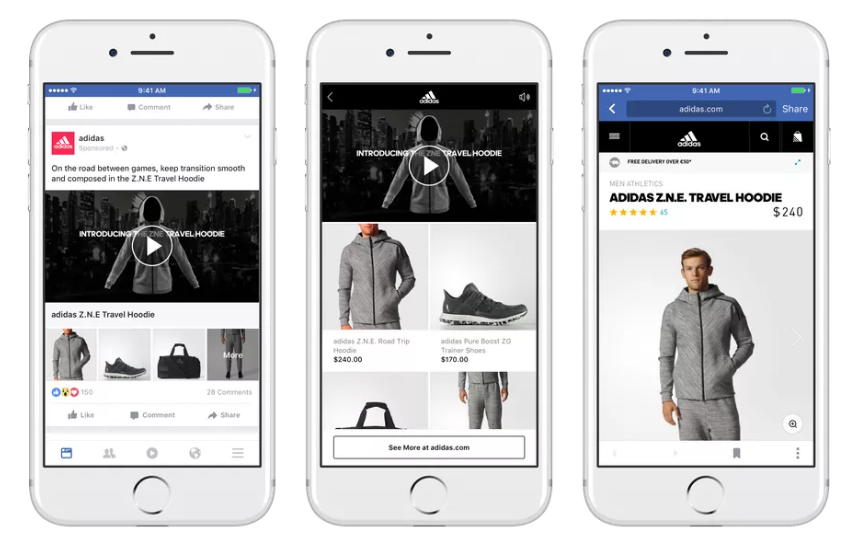 As you can see, the main element of the new format will be a video (though it can also be an image if you choose), with related products listed beneath. Advertisers will have the option of either selecting the products to be featured, or letting Facebook decide which products to showcase, based on the brand's existing product catalog - Facebook will optimize the display based on what it thinks will best appeal to the each individual viewer.

When a user clicks on any of the images, they'll be taken to a product catalog of up to 50 items which Facebook will again pull from the advertisers' product listing (there's a breakdown of how to upload a product catalog here). The display is hosted on Facebook and functions like a mini-website, the same way their Canvas ads do. Click on any specific item and you'll get a full-screen profile - you won't be able to purchase products through Facebook at this stage, though that does seem like a logical future development.

The new ads look to tap into the popularity of video content for driving response - according to Facebook, 75% of consumers say that watching video on social media influences their purchase decisions.

The ads are also very similar to Pinterest's recently introduced Promoted Video ads, which - in the same way - feature product listings along with a showcase video.

But however they came about, the new ad format will provide an additional consideration for Facebook marketers, with an immersive, engaging format that can provide more context and help drive direct response.

And on that, Facebook's also looking to improve their reporting - coinciding with the release of Collections, Facebook's also announced that they'll start providing more data on the types of clicks that ad formats, like Collection and Canvas, receive.

As noted, users aren't able to make purchases direct, but they will be able to link through to the relevant landing page for each product - Facebook will now provide data on this, giving advertisers more transparency on ad performance.

And as reported by Marketing Land:

"Facebook will also report outbound clicks for ads running on Instagram that carry links to off-Instagram domains, like a brand's Facebook Page or the brand's own site. Eventually, these Instagram-specific outbound click stats will be pruned to only count clicks to a non-Facebook property."

The measures will increase advertisers' capacity to track their Facebook ad efforts - though no doubt some will remain skeptical of the data, given Facebook's recent mishaps with their ad metrics.

Collections ads will start rolling out from Thursday and be made available to all Facebook advertisers in the coming weeks.