As you may recall, last year, LinkedIn launched a re-vamp of LinkedIn Groups which aimed to restore the platform's groups functionality back to its former glory.

Once a key part of the broader social marketing landscape, LinkedIn groups eventually became so clogged with spam and junk that many turned into impenetrable swamps of self-promotion. But LinkedIn saw opportunity to fix this, and has since been working on its do-over of groups which, ideally, will eventually bring users back.

But the platform's initial updates on this front were fairly minor. The main focus was, rightly, on the way in which LinkedIn sent group members notifications, but functionally, there wasn't any major changes, other than improving the integration with the main mobile app.

But even those minor changes have had an impact - this week, LinkedIn has reported that member engagement within groups has more than doubled since the re-launch, part of the broader trend of increased on-platform engagement.  And with that, LinkedIn has also announced a new set of updates for groups, aimed at keeping that momentum going, and encouraging more groups use.

First off, LinkedIn's rolling out notifications for new groups posts, in order to keep members up to date with what's happening.

As you can see here, the updates cut down on repeated notifications by compiling the listings into a single update, while still keeping members informed about new group conversations. Which is good, but the lack of context as to what those new conversations are exactly could be problematic - if you click/tap on that link and find a new collection of spam, you'll be less likely to click again (no doubt LinkedIn is working on this).

The new updates will be rolled out to group admins first, with a view to launching for all members in future.

LinkedIn's also looking to generate more interest in group conversations by alerting users to group discussions started by their connections.

"See new posts initiated by your connections right from the main feed an in notifications. Stay tuned for improved discoverability of group posts by your extended network in the near future."

As noted, the notification element is risky for LinkedIn, as the over-use of group notifications (especially via email) is what eventually caused many users to turn them off, and stop using groups entirely. But alerting people to group conversations started by their connections does make sense, and if LinkedIn can use its improving topic recognition and association tools to help alert users to group conversations not only by connections, but also of relevance to them, based on their interests, that could definitely help improve groups engagement.

LinkedIn's also working on a new addition which would enable group admins to notify group members of important conversations within their groups. 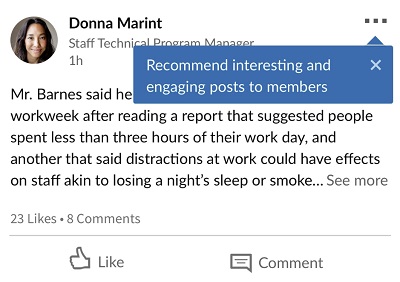 This is still in development, so there's not a lot of technical detail available as yet, but this could be particularly helpful if group admins were able to notify specific group members (or subsets of group members) of specific conversations, as opposed to simply highlighting key discussions to all.

For example, maybe LinkedIn could provide a subset of 'engaged group members' who regularly participate in group conversations, or members who regularly interact with posts around certain topics. This is obviously an advanced capability, and as such, more difficult to implement, but this capacity could provide a significant boost in maximizing group engagement.

LinkedIn's also developing a new group post review and approval process, which will give group admins a proactive way to ensure that the content which gets shared in their groups is relevant and valuable.

This is a key element - it's obviously going to be reliant on the activity of admins to ensure that their groups remain focused, and you'd expect it will also be an opt-in process (not all groups will want to do this). But for those who are considering building a LinkedIn group to tap into on-platform engagement, this could be critical, ensuring their groups remain free of spam, and improving return engagement rates as a result.

And the last addition is a new option to upload a group cover image to better personalize your LinkedIn group.

This has been an option on Facebook for some time, while Facebook also, more recently, added the capacity for group admins to change the color tones of their groups, further adding to that more personal touch.

All of these are good additions for LinkedIn groups - though as noted, much of the functionality that's returning is similar to the LinkedIn group notifications of the past. There's more control here, LinkedIn's being more careful with how it utilizes its updates, and they will need to tread lightly to ensure that marketers don't see this as a free ticket to intrude member inboxes (which is what lead to groups becoming a spam free-for-all last time).

Done right, LinkedIn groups could well be on the comeback trail. Not all of these new tools are available yet, but LinkedIn says they will be coming soon.

(Thanks to Matt Navarra for sharing the latest LinkedIn groups update)