Meta Launches New Interactive Options for VR Worlds, the Next Steps in the Metaverse Shift

Meta’s taking early steps towards making its VR environments more interactive, with an initial rollout of the ability to invite friends into your Meta Horizon Home environment.

As you can see in this overview, soon, VR users will have a new way to invite their friends to connect in the VR environment, in order to play games, watch video, or simply explore new virtual worlds together.

“For years, Home has existed as a transitory space. Home is the first thing you see when you put on your Meta Quest headset, and a familiar place to return to when you’re done exploring […] With v41, we’re taking a step towards our long-term vision. As part of this update, we’ll begin gradually rolling out the ability to invite friends to your Meta Horizon Home environment and hang out, coordinate your next gaming session, and even launch your group straight into supported multiplayer experiences.”

There’s limited support for multiplayer interaction in VR apps right now, and as you can see, VR avatars still don’t have legs as yet. But this is another step towards Meta’s ultimate metaverse vision, where VR headsets will become a portal to entirely new, entirely immersive social experiences.

It may not seem like it now, as it’s still early days for VR adoption, but eventually, Meta’s hoping that this will become as common a practice as checking your phone, till you don’t even need your phone any more to interact, and you spend all your mobile screen time in VR environments instead.

That still seems far-fetched. Wearing a VR headset for any length of time can get annoying, while there are also issues with motion sickness and other factors that likely limit the amount of time you want to be engaging in virtual spaces. But again, Meta’s making big bets on VR, and the metaverse, becoming the future of interaction, with Zuck and Co. investing billions into the technology that will power the next phase of digital connectivity.

Experiences like this give us a glimpse of what we can expect, and while it is still early, you can start to see the framework of Meta’s metaverse taking shape, with more interactive tools being built in, more collaboration and creation platforms being released, and more avatar customization options being developed to facilitate personalization and identity within the space.

On that front, Meta’s also working on its new photo-realistic avatars, and developing new ways to create more true to life avatar characters for the VR space.

Late last year, Meta showed off its evolving Codec avatars, which are effectively photo-realistic depictions of your physical self, in digital form.

Those are impressive, but the problem lies in creating these depictions, as users need to be filmed within a 360 degree camera rig to facilitate creation.

Or at least, they did.

According to a new report from Upload VR, Meta has now developed a new process which will enable users to create similar photo-realistic avatars via their current mobile device. 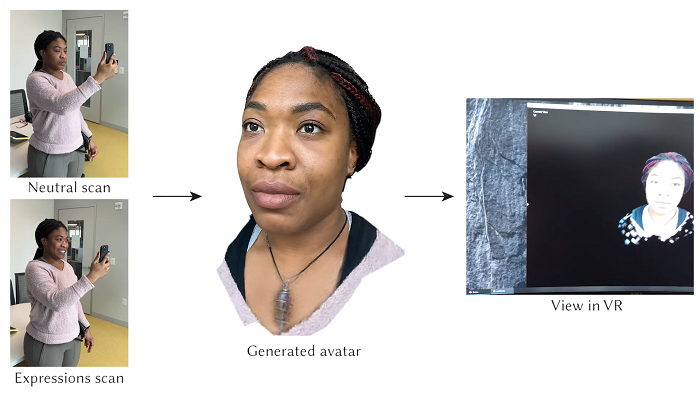 “Previously, generating an individual Codec Avatar required a specialized capture rig called MUGSY with 171 high resolution cameras. But Meta’s latest research gets rid of this requirement, generating an avatar with a scan from a smartphone with a front facing depth sensor, such as any iPhone with FaceID. This scanning process takes 3 and a half minutes on average, the researchers claim – though actually generating the avatar (in full detail) then takes six hours on a machine with four high end GPUs. If deployed in a product, this step would likely happen on cloud GPUs, not the user’s device.”

So, there is still a heavy processing load required - but again, we’re seeing the next steps of VR interaction, which will eventually form another layer of the metaverse shift.

It’ll take time, of course, for all of these elements to coalesce, and for VR take-up to reach the point of critical mass. But Meta’s bet is that younger audiences, who are more accustomed to engaging in virtual spaces like Roblox, Fortnite and Minecraft, will eventually welcome these new interactive environments, where they can interact via digital avatars within shared worlds.

Ideally, this would all happen at once, and we’d have a fully-formed VR space right now. But each step will take time, with a key shift being the rapid acceleration of VR take-up as VR devices become the central point of engagement for younger users.

One great game or app could be the catalyst on this front, and when that happens, the metaverse shift could happen faster than you’d think.

It’s not there yet, but the building blocks are being shifted into place.