Underlining the rising influence of online content in broader media consumption, a new study conducted by the Consumer Technology Association, to be released in conjunction with the annual CES industry event, has found that US consumers now spend almost as much time streaming videos on social platforms as they do watching traditional TV.

As reported by Variety, the study, which incorporates responses from over 2,000 respondents, shows that, overall, user-created content on social platforms now accounts for 39% of weekly media hours consumed by Americans, versus 61% for traditional media. 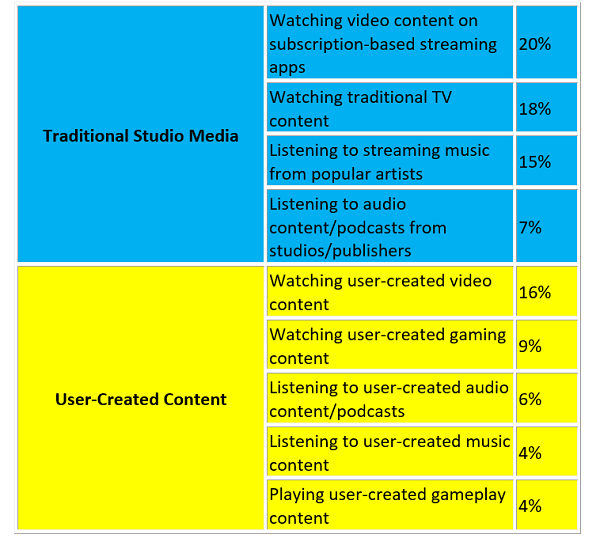 You can see the breakdown in this listing, with traditional TV consumption taking up 18% of overall media consumer time, against 16% for user-generated content online.

And as you would expect, that trend is even more pronounced among younger consumers.

“Teens 13-17 spend 56% of their media time with user-created content compared with just 22% among consumers 55 and older.”

The data underlines the evolving shift away from traditional media, and towards more democratized social media platforms as the key form of content consumption. Which is important to note for brands – though it is also relevant to note that traditional TV and subscription-based video, right now, still takes up the lion’s share of media consumption time.

While there’s clearly significant value in UGC, and big benefits for exposure and audience building in social apps, there’s also still something to be said for editorially-defined content. And while VOD services look set to be the death knell for traditional TV, despite younger consumers aligning with individual creators more than channels and shows, moderation and publishing control do still play a key part in sorting the cream from the crop, and amplifying that material to bigger audiences.

That has changed, of course, over the past decade, but it is interesting to note the significant role that editorially-curated content still plays in the broader media landscape. Younger consumers are far more aligned with individual creators that they find and subscribe to, and that is a key daily consumption trend to note. But in terms of spending your media dollars right now, there remains significant value in these legacy (for lack of a better term) formats, that could drive strong results.

In other words, don’t put all your eggs in one content basket, but do ensure that you’re aware of the latest consumption trends, which are set to be shaken up again over the next decade as we see a new wave of metaverse-native creators taking up this new stage.

The CTA study also found that around 20 million creators in the US are monetizing their content in some way online, with the average income for online creators sitting at $768 per month.

“Of revenue earned by creators, 28% is from merchandise or fan experiences; 27% is from content subscriptions; 27% is from a la carte payment for content; 16% is from tips; and 2% is from other sources.”

While platforms are working to add more monetization options for creators, in order to retain top stars, and keep their audiences coming back for more, merch and subscriptions remain the top earners, with tips still a way behind.

Which makes sense. While people may well like, and even love certain creators, they’re still not overly likely to pay for something that they can get for free. For creators, that means that you need to work on your added value proposition to maximize your revenue streams, and developing products and/or services that you can provide in addition to your regular content to boost your opportunities.

It’s an interesting report on the current state of the media landscape, and the changes that have transformed the way that media distribution works to a large degree. Given this, if you want to maximize your brand messaging in 2022, you should be looking to diversify, with popular UGC in your niche now a key pipeline for many brands to reach the right audience.

That could be even more effective than TV ads, which have long been viewed as the premium ad placement option. TV ads will still secure greater brand awareness in many respects, but depending on your audience, there could also be better, more valuable ways to connect.