We all know that you need a mobile-friendly website, that mobile is where attention is increasingly focused, and that you need to be factoring mobile presentation into all aspects of your digital marketing efforts.

But this new report from Pew Research highlights some additional considerations of note. Based on feedback from over 1,500 US adults, Pew looked at the latest internet access and mobile usage habits, and found that the mobile shift is indeed in full force, but is specifically so in two key brackets: younger users, which you would expect, and lower income households.

On the first point, Pew found that 37% of U.S. adults now mostly use their smartphone when accessing the internet, which is double the rate it was in 2013, 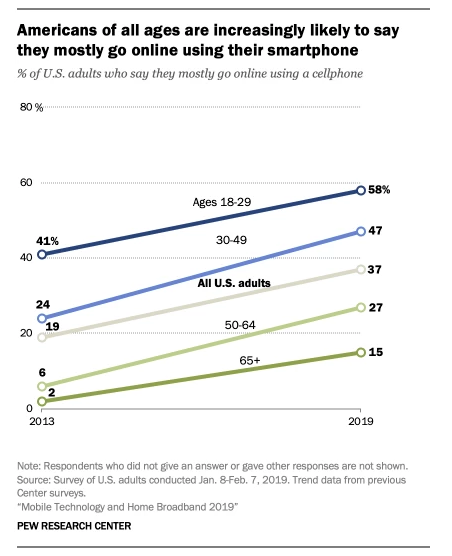 The biggest increase over that period is in younger age groups. As explained by Pew:

"Younger adults are especially likely to reach for their phones when going online. Fully 58% of 18-to 29-year-olds say they mostly go online through a smartphone, up from 41% in 2013. Still, this growth is evident across all age groups. For example, the share of adults ages 30 to 49 who say they mostly use a smartphone to go online has nearly doubled – from 24% in 2013 to 47% today."

That, you would expect, will continue to increase and ripple through over time as smartphone and mobile connection technology improves, lessening the need for users to go online via any other means.

But the most interesting finding here may be in regards to costs, with Pew finding that:

"For some Americans without traditional broadband, smartphones may help bridge these gaps in connectivity. Overall, 17% of Americans are now “smartphone only” internet users – meaning they own a smartphone but do not subscribe to broadband internet service at home. This share has roughly doubled since 2013." 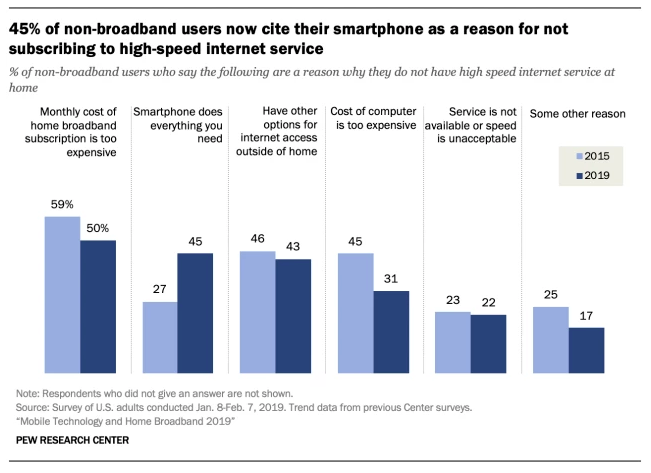 Indeed, 45% of non-broadband adopters, according to Pew's data, say they don't have high-speed internet at home because "their smartphone lets them do everything online that they need to do". And again, with mobile and connective technology improving, you can expect to see this continue to rise.

That finding is particularly interesting because smartphone adoption is generally higher among higher income regions, which, you would assume, would equate to such devices being more exclusive to people with more means.

Indeed, Pew's own research has shown that people on lower incomes logically have a tougher time purchasing the latest technology, which, from a marketing standpoint, you could equate to them not being as 'reachable' on mobile devices.

These new findings show that may not be the case. While technology adoption may be lower based on overall income status, the improvement of mobile offerings looks to actually be superseding the need for other alternatives. If you want to connect with lower income audiences, mobile may well be the best way to go in this bracket too, another key consideration in the larger consumption shift.