With more people turning to Pinterest for inspiration and discovery amid the COVID-19 lockdowns, the company is launching a new feature called 'Today', which will showcase the latest trending ideas from across its network.

"Just click “Today” at the top of your home feed from your iOS or Android app for new ideas each day. Recommendations will include a handful of topics. We’ll start with ideas curated by the Pinterest team and in the future will also feature guest editors." 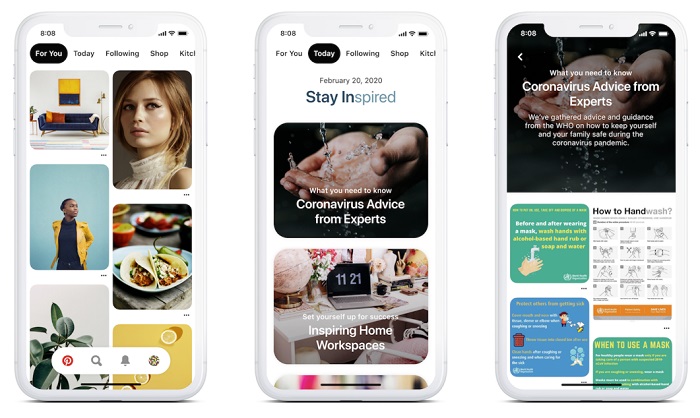 As you can see above, the new section will also, at least initially, feature information on the COVID-19 outbreak, including advice and info from the World Health Organization and the Center for Disease Control.

But, in regular times, the focus will be on trending Pin content. Pinterest says that the main 'For You' feed in the app will remain focused on personalized recommendations, based on the content you've shown interest in previously, while 'Today' will showcase more general popular ideas, "based on what's going on in the world and trending searches". You then, also, have the 'Following' tab, which displays a chronological listing of content from Pinners you've chosen to follow.

It could be a good way to discover new ideas, based on what's gaining traction, which could help broaden discovery among the app's 322 million active users.

And right now, people are certainly turning to the platform for new ideas.

"As people adjust to a new normal, they’re coming to Pinterest to stay inspired. In fact, over the last weekend, we saw an all-time high around the world with more saves and searches on the platform than any other weekend in our history. There has also been significant growth in use cases like planning what to cook, finding lesson plans and craft projects for kids, and tips for growing vegetables. And in the U.S., more people than ever were sending Pins to one another and idea sharing, with messages sent through our Send a Pin feature up 34%."

Similar trends are being seen across all social apps - Facebook, for example, has this week reported a 70% increase in Messenger group video calls, while Twitter says usage is up 23% on the same time last year.

That's no surprise, of course, but it'll be interesting to note what that means for advertising trends and growth figures moving forward, and whether the removal of many smaller advertisers from the market due to shutdowns limits the potential of those larger audience numbers.

Either way, it's a good time for Pinterest to be looking to play a part in keeping people engaged, and a good opportunity to see how users respond to the new option. The expanded audience will provide Pinterest with more feedback to refine the option, which could help to make it a more essential element of the Pin process moving forward.

The new 'Today' tab is rolling out to all users in the U.S. and the U.K. this week, with more regions to follow.