While Pinterest may not be as big as other eCommerce and social media players in the market, its advances in visual search and object recognition have been significant, most notably through the development of its Lens visual search tool, which it first launched back in February 2017.

And this week, Pinterest has announced some upgrades to Lens, while also releasing some new stats on visual search usage on the platform.

First off, on upgrades - in order to help users expand their use of Lens, Pinterest has added a new option which will enable users to save the images of the objects they capture through Lens, rather than merely using them as a search template. 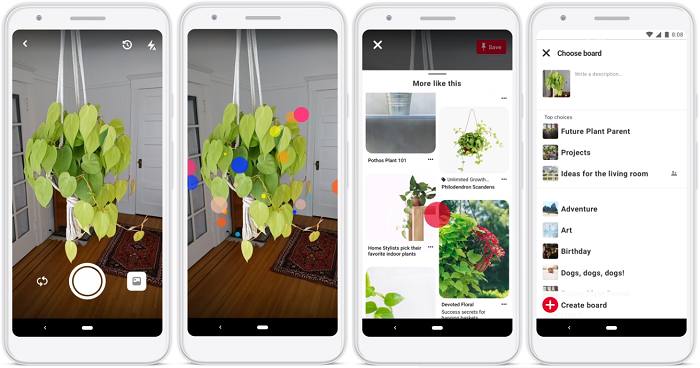 As you can see here, once you 'Lens' an item you see, you can check through the listing to see Lens matches. You can also then save your Lens image to a board - the image itself is not a Pin, but by enabling you to save it, you can keep it for reference, and come back to it later as you go about your product search.

"Now, when you use Lens within a fashion or home Pin, you’ll see Product Pins (Pins with the current price, stock info and a direct link to checkout on the retailer’s site) across results, so you can easily discover visually similar ideas to try or buy."

The addition is part of Pinterest's broader shift towards becoming a larger eCommerce consideration - back in February, Pinterest also announced its fully automated 'Shop the Look' process, which will eventually see more and more Pins become shoppable, growing its visual marketplace.

These news additions to Lens are relatively small, but they do address some key user pain points, and will provide new options. And that could be particularly important when you also consider the growth in visual search on the platform.

In addition to these updates, Pinterest has also reported that:

Pinterest has also reported the expansion of its Lens database, with the system now able to identify more than 2.5 billion objects across home and fashion Pins.

The evolution of Lens is particularly important at this stage, given that Amazon is also working on its own Lens-like tool, and Facebook/Instagram is slowly creeping further into eCommerce territory.

Pinterest's offering is largely unique, with its processes more specifically aligned to Pinners and how they use the app. There is a question as to how viable Pinterest's eCommerce strategy can be, with larger players pushing into the same elements, but at 300 million users, and growing, there's also reason to believe that Pinterest will continue to further carve out its own niche.

The latest Lens updates are rolling out on Android today and on iOS in the coming weeks.