Pinterest has provided an update on its performance, giving investors a look at how it's tracking towards its broader growth goals.

And the company is tracking pretty well - first off, on users, Pinterest is now up to 300 million monthly actives, a 30% increase on a year ago. 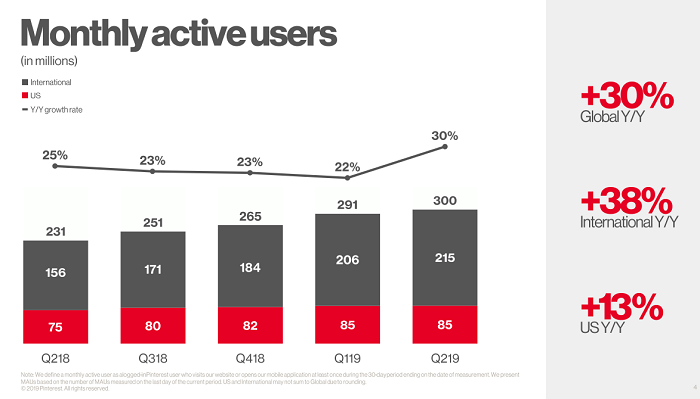 That growth momentum is significant - for example, Twitter's mDAU, it's newly implemented user growth stat of focus, was up 14% YoY in its latest report, while Snapchat's DAU was up 8% on equivalent time scale. That means Pinterest is growing faster than both, which is important to note - especially when you also consider that Pinterest's total user count is now comparable to Twitter, despite it's much lower profile.

Indeed, Pinterest continues to boost its usage numbers, which is something that all brands should be taking note of - because, for one, you obviously want to reach as many people as possible, and Pinterest can increasingly help facilitate that. But the real strength of Pinterest is in driving purchase intent - according to research, some 90% of weekly Pinners use Pinterest to make purchase decisions, higher than any other social platform.

In that respect, Pinterest has actually been moving away from the 'social network' label, as it looks to boost its eCommerce credentials - though for practical purposes, for brands, such framing is largely irrelevant. The fact of the matter is that Pinterest is used by a growing number of people to find products, and marketers should be paying attention.

That said, Pinterest does have some improvements to make on average revenue per user, which is increasing at a steady rate, but given its eCommerce focus, could be higher. 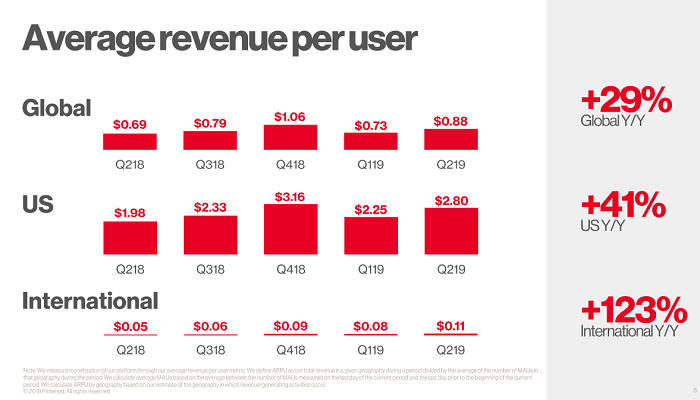 US ARPU is up 41%, which is just below Snapchat (42%), while Pinterest still has a way to go to boost its global performance on this front. That will grow as Pinterest continues to develop its ad offerings in more markets, but it will also need to grow a lot to support the platform's shift in focus towards on-platform selling. If Pinterest wants to pitch brands on its capacity to influence purchase decisions, it needs to demonstrate such - and while revenue per user stats don't factor in the full breadth of eCommerce purchase processes, better linking on-platform exposure to consumer action will help drive ad dollars.

In terms of revenue, Pinterest posted a  62% year-over-year increase to $261 million for the quarter, beating analyst estimates of $236 million. 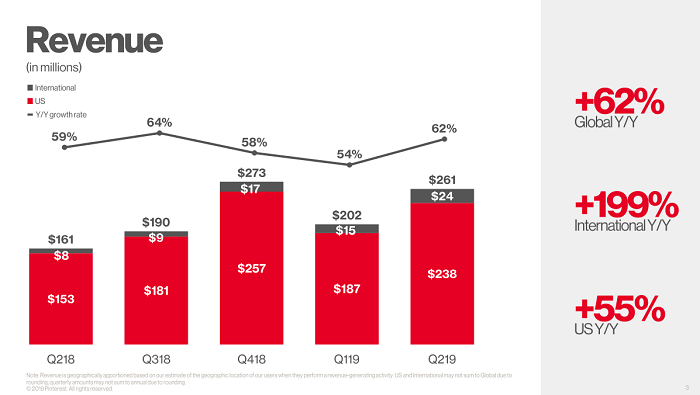 Pinterest shares rose 15% in after-hours trading following the announcement, while Pinterest also noted that it was on track to post a $1.095b dollar revenue result for the year.

It's a good result for the company, with many promising signs - highlights which should be of interest to all social media marketers. If you've not considered Pinterest within your marketing mix, it may be time to give it another look, to log on yourself and see what's being shared in and around your niche.

In addition to this, Pinterest CEO Ben Silbermann noted that it will be looking to bring more videos into Pinterest feeds to boost engagement, along with its evolving business tools.

As we've noted in the past, Pinterest gets less recognition than other platforms, but as you can see, the numbers are comparable, if not better than some of the more hyped platforms.

Worth considering within your strategic considerations.