Pinterest has published its latest Transparency Report, which outlines all of the content removals and other enforcement actions it took throughout the second half of 2020.

And for the first time, Pinterest has included additional data on its specific content moderation efforts, including the number of Pins deactivated for policy violations, and both boards and accounts removed for the same. That provides some interesting oversight into the types of policy issues that are most common on the platform - you can read Pinterest's full H2 2020 Transparency update here, but in this post, we'll take a look at some of the key stats.

First off, on the most common content issues on the platform - as you can see in this listing of total image and Pin deactivations for the period, adult content is by far the most commonly actioned concern in the app. 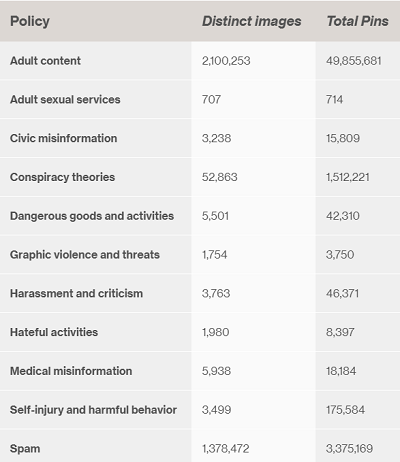 Spam removals are the next biggest element, followed by conspiracy theories, which no doubt saw a jump over the past year.

Pinterest has implemented strict rules around various conspiracy-related concerns, like COVID-19 misinformation and general anti-vaccination content, which has most notably included the complete removal of search results related to such queries.

Which is a drastic step, and one that not all platforms could enact as effectively, but the nature of Pinterest, and the way people use the app, has provided it with more capacity to restrict the reach of such content through blunt enforcement measures like this.

But as you can see, it's still working to remove quite a bit - though Pinterest does additionally note that, in most cases, few of its users ever end up seeing these Pins before they're removed. 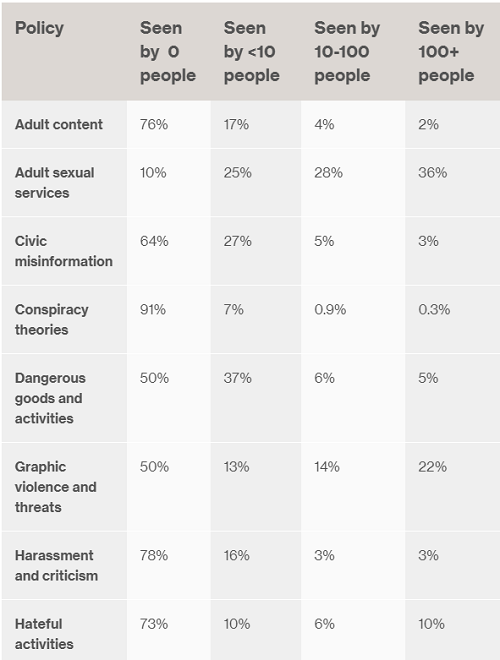 "85% of Pins that we deactivated for medical misinformation were actually never seen by users in this reporting period - even with more than 440 million people visiting Pinterest per month."

Again, Pinterest has some distinct advantages over other platforms in this regard, due to the way in which people use the platform, but it is good to see Pinterest's proactive removal efforts having such an impact, with most rule violating content never getting the chance to gain any significant traction across its network.

Pinterest has also provided an overview of cumulative account and board removals due to violations, which again points to spam and adult content being the main culprits in this respect. 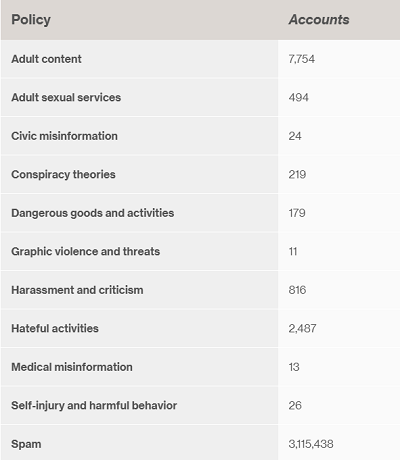 The new data points provide some interesting perspective on the key issues faced by Pinterest's moderation teams, and the ways in which people have sought to use Pinterest to distribute rule-breaking content. While Facebook and Twitter generally cop the brunt of criticism around such, Pinterest too has been used for co-ordinated misinformation and child exploitation content in the past, and as with all platforms, it needs to police such as best it can to limit the impacts.

These numbers highlight the scope of that effort, and it's good to see that, in the majority, most of the reported content is seeing limited exposure among Pinners.