Pinterest has shared its latest performance update, showing steady increases in both users and revenue as the platform continues its push to maximize its business opportunities in more regions.

First off, on users - Pinterest is now up to 478 million monthly actives, a 30% increase year-over-year. 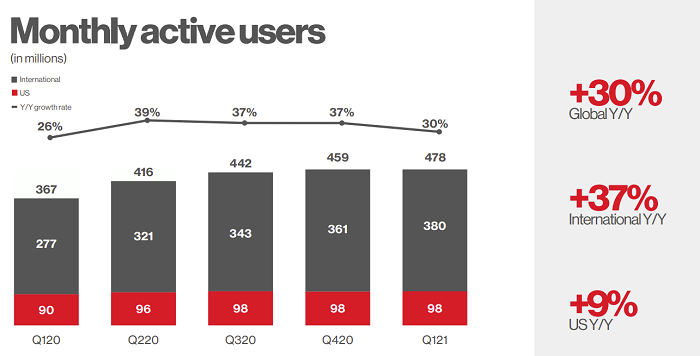 Which is a good result, but as you can see, the platform's growth momentum has slowed on what it had been seeing throughout 2020.

In some ways, that's to be expected. The sudden increase in focus on eCommerce saw Pinterest benefit from a significant surge, as it replaced regular mall visits for shopping, providing connection to a broad range of artisan goods aligned to user interests. With physical stories re-opening, it seems likely that Pinterest will lose at least some of that momentum, and 30% YoY growth is still significant. It's just a little down on what Pinterest had been seeing, which could impact market perception.

Even so, 478 million MAU is a huge amount. That puts Pinterest usage higher than Twitter, LinkedIn and Reddit, with likely only TikTok and Facebook/Instagram currently beating it (though direct comparison is difficult given that each platform now reports different usage data).

Still, Pinterest isn't a social media network, as it has repeatedly stated, with the real focus of the app now on product discovery. And that focus should be reflected, ideally, in its average revenue per user stats. 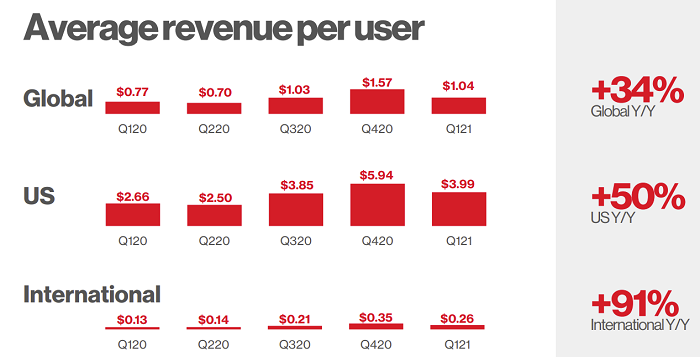 As you can see here, Pinterest's ARPU stats continued to grow in 2020, up 34% YoY. It still has a way to go in maximizing its international audience here, but the numbers show that the platform is improving, and has a lot of room for expansion as it branches into new regions with its more advanced in-stream product match and shopping options.

Pinterest notes that its international business "grew very rapidly during Q1 and comprised nearly 20% of total revenue for the first time". Pinterest launched ads in Brazil within the period, and is planning to expand into more Latin American nations this year.

In terms of overall revenue, Pinterest reported a 78% YoY increase to $485 million, largely driven by "increased demand from mid-sized and managed small advertisers" as well as expansion into international markets. 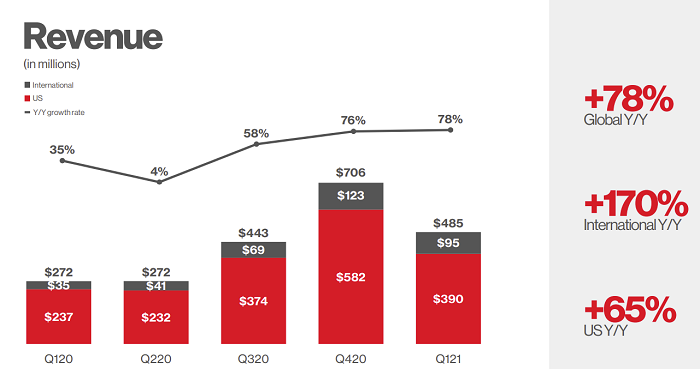 Indeed, Pinterest says that the number of Pinners engaging with shopping surfaces on the platform grew by more than 200% in the 12 months ending March 31, 2021, while at the end of Q1, product searches had grown more than 20x year over year.

Again, that's largely reflective of the broader eCommerce shift, but Pinterest says that early data from the US, which is slowly emerging from the pandemic, has been positive for its ongoing expansion.

"Based on what we’ve observed in the U.S. recently, we believe that post-COVID shopping engagement could be more resilient than overall engagement. It isn’t enough for Pinners to be able to find inspiring products and services on our platform. We must also make it easy for them to buy the products that bring their dreams to life. To that end, we plan to begin testing seamless on-platform transactions later this year."

This is really the next stage for Pinterest - emerging from a social platform/shopping experience, into a fully-fledged eCommerce discovery platform. It's already well on its way in this respect, but improved, integrated shopping experiences will further enhance that process, while Pinterest is also working to streamline its on-boarding processes for merchants, in order to make it as easy as possible for people to upload a product catalog and convert their listings into product Pins, which can facilitate purchases in-stream.

On this, Pinterest expanded its partnership with Shopify to 27 new countries just last week.

That expansion points to even more opportunities for the platform, which, through pure scope, should be able to maintain its growth momentum, even if there is a slowdown in eCommerce activity in the wake of the pandemic.

Which, it's worth noting, is not over yet, and could have significant impacts on shopping activity, in many regions, for some time yet.

Overall, it's a strong result for the platform, which still feels like an underrated resource, and overlooked opportunity by many social media marketers. If you haven't familiarized yourself with the emerging world of Pins, and the potential opportunities for your brand, it's well-worth taking a moment to search through the app, and check out what other brands are doing - and considering whether that might be worth investigating for your business.

You can check out Pinterest's full Q1 2021 results overview here.