For a long time, AR has been viewed by many to be the bridge between in-store and online shopping, providing the ability to digitally 'place' items in your real-world environment and get a sense of what they might look like in your life.

But there are various limitations to this - for one, AR tools are not 100% responsive, which can make comparative scale problematic. Also, AR is expensive and tech-heavy, which often leaves such options out of reach for many businesses.

But Shopify is on a mission to change that - take a look at this new preview of Shopify's 'AR Quick Look' tools for Shopify listed products.

"We’re committed to making the incredible business potential unlocked by augmented reality more accessible for small businesses. That’s why we’ve built a services marketplace to help our merchants create 3D models of their products. With Apple’s recent announcement of AR Quick Look, we can now enable these 3D models to be viewable in AR directly through the Safari browser on iOS 12 devices - without the need for a separate mobile app or a clunky headset."

AR Quick Look is available as part of Apple's ARKit 2, and built into iOS 12, which means the capacity is available within Safari, an important distinction for adoption.

As noted by Jordan Schau of Pure Cycles (who's featured in the video above):

“Getting someone to download an app [with AR capabilities], and then use that as their main shopping app offers major friction for the user. But having it just baked into the browser - Safari, which is already taking an increasing share of our traffic - I think it's just going explode.”

Indeed, that's an important step - while Pinterest offers its AR Lens tool, and brands like Ikea have tried similar, AR placement apps, the usage of those tools is comparatively low. Pinterest, for example, has a total of 250 million users (and doesn't offer the same placement functionality at this stage, though it is reportedly in development), while Safari retains nearly half of the market share for mobile browsers, which means, according to Shopify, that with iOS 12 "a significant portion of Apple devices will be ready to shop with AR".

That could make it a very compelling option - and with some 600,000 merchants on Shopify, the potential scale is significant, if the functionality takes off.

That remains a big 'if', but the process does offer a preview of what we might be able to expect from future AR shopping developments. The majority of shoppers still make purchases in-store, but eCommerce is continually rising, and new developments like this have the potential to change the game for retailers more broadly. There are, of course, elements that can't be re-created online (trying on clothes, for example, is safer in-store), and there are economic impacts, in regards to the gradual shift away from shopping malls to stay-at-home purchasing.

But Shopify's tools definitely show a lot of promise - and this is only the beginning. As AR functionality advances, you can expect all the major social platforms to offer similar product view and ad tools. 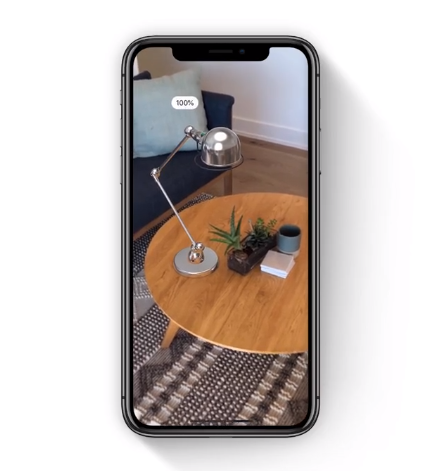 It's not going to become the way to shop overnight, but its certainly an interesting glimpse into the future of online shopping.