Pinterest has this week announced that it's hit a new milestone of 250 million active users, and the platform has continued to grow, it says, on the back of positivity, in variance to other social apps in the market.

“At a time when the internet can feel increasingly negative and politicized, we think it's remarkable that a quarter of a billion people are choosing to spend their time on Pinterest, a place that helps them feel positive and optimistic about the future.”

That, in part, could be attributed to Pinterest moving away from the ‘social’ elements of its platform in favor of eCommerce. Pinterest CEO Ben Silberman has repeatedly noted that Pinterest is not a social network, and the app’s various updates and new tools have virtually all related to increased exposure for products, with an eye towards making it the key destination for discovery and purchase.

Pinterest still has a way to go on this front, particularly in regards to the expansion of on-platform selling, but it’s clear that social interactions have become less of a focus, which somewhat removes the app from the debate around the negative impacts of online interactions.

And while 250 million users pales in comparison to the audience of Facebook or Instagram, it is worth noting that Pinterest is growing faster than several rival networks (if they can be called that, considering Pinterest isn’t a social platform). 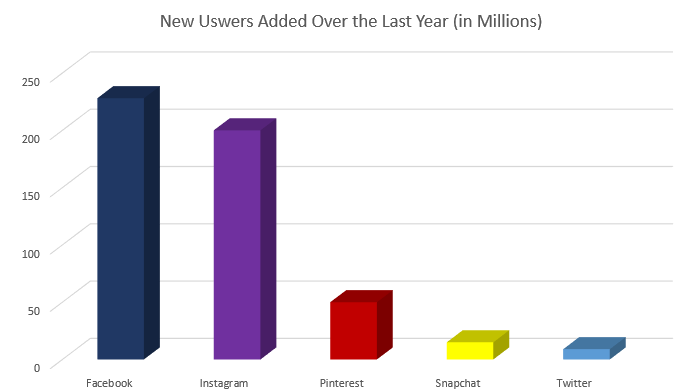 So while it may seem like a lesser achievement for Pinterest to hit 250 MAU – as opposed a billion on Instagram – the platform is still growing at a steady rate. That slow and steady approach has reportedly been the cause of some angst within the company, but it is paying off. It’s not moving as aggressively into new territory as, say, Snap Inc., but it's clearly doing something right.

And activity on the platform is also increasing in step - according to Pinterest, there are now more than 175 billion Pins on its network, up 75% since early last year.

Among the most popular categories, Pinterest says that they’re seeing significant growth in users pinning:

Most of those are sectors commonly associated with Pinterest usage, but it is worth noting the scale of growth in each, and considering the potential options for your business.

Worth also noting, Pinterest says that 80% of the platform’s new sign-ups now come from outside the US. The platform’s international growth has been spurred by Pinterest adding in more region-specific Pin recommendations and tools, another consideration for your strategy.

Again, while Pinterest isn't growing at the scale of some of the other platforms, it is on track to book $700 million in revenue this year, representing a 50% increase over 2017. The platform continues to add new ad options, new users, and its use case, in relation to eCommerce, continues to expand.

It may not give you the reach of Facebook or the hype of Snapchat, but Pinterest may offer something more valuable – exposure to users who are looking to spend.