Snapchat has established a new deal with Universal Music Group (UMG), which will enable Snap users to add song clips from UMG artists via its in-app Sounds library. In addition, Snapchat’s also looking to add curated playlists within its Sounds options which will make it easier for Snapchatters to find audio content for their Snaps. 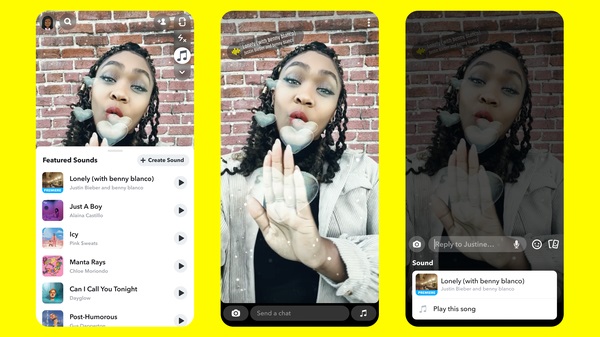 Snapchat first launched Sounds late last year, after a year of negotiations with various music labels. Sounds enables users to add music to their Snaps, pre or post-capture, from a curated catalog of music.

At launch, Snapchat offered audio clips from Warner and Sony artists, and now, it will also add Universal’s roster into that mix. UMG artists include Lady Gaga, Rihanna, and 50 Cent, among many others.

The option, in some ways, comes in response to the rising popularity of TikTok, which is heavily centered around music and sounds, which fuel many of its in-app trends. As a result, all apps have been making music a bigger focus. YouTube recently reported that it paid out over $4 billion to the music industry over the last year, while Facebook announced an expansion of its partnership with Spotify, which will enable users to share and listen to full-length music tracks direct on Facebook.

And clearly, music can play a big role in boosting on-platform engagement. The majority of the most viewed videos on YouTube are music video clips, and as noted, with TikTok now fueling all new music trends, the app is even influencing how musicians name, and create tracks, as a means to maximize exposure.

As such, it makes sense to see more platforms increasing their focus on this element.

In addition to this, and as reported by Next Reality, the UMG deal will also see more UMG artist-related AR Lenses appearing in the app's carousel as part of its broader promotional efforts. Snap creators will also be able to use UMG tracks in Lenses, via Lens Studio.

Snapchat also notes that it's looking to expand its curated 'Playlists' inside Sounds to help users find the right track to fit, more effortlessly.

“Playlists will focus on genres, moods and moments that are relevant to our community, as well as songs that are trending on Snapchat.”

Snapchat already has a few categories available in Sounds including “Mood,” “New Artists,” and “Love,” which it will now look to build upon to maximize music usage.

Will that make music a bigger consideration in Snaps? It’s hard to say, but along with the popularity of its own TikTok-esque 'Spotlight' option, it could see Snap better align with key usage trends, which could have expanded engagement benefits.

You can read the full description of the updates from Snapchat newsroom here.