Snapchat Adds 'Sounds' Option to Include Song Clips within Snaps

Snapchat has today announced a full launch of its new 'Sounds' functionality, which enables users to add song clips into their Snaps. 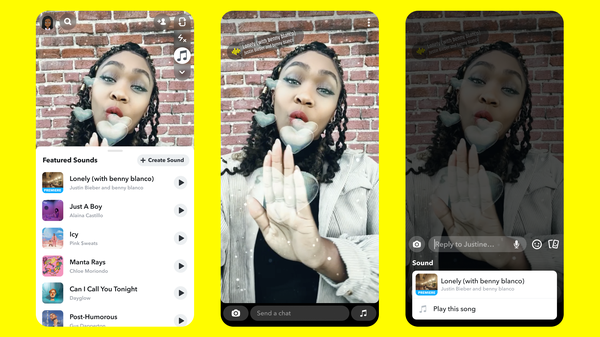 As explained by Variety:

"With Sounds on Snapchat, users of the iOS app worldwide can add music to their Snaps (pre- or post-capture) from a curated catalog of music. Snapchatters can add music before recording video by selecting the Sounds tool (with the music notes icon) on the right-hand side of the Camera screen and choosing a track from the Featured Sounds list. Alternately, they can select a track from the Sounds tool after taking a Snap."

Snapchat launched an initial test of the TikTok-esque feature in Australia and New Zealand back in August, and now, it's getting a proper launch - though only on iOS at this stage.

The option is a result of Snap's negotiations with music publishers over the last year on new deals to allow for music sharing within Snaps. That push was likely exacerbated by the rising popularity of TikTok, which has made music clips a central part of its offering, and amid the rumors of a possible TikTok shut down in the US - which ultimately look to have amounted to no action against the app - Snapchat has sought to implement its new music options faster, in order to gather up any TikTok refugees looking for a new place to share the same type of content.

And now, everyone will be able to try the option out. To celebrate the broader rollout, Snapchat's also premiering an exclusive clip of the latest song from Justin Bieber, which will no doubt boost attention for the tool.

Now to see whether Snapchat's Discover feed starts to resemble TikTok as a result, with trending song memes and dances flowing into the app. Snap marketers should take note of any such shifts.

'Sounds' is available in Snapchat on iOS from today, tap on the music note in your composer to get started.