Snapchat has announced a new update for its Scan tools, which will provide more ways to use the Snap Camera to discover additional insights, and facilitate more direct actions based on what you see.

Snapchat first added its Scan option two years ago, providing another way for Snap users to glean information via the app. And while it hasn’t become an essential element, Snap has continued to add more functionality to the tool over time, and with people now more accustomed to scanning barcodes as part of COVID-19 tracing efforts, that action is now become more habitual, providing more opportunity for Snap’s tools in this respect.

First off, Snapchat is making the Scan function more central, by placing it right on the main Camera screen of the app.

As you can see here, now, the Scan option is right at the middle of the lower function bar in the app.

“This update brings the Scan button front and center on the main Camera, making it easier than ever to find fun and helpful experiences in categories including fashion, food, plants and more.”

That, ideally, will prompt more users to try out Scan, and see what the tool offers, which could help increase adoption and usage.

Which plays a key role in this next update – Snap is also rolling out a new shopping experience, directly via Scan, which will provide specific product matches based on your scanned product image. 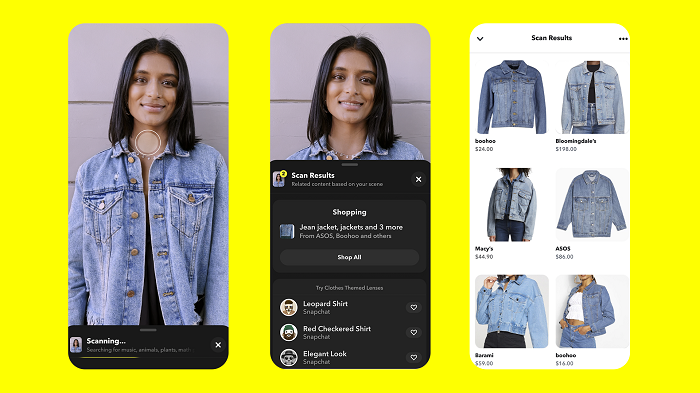 Like most social platforms, Snapchat has slowly been moving into eCommerce, and facilitating more direct buying options in the app. Snap has made AR a focus in this respect, with advanced Try-On tools and digital sizing options, while it’s also looking to integrate more digital clothing options, like products for your Bitmoji characters.

That points to the rising interest in virtual items, and the Metaverse concept, where your digital avatar will increasingly become a representation of yourself. That’s another element that Snap’s working towards, ensuring that it remains in touch with that evolving concept, but the more practical, immediate value of its Scan updates will help to better bridge these two elements, and facilitate more direct linkage between real and virtual buying concepts.

In addition to this, Snap users will also be able to use Scan to shop via pre-captured images, not just new ones taken in the app.

“People love to take screenshots of things they see online and come back to it later, and with Scan, we’re making that easier than ever. Just tap into your screenshots and use Scan technology to find and buy those outfits with shopping capabilities through Memories.”

The new Scan shopping elements are being rolled out in stages across both iOS and Android from today, with Shopping from Memories planned for the coming months.

And finally, Snapchat is also rolling out its new Camera Shortcuts feature to all users.

The addition adds another way to use Snapchat’s evolving detection tools to improve your in-app usage.

The evolution of Scan goes hand in hand with the shift towards AR, and overlaying digital content onto your real-world view, and Snapchat notes that, eventually, its Scan elements will be integrated into a fully AR-enabled Spectacles experience.

Snap’s working on that next stage for Spectacles, just as Facebook and others are developing their own AR wearable devices, which will move that interconnection between on and offline to another level entirely.

Scan is something of a precursor to that, and as noted, with the broader adoption of QR code scanning as a tracking measure to help mitigate the spread of COVID-19, now is the right time for Snap to be making a bigger push on facilitating that device connection, more so than in times past.

These new additions provide more functionality, and more purpose for its Scan options, which could make it a bigger element within the Snap experience.

And as that development continues, marketers should be taking note, and considering how the same functions could align with their promotional efforts.