Facebook is today holding its Facebook Connect AR/VR showcase event, where it's providing an overview of the latest advances in its next level virtual and augmented reality tools.

And there are some major updates of note - here's an overview of some of the key announcements.

The major announcement of the event is Facebook's new Project Aria smart glasses, which Facebook staff are now experimenting with in the real world, and is expected to be released to the public next year.

"Imagine a pair of glasses that add a 3D layer of useful, contextually-relevant and meaningful information on top of the physical world. Such a device could help us perform everyday tasks better — like finding your keys, navigating a new city, or capturing a moment; but it could also open up an entirely new way of moving through the world."

Project Aria is the first step in this process. The initial Aria prototypes will not provide AR overlays within the lenses, but will essentially be research devices, helping Facebook gather data to support the development of things like head-tracking, eye-tracking, and audio algorithms. These insights will eventually inform the development of fully functional AR overlaid vision.

The next step, then, will be consumer AR glasses - for which, Facebook is partnering with EssilorLuxottica, the makers of Ray-Ban, to build fashionable, Ray-Ban branded smart glasses, which will are set for release in 2021.

This is a major step for Facebook. The company has been exploring the possibilities of AR glasses for years, with CEO Mark Zuckerberg noting back in 2017 that they were still "five to seven years away" from reaching the next stage with such a device.

It seems that his prediction wasn't too far off, and over the last few months, Facebook has been ramping up its acquisitions and development processes in order to make fully functional AR glasses a reality.

This could be a game-changer for Facebook, bringing the digital and real-world together via helpful, digital overlays on your everyday view. The possibilities are massive, and if Facebook can indeed bring functional, fashionable AR glasses to market by 2021, that will give the company a significant edge over rivals like Apple and Amazon, which is also looking to develop the same.

VR is also a key focus for Facebook, and on that front, Facebook has unveiled the next generation of its most popular VR headset, with the Oculus Quest 2 to be released in October this year.

"Oculus Quest changed the game for wireless VR. It delivered fresh experiences for enthusiasts and new opportunities for developers, all while introducing immersive gaming to newcomers across the globe. Today, we’re excited to announce Oculus Quest 2, the next generation of all-in-one VR."

VR has seen a significant uptick in interest this year, with the COVID-19 lockdowns prompting people to seek out alternate forms of entertainment. That's enabled Facebook to put even more focus on its next level VR tools, and advanced systems like the Quest now make it much easier for people to link into VR worlds, which Facebook also believes will be the future of social networking.

The Quest 2 starts at $299 USD, with pre-orders are open now for the device.

Facebook has also announced the expansion of its third-party AR development program to Messenger, and to its Portal smart speaker device.

"Every month, more than 600 million people use Spark AR across Facebook and Instagram. More than 400,000 creators from over 190 countries have published Spark AR effects for Facebook and Instagram. Together, they’ve published over 1.2 million AR effects to date. And beginning next year, we’ll open up Portal and Messenger to Spark AR creator publishing, giving more people fun new ways to connect."

Facebook renamed its camera effects platform to Spark AR back in 2018, as part of a broader push to open up its creation tools to all users.

By enabling all creators to build their own AR effects, Facebook then increases its capacity for hosting popular, even viral AR filters and tools - which has already seen both Facebook and Instagram benefit from user-created AR trends, like the 'Which Disney Character Are You?' and '2020 Predictions' effects that went viral on Instagram earlier this year.

WOW the last two days have been crazy. Thanks to everyone who used the filter. You can find an updated version of it on my profile ???? Stay tuned for the next ones ???? So what will you be in 2020? Ps. Yes, I've misspelled fabulous ahaha gonna make up for that

Now, creators will also be able to make effects for Messenger and Portal, expanding their canvas for expression.

Facebook has also shared a brief overview of coming AR ads for Instagram, including virtual 'try-on' ads for make-up, and an option to digitally place furniture in your home via AR tools. 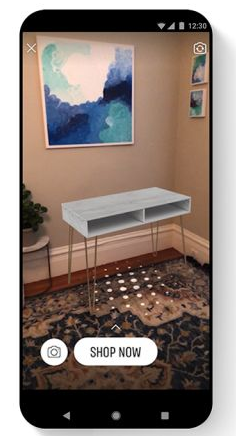 News also remains a focus for Facebook, with the platform still developing and rolling out its dedicated news tab in more regions.

And this could become a key element in driving its news push - Facebook has announced a new partnership with The New York Times which will see Facebook co-develop AR filters and effects on Instagram in order to help users contextualize New York Times journalism. 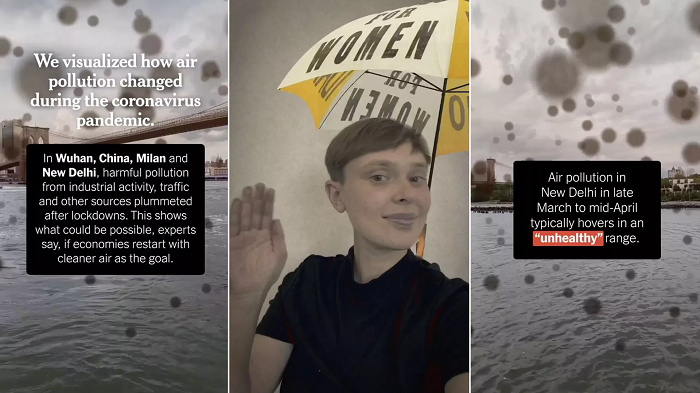 "To get the partnership off the ground, The Times has built a dedicated "AR Lab" team within its research and development unit of more than a dozen employees. [...] The first few filters from the launch series will include visual interactive pieces tied to the centennial of women’s suffrage, coverage of the California wildfires and air quality during the COVID-19 lockdown, as displayed in the picture above."

In some ways, this is similar to Facebook's original push for its Instant Articles product, in that by using Facebook's native, digital creation tools, publishers are then able to create more engaging, responsive and digitally native journalism, made specifically for the Facebook audience.

But AR tools are a whole other element, which could indeed make publisher created content more engaging, by adding interactive, contextual elements that help to communicate key elements.

And with Facebook currently grappling with the role it plays in the distribution of news content, on various fronts, innovations like this could actually also work as a form of editorial control. By partnering with specific publishers, Facebook would have final say over who can participate in this program, which could help it amplify mainstream, reputable publications over less scrupulous outlets.

How you view that will come down to your view on the mainstream media, but much like the News tab, Facebook would essentially be able to select partner publishers to build its AR experience tools with, enhancing its news offerings.

Facebook is also working on new VR innovations to facilitate work collaboration in replacement of the physical office. Which, after the events of 2020, will likely become a bigger focus for many businesses.

As you can see here, Facebook's Infinite Office VR experience is a virtual office space which will enable users to conduct meetings, work on several surfaces, collaborate on projects, and more, all within a digital environment.

Facebook has been testing various VR alternatives for working from home, and Infinite Office is the next major step. And again, with more businesses now considering the benefits of allowing their staff to log in remotely, this could become a key use case that helps boost the use of VR in the home.

There's a lot to take in here, and even more technical detail and specifics for each element which will influence how they're actually applied and utilized. But this is the next shift for The Social Network - VR and AR are where Facebook is looking as it sets itself up for the next major consumer shifts.

And we may be closer to that next stage than you think, with AR glasses, in particular, set to transform how we connect with the world around us, and likely each other.