Snapchat will now be able to facilitate more creative audio options within Snaps via a new deal with NBCUniversal, which will enable Snapchatters to include audio clips from a range of popular TV shows and movies within their Snaps. 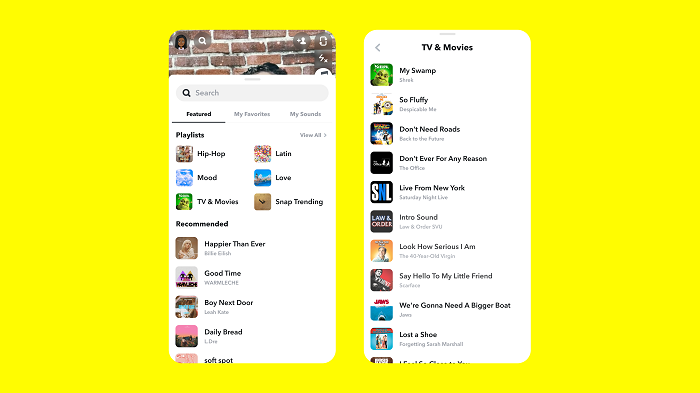 “Today, we’re excited to announce a new deal with NBCUniversal so Snapchatters globally can add audio clips (famous quotes and theme music) to their Snaps from NBCUniversal’s robust catalog of movies, television series and original programming.”

As you can see from the above image, that will enable users to include audio clips from movies like Shrek and Despicable Me, as well as TV shows like SNL, The Office and more.

It could be a popular addition, with simple access to a range of audio snippets from shows to add another angle to your chats.

“When your friend sends you a Snap with a Sound, swipe up to view the key art and title of the movie or series from which the audio clip is derived. A “Play This Sound” link will open a webview powered by Linkfire so you can access the relevant content via the streaming platforms on which it is available.”

Similar to the way that song clips have become officially licensed in all of the major apps, the benefit for NBCUniversal is more direct connection to the source content, as opposed to people, say, sharing GIFs from shows, which can help to promote their content, and boost brand awareness, but don’t include a direct link back to the source material.

Establishing more direct connection gives the publisher more control and insight into content use, and that additional usage data, which will also go back to NBCU, will further enable it to tap into rising trends, source future licensing agreements, etc.

And for Snapchat users, it’s another creative tool to add into the mix. The app officially launched its music clips option last October, seen largely as a response to the rising popularity of TikTok, and audio snippets adds another aspect, broadening your creative and response options in the app.

Expect to see NBCU and other publishers establish similar deals on other platforms soon.