Today is International Friendship Day, and Snapchat is all about friends, as the company has repeatedly told us.

Marking the event, and in addition to the above video, Snapchat has also published a new listing of stats on how Snapchatters around the world use the app to stay connected, including regional variances in in-app habits.

"Hanging out with friends today looks very different than it used to - virtual dance parties, video chats, and socially-distanced walks have taken the place of typical get-togethers. But while the way Snapchatters connect with one another has changed, their friendships are even more valuable than ever."

Based on user surveys, Snapchat has found that the number of people that users look to stay connected with via Snap varies by nation: 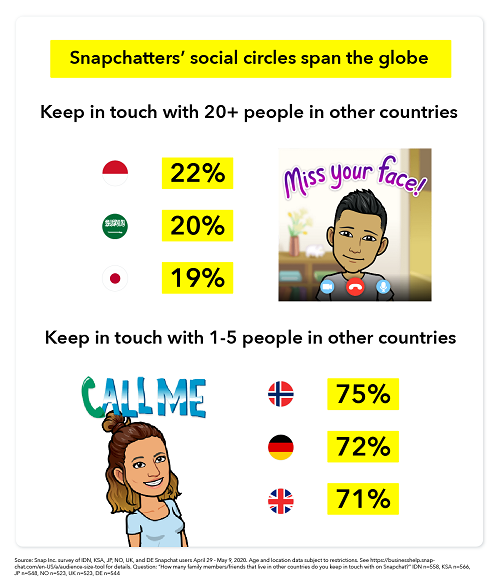 It's interesting to consider regional variations in usage like this, and how that relates to people's in-app activity. The insights show that some users are looking to maintain connection with larger groups, while more commonly, Snapchat these days appears to be used for engaging in smaller, more intimate, and private chats.

Snapchat also notes that users in all regions have been using Snap more during the COVID-19 lockdowns, and not just to view Discover content. They're also sending more messages between each other, and interacting within the app. 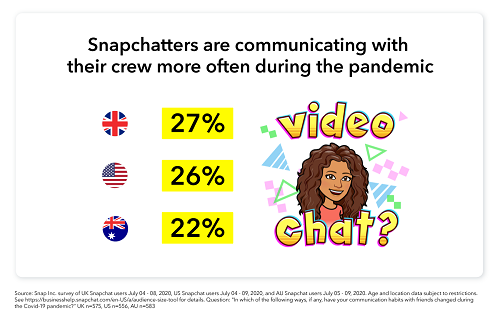 Of course, all social apps are seeing increased usage amid the lockdowns, so it's little surprise that Snap is also seeing usage increases. But what Snapchat is specifically looking to highlight is the fact that users come to Snapchat to interact with each other, the app has become a key interactive platform for many groups.

That engagement is what differentiates Snap, and has enabled it to keep a hold on users despite challenges from Facebook and Instagram. People go to Facebook to share their opinions and stay in touch with a broader set of family and friends, they go to Twitter to keep up with real-time news, and Instagram and TikTok provide quick-hit entertainment. Snapchat now falls into a similar use-case to Messenger, though Snap seems more aligned with private, personal interactions, away from your regular contacts.

Snapchat is looking to build on that with improved entertainment and discovery options, but it's also important for Snap to underline that friendship angle, and establish itself as the place to stay connected.