Snapchat has this week hosted its first ever Partner Summit, outlining a range of new initiatives and tools designed to help third-party developers and businesses make best use of the Snap platform, and to help the company continue to boost its business potential.

Snap CEO Evan Spiegel opened the inaugural Summit, with a short speech outlining the company’s ongoing mission, while also providing some insights into the company’s growth and development – and avoiding the concerns with the app’s stagnating growth in overall users. 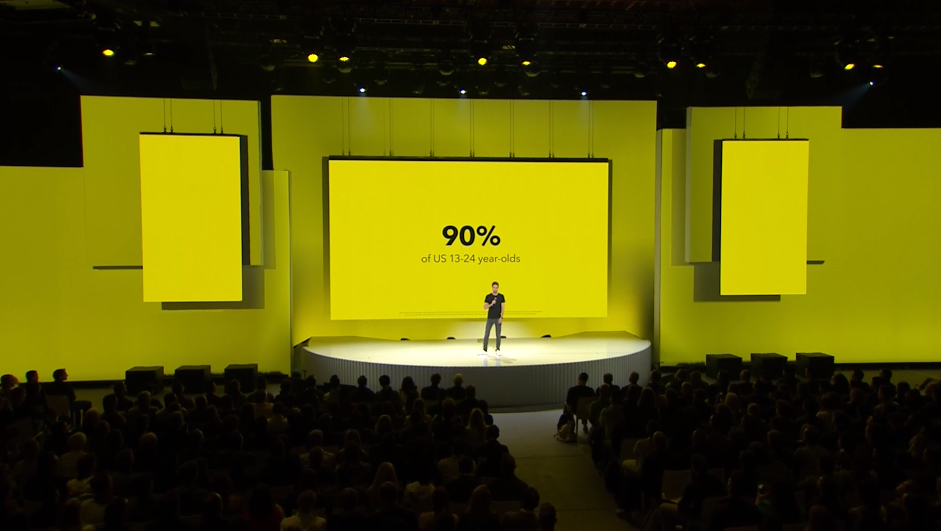 Spiegel specifically focused on the app’s reach with younger users, noting that:

“[Snapchat reaches] more 18 to 24 year-olds than Facebook or Instagram in the United States, the UK, France, Canada and Australia. That’s because Snapchat empowers people to express themselves. On Snapchat, you’re free to be you, with your real friends.”

A not so subtle dig at the downfalls of public broadcasting, which Facebook itself has now acknowledged, and which is a key element in The Social Network’s new shift towards more private messaging.

“[Cameras are] a window into the way that we experience the world. The Snapchat camera changes how we see, how we speak, how we shop, how we tell stories, and so much more. But more importantly, our camera lets the natural light of the world penetrate the darkness of the internet.”

Following his opening, Spiegel welcomed co-founder Bobby Murphy, who went into the first announcements of the day – here are the key elements that were outlined as part of the event.

To start with, Murphy noted the popularity of Lens Studio, explaining that more than 400 thousand new lenses have been created in the tool since launch in 2017, while people have ‘played with’ those community created lenses over 15 billion times.

To further facilitate and encourage Lens Studio usage, Snapchat will soon be rolling out Creator profiles – “dedicated spaces for Lens creators to showcase their work and connect with their audience”. 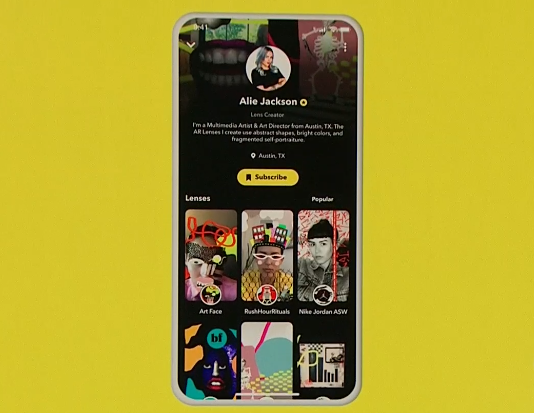 Snapchat’s also adding some new tools and templates to Lens Studio to enable more complex Lens creation – creators will soon be able to incorporate hand movements, body movements and even their pets in an expanded Lens creation toolkit. 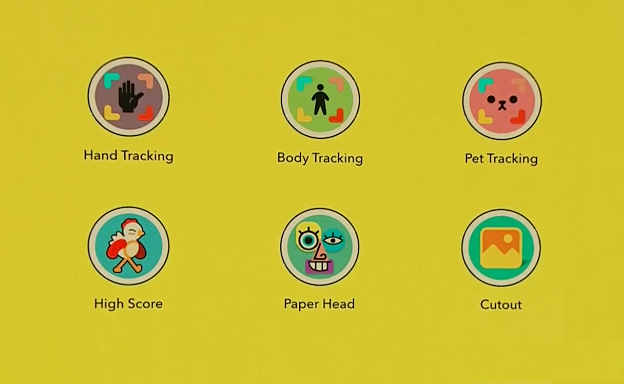 And a big new addition - Snap’s also launching a new ‘Landmarkers’ option for Lenses, which will enable creators to build Lenses on top of global landmarks, in order to provide a fresh perspective on the buildings and monuments you know.

Using publicly posted Snaps, the Snapchat development team has put together 3D models of some of the most popular global landmarks – at this stage, you can use The Eiffel Tower, Buckingham Palace, the Flat Iron Building in New York, the Capitol Building in Washington and the Chinese Theatre in LA. Using these templates, creators will be able to build totally new experiences, stretching beyond the generic tourist photos.

The option has actually been in development for years - Snapchat first filed a patent for the tool back in 2015.

Snap’s also looking to expand the core functionality of the Snap Camera, incorporating new functions like the capacity to find GIFs (via Giphy) by scanning in any image or object, and the ability to solve written math equations by scanning them in (via Photomath). 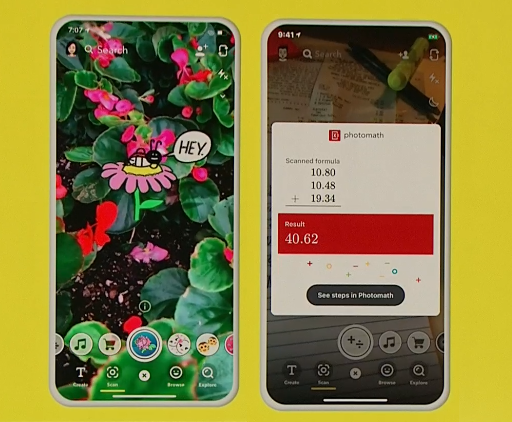 To facilitate all these new functions, Snapchat will also be rolling out a new ‘AR bar’ along the bottom of the Snap screen, helping to better separate the various tools. 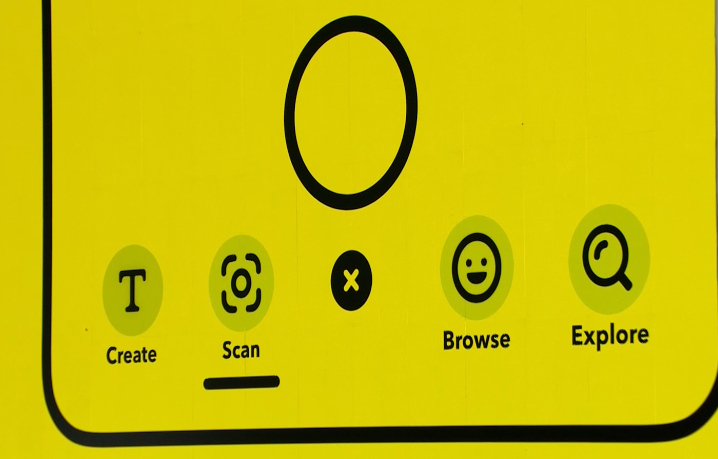 The new format will be rolling out to users gradually, so you can expect to see a change in your Snap presentation sometime soon.

Snapchat’s also making upgrades to its developer and integration options, offering even more ways to share what you’re doing in different apps and tools direct to Snapchat.

Using its various integration options - BitmojiKit, CreativeKit, StoryKit and LoginKit – Snapchat’s looking to empower more in-app sharing, which will include new content share integrations in a range of music and media tools - “which will be great for publishers and eCommerce providers”. 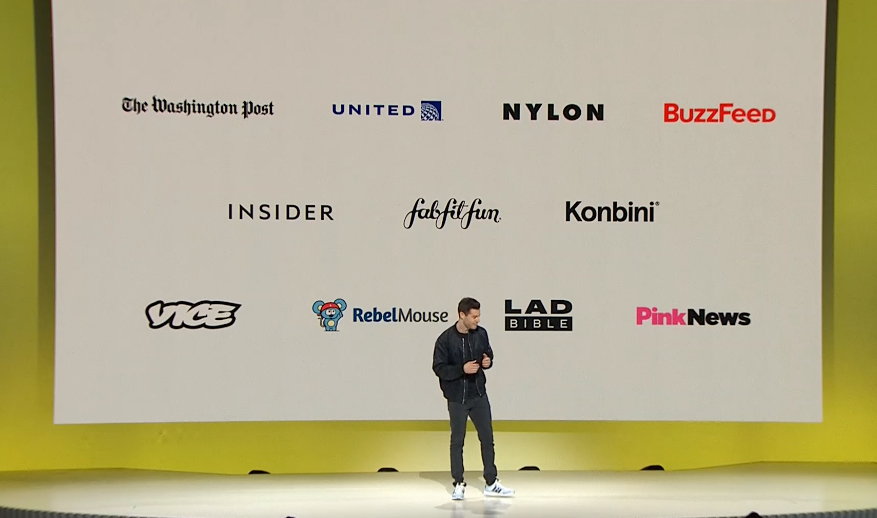 Snapchat’s also looking to expand the capacity of its StoryKit, with a new option that'll enable developers to facilitate Story sharing into their apps.

For example, Tinder will soon use StoryKit to enable users to share their latest Snap Story upload direct to their Tinder profile, providing a more comprehensive perspective on who they are and what they’re interested in. 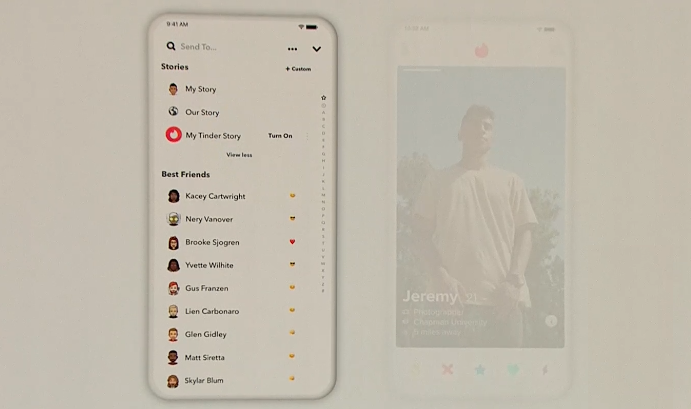 Interestingly, Snap also highlighted a new Stories integration with group live-streaming app Houseparty. Houseparty has proven very popular with younger users, so the combination makes sense - but indications have also suggested that Snapchat may be looking to add its own live-streaming element. It could still do that, of course, but the integration, as noted, is interesting.

Lastly, Snapchat's also adding a new option called AdKit, which will enable developers to access the new ‘Snap Audience Network’, which will bring Snap ads to third-party apps. Several social apps offer the same capacity, expanding on-platform ad tools to new surfaces. There’s not a heap of information to go on at this stage, given it’s just been announced, but it will eventually provide new reach opportunities for advertisers.

Snapchat is accepting applications for StoryKit and AdKit from this week.

Shows were the main focus of Snapchat’s presentation on the evolution of its Discover tools. According to Snap, Over the past year, the time users have spent watching Snap Shows - short (3-5 minutes), TV-like video programs from approved partners - has more than tripled on the platform.

Big Snap show winners have been NBC, E News and ESPN, and Snapchat’s now looking to rollout a new, daily show from BuzzFeed to further capitalize on that interest.

In addition to this, Snapchat also showcased its growing slate of Snapchat Originals – unique, vertical video programs made exclusively for the app. Some of Snap’s originals are now hitting audiences of 20 million plus, and Snap’s also developing more innovative, engaging ad formats in line with these programs to maximize its business opportunities from that attention.

Snapchat's also looking to add another element to its messaging experience with the addition of a new games platform to encourage group play.

The new games will be available via a new rocketship icon in your messaging stream – the first game to be launched is called ‘Bitmoji Party’, which lets you play competitively with friends within the app. 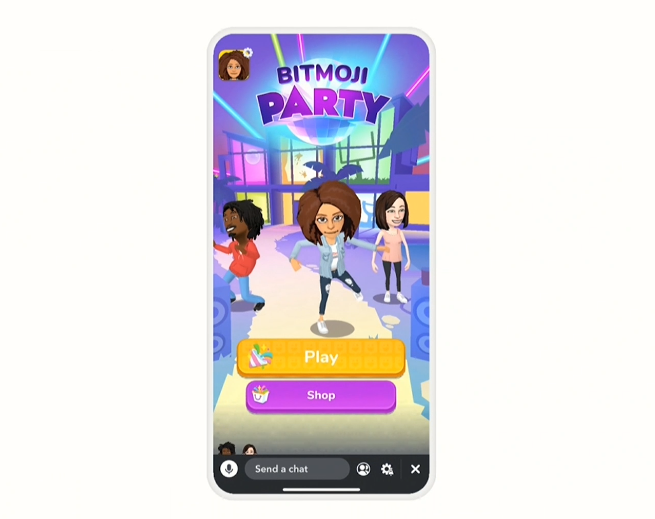 Facebook, too, has been making a push on group games, but Snapchat’s look to be more expansive, at least based on this first example.

Snap says that it’s crafted its games experiences to focus on in-game communication and interaction, including live audio chat in-game, maximizing the intimacy of the experience. Rumors have been swirling about Snap's coming games platform over the last few months.

There’s a heap to consider here, a heap of new opportunities within Snap. As noted, there are still lingering concerns about the app’s slowing growth, but its popularity among younger users, along with these new ways to connect, show that there’s still a lot to like about Spiegel and Co’s creation, and a lot of future potential.