Snapchat’s adding a new way to help users discover live events, with a new Snap Map feature, created in partnership with Ticketmaster, which will display all listed events near them. 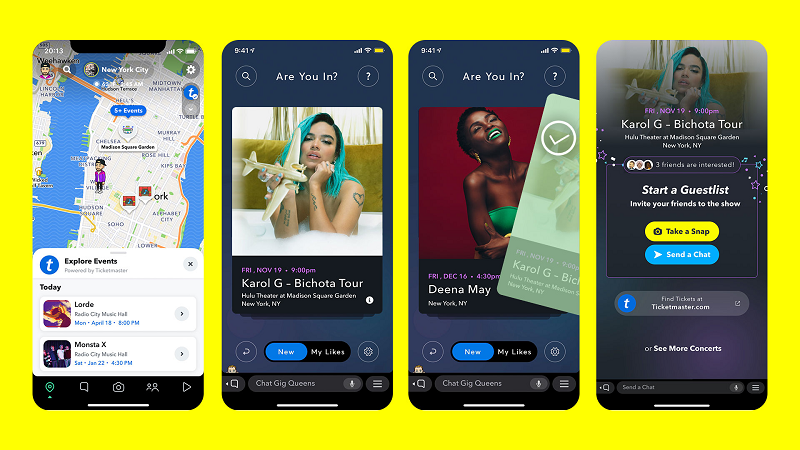 As you can see in these examples, the new Ticketmaster Snap Map layer, activated via the toggle at the top right of the map screen, will show all the events that Ticketmaster has listed nearby. Users will then be able to swipe through, and if you find something that you’re interested in, you’ll be able to share it with your connections in the app, or even buy tickets in-stream.

“Using the new Snap Map Layer, Snapchatters can browse Ticketmaster’s complete catalog of upcoming events based on what is happening nearby. There, they can see everything from comedy to sports, concerts from today’s big stars or indie shows from latest up and comers. Once they find a show that piques their interest, they can tap in and invite their friends though stickers that plug right into the Snapchat Camera, or even buy tickets then and there through a seamless checkout process.”

The feature works in partnership with the Ticketmaster Snap Mini, which enables users to highlight events of interest to them, and get alerts for similar in future.

It’s a good update, which makes particular sense for Snapchat, with the app’s younger audience more likely to be looking for upcoming events and gatherings, which they can then share with friends and organize nights out, all in the app.

Which is in line with Snap’s focus use case of keeping friends connected. While other social apps have increasingly moved towards expanding your audience and maximizing exposure, Snap is geared around more intimate connections, and that use case has helped establish its place in the broader social media ecosystem, by running counter to other apps.

It’s also an interesting use of Snap’s Map Layers, which it first launched in November, and could facilitate a range of sponsored use cases like this, helping Snap users to connect with local events, businesses, opportunities and more.

It’ll be interesting, also, to see what other features Snap can build into its Map layers, and how that could benefit Snap’s audience in new ways. Maybe that could become a big commercial and advertising opportunity, which could open up new avenues for brand connection, while it could also providing Snap with more data for its AR heads-up display in a future version of its Spectacles glasses.

Imagine looking at a movie theater, then scrolling through movies and session times, overlaid on your view.

That’s the next level, and the more Snap can build geo-based markers and indicators like this, the more that will benefit its next stage of development.

The new Ticketmaster Snap Map Layer is now available ‘in more than 20 countries around the globe’.