Snapchat Is Adding a New Custom Lenses Option for Events

Ever wanted to create your own Snapchat Lens which would enable friends to add personalized visual effects to their Snaps? Now you can - sort of.

Expanding on their on-demand Geofilter tool, which Snapchat launched back in 2016, Snapchat’s now adding Lens templates which you can customize then make available within a defined geographic area, perfect for events and celebrations. 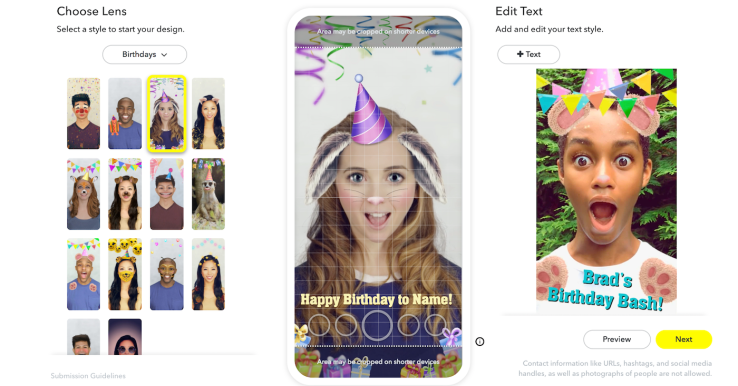 You can’t actually make your own Lens, but as you can see from the above image sequence, there are a range of pre-made Lens options which you can customize with your own additions and messaging. There are more than 150 pre-made templates to choose from, and you can then set a geographic area of availability, and time limit, the combination of which will define the price of your selection.

Snap says custom Lens costs start from around $9.95, but obviously escalate depending on how wide you want the geo-frame to be (the same as on-demand Geofilters).

If you do want to go the extra mile and actually create your own Lens, that’s possible through Snap’s ‘Lens Studio’, which they released last year, but the aim of this addition is less focused on tech-savvy creators and more on providing an immediate, easy way for users to boost event-related engagement in-app.

Lenses are one of Snap’s more popular additions. In their official IPO documentation released last year, Snap noted that one in three of the app’s daily active users ‘plays with Lenses every day’, which would currently equate to some 62 million users (TechCrunch notes that 70 million people use Lenses for an average of 3 minutes per day).

Lenses have proven so popular that Facebook has made providing alternatives a key focus, both within Instagram Stories and Facebook itself. But even with Facebook’s duplicates, Snap’s Lenses remain popular, and the addition of a tool which enables users to create their own will no doubt prove a winner with the app’s user base.

And that user base, of course, is mostly younger people, which is what concerns Facebook the most. If, by providing more tools which appeal to this user base, Snap can make their app more sticky and build upon habitual use among that audience set, that could become a bigger problem for Facebook down the road, particularly if Snapchat's able to evolve their offering to align with evolving user interests.

That’s part of the reason why Snap’s adding in new features like live highlights from the Winter Olympics, why they’re keen to add in more TV-like programming, which they trialled with CNN. It’d obviously take a lot of work for Snap to become a genuine rival for Facebook, or even Instagram at this stage, but they don’t necessarily have to be in order to return a profit. Snap just needs to continue to expand upon its existing niche audience appeal.

From a marketing perspective, the option to create custom branded Lenses will also no doubt hold appeal to specific brands. Imagine being able to build a Lens dedicated to your latest sales event or promotional function – there’s a range of ways in which you could utilize the tool to help build awareness, particularly if you were looking to make Snapchat more of a focus for your content.

It’s very early days, but with uncertainty at Facebook, there may be increased opportunity for Snap to regain momentum in 2018. It’ll be interesting to see how Facebook responds.