Amid rising revenue pressures, which forced the app to company a profit warning last month, Snapchat is exploring a new potential monetization pathway, via a new subscription service called ‘Snapchat+’ which would give users access to new a range of exclusive and experimental app features and tools.

As you can see in this example, shared by app researcher Alessandro Paluzzi, Snapchat+ would come with variable payment tiers, with a free, one-week trial option as well, enabling you to test out what’s on offer via the service.

At present, in this early iteration, that offering includes: 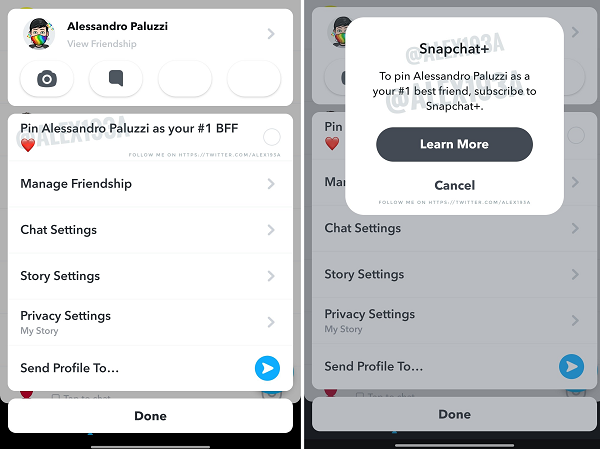 None of those are exactly mind-blowing additions – but again, this is early days, and it could change a lot between now and an official release, if it actually gets to that stage.

We asked Snapchat about Snapchat+ and it provided this statement:

“We’re doing early internal testing of Snapchat+, a new subscription service for Snapchatters. We’re excited about the potential to share exclusive, experimental, and pre-release features with our subscribers, and learn more about how we can best serve our community.”

Essentially, it’s like Twitter Blue, but for Snapchat instead – but if current Twitter Blue take-up is anything to go by, it’s not likely to be a massive hit, at least among the majority of users.

In its most recent performance update, Twitter reported that its revenue from subscriptions and other non-advertising sources totaled $94 million in Q4 21, which is actually a decrease of 31% year-over-year. That suggests Twitter Blue isn’t gaining any traction as yet, while Twitter CEO Parag Agrawal has also said that Twitter has not hit ‘intermediate milestones that enable confidence’ with its new revenue and growth projects.

Would Snapchat+ fare any better?

I guess, part of the reason that Snap might feel more confident is that Snapchat is a more personally-aligned app, with users having a strong affiliation with the platform for their private messaging and interaction purposes. Take, for example, the popularity of Snap streaks, which see users working to keep their daily interactions alive, sometimes at all costs, which shows that Snap users have an arguably more compelling connection with Snapchat as their app of choice.

Maybe that will see more users willing to sign up, while the extra data could also be a lure for those looking to maintain more insight on their connections.

That could actually be a strong selling point, more so than what Twitter Blue has on offer – though again, it’s early days, likely too early to say what the actual offering will be in the end.

But Snap has to try new things.

As noted, last month, Snapchat issued a guidance note to the SEC which advised that its overall revenue would miss the targets that it communicated in its Q1 earnings update, which it reported just a month earlier.

“Since we issued guidance on April 21, 2022, the macroeconomic environment has deteriorated further and faster than anticipated. As a result, we believe it is likely that we will report revenue and adjusted EBITDA below the low end of our Q2 2022 guidance range.”

Could a subscription offering help to prop up Snap’s revenue, and keep it on track with its other projects – like AR Spectacles?

There does seem to be some value for Snap users there, maybe more than Twitter has seen. We’ll keep you updated on any progress.