Snapchat is reportedly developing a new, fully AR-enabled version of its Spectacles smart glasses, which would be a major advance for the product, and for Snapchat's broader plans with augmented reality.

As reported by The Information, Snap's currently developing a more advanced version of Spectacles, which will include in-lens AR displays.

"Unlike past models of Snap’s smart glasses though, this version of the product is not meant for the consumer market but is instead aimed at developers and creators. Those groups are already the creative force behind many of the wildly popular AR effects on the Snapchat app for mobile phones, known as lenses. Snap likely hopes the developers will come up with software experiences that can work on the new device, which could be offered to a wider group of customers at some point in the future."

So, rather than take on the full development load of AR-enabled glasses and their various offerings alone, Snap is seemingly looking to expand its pool of development resources externally, which could help it take that next step.

Given its past development of AR tools and camera-enabled glasses, this likely comes as little surprise. But still, Snapchat has experienced various delays in the evolution of AR-enabled glasses, and we hadn't heard official confirmation of future developments of the product till now.

Technically, this isn't official confirmation either, with the report coming via inside sources. But the information is the most reliable we have to date on Snapchat's AR plans, which aligns with the broader industry development of new, advanced AR tools.

Both Facebook and Apple have made their intentions clear on AR, with both looking to launch AR-enabled glasses sometime in the next few years. Facebook has said that its first iteration of smart glasses will be available to the public in 2021, though they won't be fully AR-enabled as yet, starting with camera-equipped smart glasses and building from there.

Which is what Snapchat has already done - but the cost of development of a full AR device has seemingly proven problematic, with Snap's Spectacles project slowing significantly since the launch of the product back in 2016.

But Snapchat has continued to evolve Spectacles, with a view to the next stage. Snapchat's 'Spectacles 3', for example, added new camera capacity, and 3D capture tools, providing more capacity for the device.

But all along, it has seemed like AR is the end goal here.

In fact, Snapchat has filed various patents around such, and has clearly gone some way towards building a fully AR-enabled device. 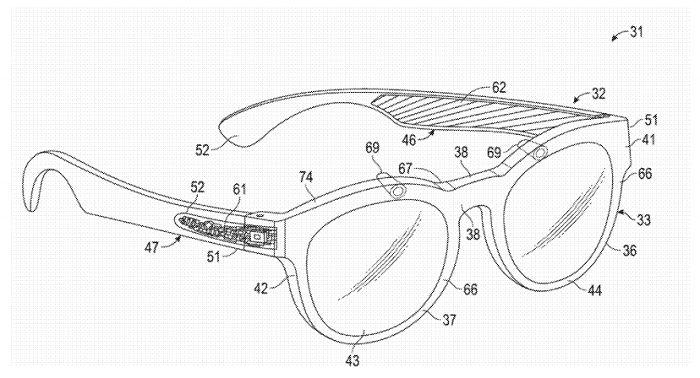 With AR set to evolve to the next phase, Snapchat needs to stay in touch with that shift, and Spectacles provide the perfect vehicle for such.

Whether it can beat Facebook and Apple to market is likely less of a concern in this respect, but with an established hardware delivery process, and experience in the DTC market for such, Snap could still win out as AR glasses become the norm moving forward.