Snapchat's working on some new tools to help facilitate real-life meet-ups, and potentially gamify location tracking at the same time.

As uncovered by social app researcher Jane Manchun Wong, Snap's developing on a new UI for its Snap Map, which would include the ability to check-into locations with a chosen Bitmoji character.

As you can see here, the new Status option will display what you're doing on the map, and will remain active for four hours once set (though you can update it at any time). This'll enable your Snap connections to see what you're up to at any given time - you can choose a Bitmoji character which represents what you're doing (e.g. working, gaming, eating pizza) and you can add in a description of where you are. You can see in the last frame, the character defaults to 'I'm at...' and you can enter the specific location.

The idea of the tool, as noted, is to facilitate meet-ups. If you were looking for company at a cafe, for example, you could include a Bitmoji character with an invitational sign, and if anyone's in the area and looking for something to do, they could come meet you there. That capacity could expand Snap's potential for boosting close connections, which remains a key focus for the app.

In addition to this, Snap's also working on a virtual passport listing which would track all the places you've checked into. 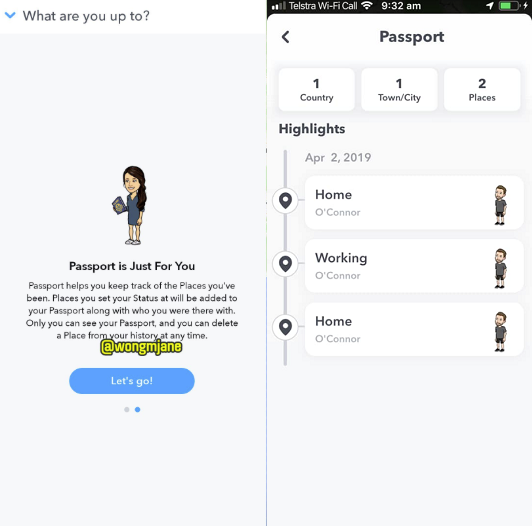 As you can see in the first frame above, the passport system would only be viewable by you, and you would be able to delete any location at any time. Whenever you set a new Status, that would be logged in the Passport, listing all the places you've visited, and who you visited with.

It's difficult to say how beneficial the options will be, if indeed they are rolled out more widely (the tools are currently only available to selected users in Australia). While Snapchat's overall user numbers have stagnated in recent times, in-app engagement has reportedly remained steady, as has the app's popularity with younger users. Given this, Snapchat's key focus is obviously to attract new users, which this could do, if, for example, your friends all started meeting up via Snap Map and you were missing out. But more likely, this will mostly offer an enhancement for existing users of the app - which is not necessarily a bad thing, but it may not be as beneficial for the company overall.

The Passport element could also gamify another aspect of the Snap experience, offering not only reminders of your travels, but also a comparative listing to compete on.

Gamifyication has always been a key part of the Snap process - teens were devastated last year when the Snap redesign wiped out their Snap streaks, a record of sending Snaps to each other, which some users had spent years working on. As such, it makes sense for Snap to utilize that compulsion to drive increased activity in the app - and maybe, by prompting expanded check-ins, and specific notes on what people are doing at each, Snap will be able to obtain additional audience data to help improve its ad targeting.

In addition to this, Snapchat's also taking a leaf out of Instagram's book by developing its own version of @mention stickers. 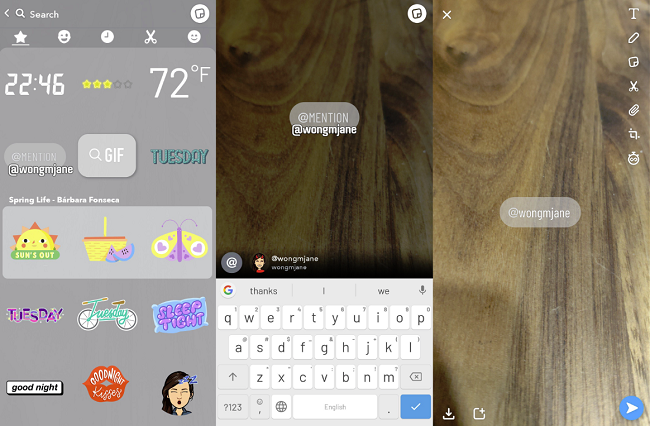 There's no word on if, or when, these features will be rolled out more broadly - we'll keep you updated on any official announcements.