The Birth of the Employee Ambassador Program at Deloitte

Turner Roach, Social Media Marketing Manager at Deloitte, has been leading their employee advocacy program for over a year. He spent the last five years of his career working in social media, and providing training for Deloitte employees to get comfortable using social platforms. In episode 157 of the Social Business Engine podcast, Turner reveals how Deloitte went from zero to more than 7,000 employees participating in their ambassador program. You'll also hear the substantial impact the employees' participation has on website traffic.

Why Employee Advocacy at Deloitte

Turner sees Deloitte's employees as their brand advocates because as a service-based entity they're the faces that people see. He says that their employees are their biggest assets and they wanted to empower them to share their passion for the company through the ambassador program. This required proper training and a tool to make it simple for them to do so.

Employee advocacy programs like Deloitte's help employees to build their personal brand. As part of the education program on social media, Deloitte asks employees what they want to be known for as a subject matter expert. They're noticing that younger employees aren't always sure what they want to focus on yet, because they're early in their career, which is why Deloitte has put this emphasis on personal brand building.

The Journey to 7,000 Employee Advocates

In 2012 Deloitte was selected to be the Official Professional Services Sponsor for the U.S. Olympic Committee for the Summer Olympics in London. The company wanted to tap into employees' social networks and started by providing messaging to thirty pilot participants. Leadership recognized the impact of this small group of people's efforts and encouraged the expansion of this program into a company-wide (in the U.S.) Ambassador Program. 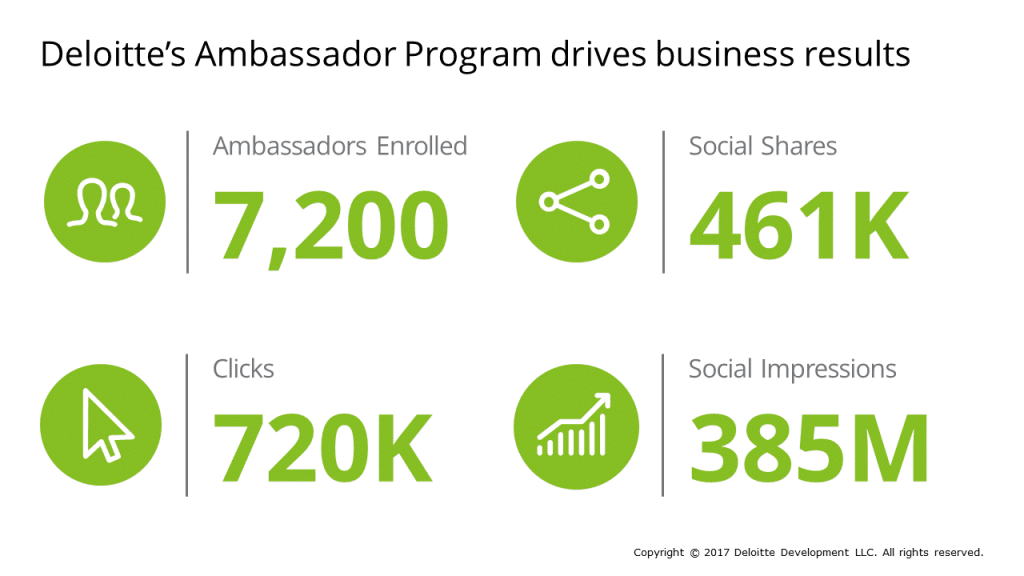 Initially, the program was managed manually on spreadsheets making it difficult to scale. The leadership team asked to accelerate expansion, so a massive communication program was put into play eighteen months ago to encourage more employees to get involved. Deloitte is leveraging all of their communication channels in this effort.

At meetings, leaders across the organization talk about the results they've seen from the program to encourage others to join - they even created a video series to portray the value of the program that has developed into a recruiting tool. Turner says any company scaling an employee advocacy program should let employees tell their story. Word of mouth about the relationships individuals have made through the program inspires others to join.

Lessons Learned in Starting the Employee Advocacy Program at Deloitte

When I asked Turner what they would do differently looking back on the process of rolling out their Ambassador Program, he quickly brought up technology. Starting manually was challenging, and if they had started out sooner with a technology provider, they would be further along in scaling the program. Employee advocacy is a lot easier to roll out and manage more effectively with a tool.

Employee advocacy is a low-cost form of advertising for Deloitte which enables them to talk about their service lines and help to build thought leadership. As we've heard before on the Social Business Engine podcast, many times employee reach is greater than the branded channels - there's a trust between customers and individuals that's not there for the brand accounts. Turner pointed out that content promoted through the Ambassador Program sees upward of 50% of the social media traffic to that page coming from its employee's social media channels. He also tells a story of one employee's post that transformed into an engagement for the firm and generated enough revenue to cover all costs of the program to date. How's that for a success story?