So what did we learn from the big tech CEOs' appearance before the  House Energy and Commerce Committee this week?

Not a lot. As with most of the other, similar hearings we've seen, where Government officials get a chance to publicly question the leaders of the major tech platforms, most of the queries devolved into over-simplifications of process, which served no real purpose and seemed to get us no closer to advancing the key focus on improving how social platforms, in particular, address the spread of misinformation and the facilitation of hate speech.

Indeed, as several others have noted, it seemed more like the Senators were intent on catching Zuckerberg, Dorsey and Pichai out, pushing them to accept responsibility for various events with simple 'yes' or 'no' responses to their questions.

.@USRepMikeDoyle asks Mark Zuckerberg, Sundar Pichai, and Jack Dorsey if their platforms are responsible for disseminating misinformation that led to the Capitol insurrection. "Yes or no?"

Dorsey is the only tech CEO to say “yes.” https://t.co/GiodFMVqVI pic.twitter.com/mqTRnHT5HQ

Which makes some sense. As Rep. Doyle notes in this clip, each representative only has an allotted time to question each person, and that pressure, you could see, forced some to try and get what they saw as 'straight answers' in order to appease their concerns.

The problem is, as each of the men noted, the answers are generally not so simple, and they can't be narrowed down into binary response. Well, that and there's no way that they'd want to accept any legal liability for such, if they can feasably avoid it.

Of course, Facebook and Twitter did play a role in facilitating various movements and trends that lead to the Capitol riot.

For years, Facebook hosted thousands of QAnon groups and Pages, with millions of members, before it eventually moved to boot them from the platform completely back in October, while Facebook was also where hundreds of 'Stop the Steal' groups initially gained traction, which eventually lead to the protests at the Capitol in January.

Indeed, there's clear evidence that activists used the reach of both platforms to promote the protest action. 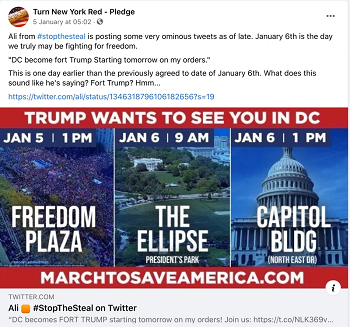 The problem is that, if Zuckerberg says 'yes, we bear responsibility', that could lead to legal action from those impacted, so of course, Zuck and Co. will move to explain the situation, rather than get caught out. The frustration is that everybody knows this - all of the representatives knew that these were the types of responses they'd get, and none of those answers move us closer to addressing the key issues, and moving forward with a more evolutionary policy on such.

This exchange from Rep. Doyle gets closer to the heart of the issue:

Doyle: “How is it possible for you not to at least admit that Facebook played a leading role in facilitating the recruitment, planning and execution of the attack on the Capitol?”

Zuckerberg: “I think that the responsibility here lies with the people who took the actions to break the law and do the insurrection”

Doyle: “But your platforms supercharged that”

Basically, we already know this - Doyle isn't addressing that last comment as a question, he's stating it, because we all know that this is true. The challenge now is progressing, from a policy standpoint, and setting out clearer rules for how we combat such moving forward. That may require increased regulation, which is what this session was seemingly intended to address.

But we didn't get that, and that is a missed opportunity, which will further delay such development.

In essence, this is what Zuckerberg, Pichai and Dorsey were getting at. Each had laid out their proposals for a way forward in their pre-published statements, and that's what should have been addressed. We know what happened in January, and what's taken place over the last four years, but rather than pointing fingers, now is the time to work on how we change things, and it should have been an opportunity to discuss the various proposed approaches and assess their potential merits.

It seems, in many cases, such trials become opportunities for political point-scoring, rather than problem-solving, which is disappointing, as now is the time, in the wake of such incidents, to use the momentum of recency to set down clearer goals and strategies.

Each platform is still taking its own approach, and each has its own ideas. The role of Government in this instance is to bring those ideas to the table, and form a framework that will apply to all, working under the same process to tackle the concerns.

We're not there yet, and going on these hearings, we're still a way off.

Indeed, it seems the biggest news to come out of the hearing was that Jack Dorsey ran a Twitter poll during the session, which highlighted his frustrations.

Really, the focus should be less about pinning the leaders down, and catching them out, and more about assessing a way forward. And the opportunity to do that is right now.