Ticketed Spaces Are Coming to Twitter, Providing Another Way for Creators to Monetize

Twitter continues to ramp up its creator monetization focus with the addition of a new option that will enable users to create ticketed Spaces events, providing another means to generate revenue from your on-platform efforts. 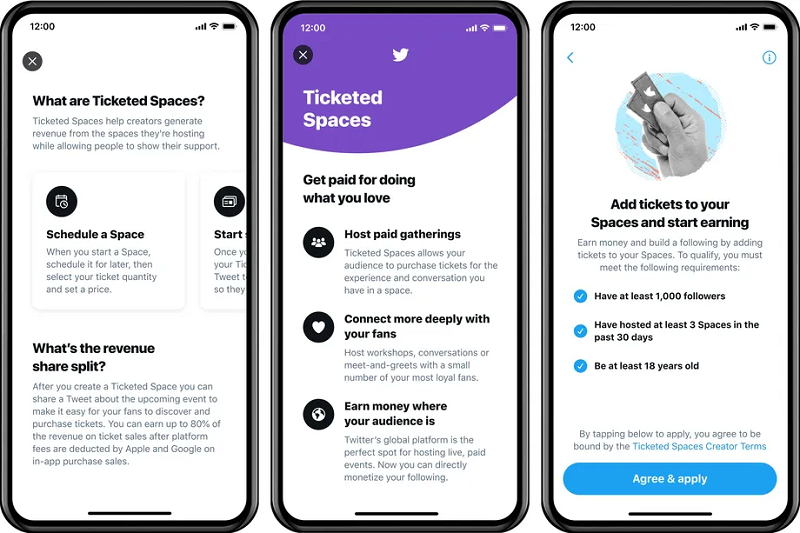 As you can see here, the new process will be available via an application process, which will include signing up to Twitter's rules around paid events.

"US users will be able to apply to host paid live audio rooms starting in the next couple weeks. Anyone who wants to charge has to have 1,000 followers, have hosted three spaces in the past 30 days, and be at least 18 years old."

Once approved, users will be able to set up a ticketed Space by going through the Spaces process as normal, then scheduling the event for a future time. The creator will then be able to select a ticket quantity for the Space and set a price. Creators will take home 80% of any earnings from ticket sales, after app store fees.

Which is something of a sticking point - as noted by tech analyst Ben Thompson, the process essentially means that Apple and Google, which run the respective app stores and operating systems, take home a significant portion of any revenue generated from these events, despite not effectively playing any role in facilitating such directly.

But the implications of such taxes are a broader debate - which are currently being tested by Epic Games in its court case against Apple. For everyday folk, however, this is beyond the scope of a realistic challenge - so the situation being as it is, that does mean that if you set a ticket price of, say, $5, $2.80 from each ticket sold would go to you, 70c would go to Twitter, and $1.50 would go to Apple/Google.

Which does seem like an odd split, but still, it provides another means of direct monetization.

Twitter's partnering with Stripe to facilitate its payments process, which will mean that users will have to set-up a Stripe account, at least in the initial stages. Eventually, as the option is rolled out to more regions, more payment providers will be brought on board, which will provide increased flexibility on this element.

As noted, this is the latest in Twitter's push to provide more financial incentive to keep creators posting, and keep them and their fans engaged within the app.

Over the past few months, Twitter has also announced:

This is in addition to its own subscription service which looks set to enable users to pay for additional Twitter features and tools for a set, monthly price.

And once transactions are happening via tweets, the platform will also look to integrate eCommerce options, which could provide even more monetization potential through influencer marketing collaborations and the like.

With TikTok becoming a bigger player in the social media market, and Facebook looking to ramp up its monetization offerings to both keep its top stars in its apps, and lure more creators across, that's then caused a flow-on effect for all platforms in ramping up their monetization efforts - because without those top stars creating content regularly, you can lose audience share very quickly, especially as more lucrative, high-profile opportunities become more readily available.

Twitter needs to play a part in this, and ideally, through the addition of such options, that will help Twitter establish a better creator ecosystem in order to keep the tweets flowing, and boost user engagement.

In this specific instance, that also means beating out Clubhouse, which is already seeing a slowdown user growth as Twitter continues to evolve its Spaces audio social offering.

That provides a great opportunity for Twitter to become the audio social platform of choice, especially for broader scale public broadcast, which could eventually play a big role in the app's resurgence, with Twitter setting some ambitious goals for growth over the next two years.

And for creators, it's another opportunity to consider. Maybe being a full-time social media personality isn't as out of reach as it once seemed.

Twitter's ticketed Spaces will be rolling out in the US 'in the next couple of weeks' with other regions to follow.