TikTok Launches 'Elections Guide' in the US to Provide Users with Accurate, Timely Voting Information

With the US Presidential Election now only 34 days away, TikTok has this week announced its new 'Elections Guide', which will help connect its users with authoritative voting information, and limit the spread of misleading reports and updates via the app. 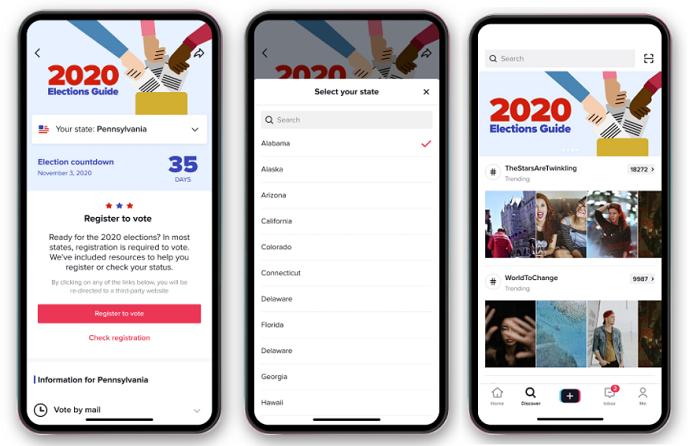 As you can see in these screenshots, TikTok's Elections Guide will prompt eligible US users to register for the poll, while also providing official information on the voting process in each state via the National Association of Secretaries of State, BallotReady, SignVote, and more.

"As with our COVID-19 resource hub, the election guide can be accessed from our Discover page and on election-related search results. We'll also be linking to the guide at the bottom of videos relating to the elections and on videos from verified political accounts."

So it's pretty similar to the approach that both Facebook and Twitter are taking with their election awareness pushes - though you would expect that TikTok will have less of an impact in this regard, given that more than a third of its daily users in the US are aged 14 years old or younger.

But still, it could have an impact. Snapchat, for example, which also caters to a younger audience subset, recently reported that it's already prompted 400,000 people to register to vote in 2020 via its in-app pushes. TikTok's audience skews even younger than Snap's, but any further pushes in this respect can have benefits, and can help drive awareness of civic participation.

And as we've seen, TikTok, despite its own efforts, has already been caught up in political controversy. Negotiations over the app's sale to a US company are ongoing, and it may still face a full ban in the US if it can't arrange a separation from its Chinese parent company. The rising tensions between China and the US have put the app in the middle of global trade discussions - so despite TikTok not accepting political ads and not being focused on news content, as such, it's still involved in political messaging, in one way or another.

Given this, it makes sense for TikTok to align with the other social platforms and offer informational pushes. And even if they don't end up having a major impact, it's still worth TikTok, from a PR perspective, working to distribute accurate, timely, and helpful election information.