Zuckerberg has also noted that, soon, Facebook users will be able to opt-out of political ads. But more on that in a moment.

In an opinion piece for USA Today, Zuckerberg says that despite criticisms, Facebook can and will play a key role in the upcoming US Presidential Election. He hopes that it will be a helpful one:

"With so much of our discourse taking place online, I believe platforms like Facebook can play a positive role in this election by helping Americans use their voice where it matters most - by voting. We're announcing the largest voting information campaign in American history. Our goal is to help 4 million people register to vote."

Voting has long been Zuckerberg's fallback stance on political content. People should be able to see what elected officials have to say, Zuckerberg has said, because they voted them in. If you don't like what they say, don't ask Facebook to stop them from saying it, just don't vote for them again. And while the issue is often more complex than that, there is also some logic in Zuckerberg's stance - so long as voters are not significantly influenced by lies spread by political leaders.

In order to do encourage more voter participation, Zuckerberg has announced a new Voting Information Center, which will be added to both Facebook and Instagram. 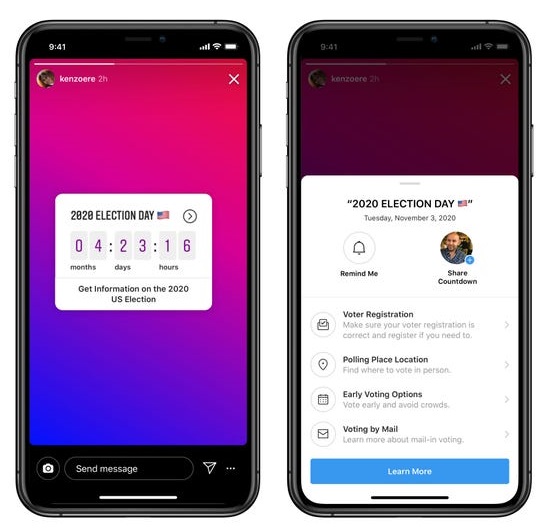 "We're creating a new Voting Information Center with authoritative information, including how and when to vote, as well as details about voter registration, voting by mail and information about early voting. We'll also include posts from state election officials and verified local election authorities. We'll show this center at the top of the Facebook News Feed and on Instagram to make sure everyone gets a chance to see it." 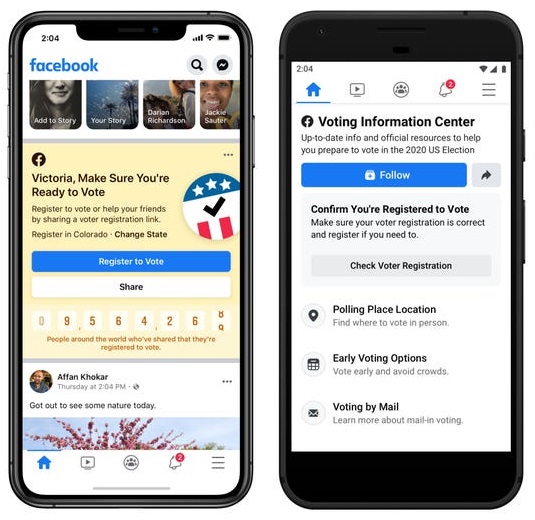 Zuckerberg says that he expects more than 160 million Americans will see "authoritative information on Facebook about how to vote in the general election" from July through to November, heading into the poll. Facebook will also prompt users to register, and add new alerts for information about voting by mail. And Facebook will also run Election Day reminders - which have proven particularly effective in prompting voter participation in the past.

"Ultimately, I believe the best way to hold politicians accountable is through voting, and I believe we should trust voters to make judgments for themselves. That's why I think we should maintain as open a platform as possible, accompanied by ambitious efforts to boost voter participation."

But the key note of Zuckerberg's opinion post came right at the end:

"By giving people a voice, registering and turning out voters, and preventing interference, I believe Facebook is supporting and strengthening our democracy in 2020 and beyond. And for those of you who've already made up your minds and just want the election to be over, we hear you - so we're also introducing the ability to turn off seeing political ads."

The capacity to switch off political ads entirely is a big step. Back in January, Facebook gave users more options to limit how they could be targeted by political advertisers by opting-out of Custom Audience targeting - or conversely, by making themselves eligible to see ads if an advertiser had used a list to exclude them.

"Users will be able to turn off political, electoral and social issue ads from political candidates, Super PACs and “other organizations that have the ‘Paid for by’ political disclaimer on them,”. [Facebook] will start rolling this feature out to some users on Wednesday, and it will become available to all U.S. users over the next few weeks."

Basically, when you see a political ad in your feed, you'll soon have an option within the ad drop-down to turn off all future political ads. You'll also be able to switch them off within your Facebook and Instagram settings.

I would note that the message does say 'see fewer', not 'turn off political ads', but as you can see here, Facebook says that this will effectively turn off all ads with the 'Paid for by' political/issue disclaimer.

Facebook is initially launching the option in the US, but plans to bring it to more regions in future.

That could have a major impact. Of course, it's still reliant on user response, people still need to manually switch political ads off. And while those that have been critical of Facebook's political content stance likely will, it's the people who are not as disparaging of the same that are arguably more likely to be influenced by such.

But it's a start, it's an option - it's a significant step for Facebook, which provides some measure to reduce the influence of political campaigns. The impact will be variable, but it'll be interesting to see how people respond to the option.