While US regulators weigh a potential ban of the app due to its ties with the Chinese Government, TikTok has today launched a new video series, in partnership with a group of platform influencers, which aims to help raise awareness of misinformation, scams and general inauthentic behavior online.

Learn to distinguish reputable sources from questionable ones ##tiktoktips

"The "Be Informed" series addresses an important building block for an informed online experience: media literacy. Being media literate means having the ability to access, analyze, evaluate, create, and act using all forms of communication."

As you can see in the above example, featuring Gabe Erwin, the videos look to help users understand what to look out for online, and include platform-specific notes on how to report issues.

The videos are created in TikTok's creative style, which should help them see more reach, while using popular creators will also help to amplify the key messages.

TikTok worked with various experts in creating the clips, including the National Association for Media Literacy Education (NAMLE).

"NAMLE is a network of educators, scholars, researchers, practitioners, media makers, and thought leaders in the field of media literacy. Like NAMLE, we believe that media literacy is crucial to enhancing the online experience for everyone."

It's a good initiative, and a particularly important one for the platform's younger user base. In fact, given the increasing reliance on digital connection during the COVID-19 lockdowns, such education is more important than ever, and an argument can (and should) be made that digital literacy should now be on the national education curriculum in all regions.

Finland is actually leading the way on this, in 2014, the Finnish Government implemented a new education program - beginning from elementary school - which focuses on digital misinformation, and encourages critical thinking.

That effort has had an impact - in a 2018 study, Finland ranked first in resilience to digital misinformation and manipulation. 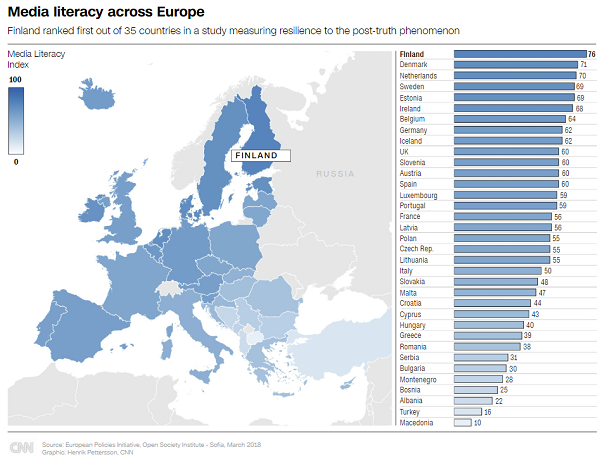 But then, of course, there are other concerns around TikTok use, particularly in relation to how user data is being potentially accessed, and used for alternate purpose by foreign authorities. We don't know the extent of such data-sharing, nor even whether it's even happening - but interestingly, another concern around TikTok use relates specifically to the very focus of this new education initiative.

As recently noted by tech analyst Ben Thompson, while the data access issue is significant, a bigger concern around TikTok use may actually be that the app could be used to spread pro-China propaganda.

As noted by Thompson:

"TikTok’s algorithm, unmoored from the constraints of your social network or professional content creators, is free to promote whatever videos it likes, without anyone knowing the difference. TikTok could promote a particular candidate or a particular issue in a particular geography, without anyone - except perhaps the candidate, now indebted to a Chinese company - knowing."

That type of manipulation is the focus of this new education push, though more complex initiatives in this area, as Thompson notes, would be impossible to detect.

TikTok has already been heavily scrutinized over the belief that it has censored certain topics, like discussion of Uighur Muslims in China, and the recent Hong Kong protests. We don't know, exactly, whether those topics have been censored - and that, says Thompson, is a big concern, given the Chinese regime's history of censorship and its links to the app's ownership.

Such potential needs to be taken seriously, particularly given China's renewed action to expand its borders, and the ongoing tensions with the US.

Will that lead to a ban of the app in western nations? It seems possible, though it also seems like it will take another significant event to trigger such a response, marking the full degradation of international relations with the nation.

That doesn't lessen the potential benefits of this new education program, of course, but it is relevant in the wider scope of the app, and the surrounding discussion. Definitely, these tips are valuable - but it's also worth parents noting the ongoing concerns around TikTok use, and how that also relates to digital manipulation efforts.