Could TikTok really be the next big social platform to emerge?

It's obviously impossible to answer, but the numbers have shown that TikTok is growing, and the latest app download data from Sensor Tower - looking at download numbers for July 2019 - show that TikTok remains popular. 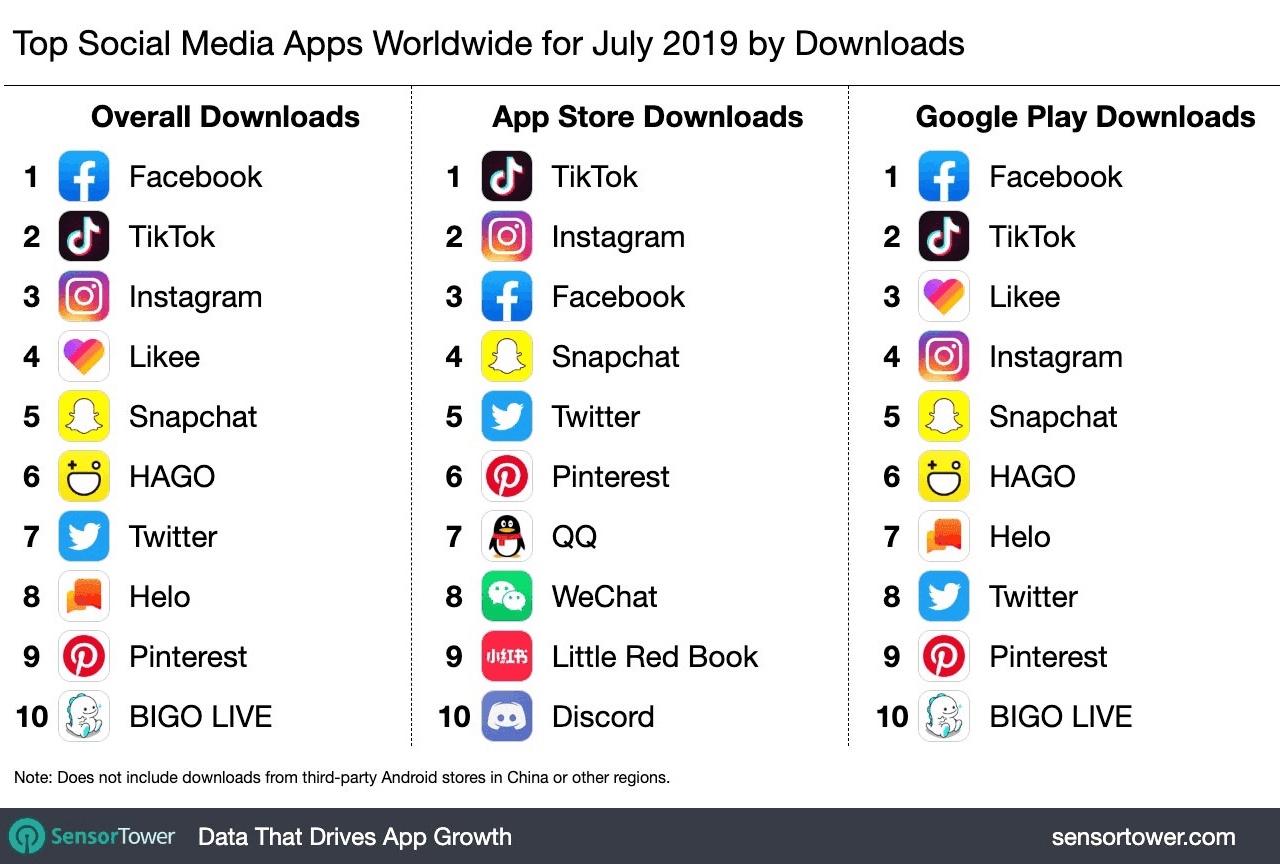 As you can see, TikTok is running in second place to Facebook overall, with Instagram and Snapchat also near the top of the charts. Likee, a video editing app, has also been popular throughout the year, as has gaming app Hago, while Helo is a rising social app in India.

But from a broader social networking perspective, its the big players that remain the focus - and in that, is TikTok now moving into that top player's bracket?

There are a couple of big questions to ask of the app before we know that answer - for one, despite the ongoing hype around the app, TikTok itself hasn't released any official user counts for some time.

Back in November, Sensor Tower reported that TikTok had seen 80 million downloads in the US, but downloads, of course, are not active users. Earlier this year, reports suggested that TikTok had around 26 million monthly active US users, who were spending, on average, 46 minutes per day in the app - but without definitive comparison, it's difficult to know where the app really stands.

On the TikTok advertising site, the platform notes that TikTok has been "ranked top in over 40 countries' app stores", and that more than 90% of its users open the app multiple times a day. But again, these aren't reach figures, which may somewhat cloud its actual performance.

Adding to this, The Verge's Casey Newton reported earlier this month that, despite the hype, TikTok users actually aren't sticking:

"Much of TikTok’s growth has been bought and paid for by ByteDance investors. The company spent nearly $1 billion on advertising the app in 2018, the Wall Street Journal reported in June. And platform executives familiar with ByteDance’s spending have told me that a significant majority of new users still abandon the app within 30 days."

That's obviously a significant issue, and with the company not producing official numbers, it would appear to add weight to those concerns. TikTok will report official numbers at some stage, but till it does, such questions will remain.

The other major issue with TikTok is its ownership, and how the app is used within its home nation of China.

The Chinese version of TikTok - called Douyin - has around 500 million users, and has repeatedly come under scrutiny from the Chinese Government over content violations and illegal messaging. In fact, Douyin is viewed by many to be a propaganda outlet for the Chinese government. In this sense, it's not the fact that Douyin and TikTok are owned by a Chinese company itself that's the major concern (as was a highly cited issue with the recent rise of FaceApp and its Russian roots), but the fact that there is precedent for how the app can be used, or influenced, by the Chinese government.

If China decided to use TikTok as a tool to spy on western app users, that would be an issue, and one that, given the app's history, is not beyond the realm of possibility.

So while TikTok continues to perform well in total downloads, there are some big questions about its long-term viability, and how it will continue to operate, and grow, moving forward.

The numbers look good now, and it's hard to ignore its position in the app charts. But whether it holds on or fades, like other fad apps before it, remains to be seen.