With negotiations over the future of the app ongoing, and Microsoft still seemingly the lead bidder for the platform, TikTok has this week revealed its actual user counts for the first time, which detail TikTok-specific user numbers, not incorporating usage of the Chinese version of the app, called 'Douyin'.

Much has been made of TikTok's meteoric growth, with the app reaching 2 billion total downloads worldwide back in April this year. That's lead to some confusion over the app's actual usage, with some conflating download numbers with user counts, and comparing TikTok to Instagram and Facebook in terms of usage numbers.

The latest data shows exactly how they compare on this front. As reported by CNBC, as part of TikTok's legal filing against the US Government's proposed ban on the app, TikTok has reported that it, officially, has:

The data also shows that TikTok had some 689 million global monthly active users as of July 2020, a massive jump from the 54 million it had in January 2018. It's not clear if this figure includes Indian users, where the platform reportedly had 200 million actives before being banned at the end of June.

The data provides some helpful perspective on exactly where TikTok stands in terms of US usage, which, as noted, has been clouded by reportage of the app's total downloads, skewing perception of its actual reach. Indeed, Facebook, which now has 2.7 billion monthly active users, has been downloaded almost 5 billion times over the past decade, so you can see how the two data points don't necessarily correlate.

That's important to note for marketers considering using the app. TikTok is definitely seeing massive growth, and has huge potential in this respect. And on a comparative scale right now, it's somewhat in line with the other platforms in the market. 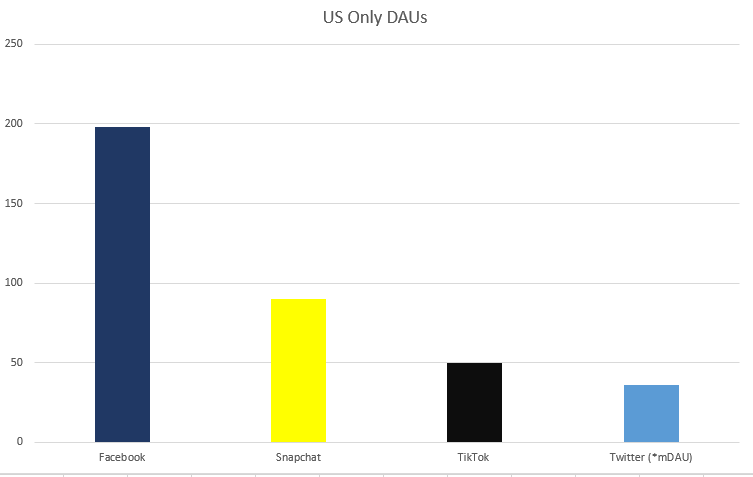 But it's not overtaking them yet - but even so, the platform's growth is significant, and it's valuable insight to have in understanding exactly where it's placed, and what the impact of banning the app could be.

That ban is still up in the air. This week, as noted, TikTok has officially launched legal action to stop the US Government from blocking it, while potential suitors for the platform continue to assess their options, and their bids for the $30 billion app.

The Wall Street Journal has today reported that investment firms General Atlantic and Sequoia Capital are key players in a consortium considering a bid for the app, which also includes cloud computing giant Oracle. Microsoft remains the favorite however, and while Twitter has also shown some interest in buying parts of the app, it's reportedly not high in the running at this stage.

Given the growth stats, and potential, you can see why these investors want to get involved, and you would assume that, somehow, TikTok will eventually remain in operation. But the timeline is closing in, and it'll be interesting to see how things ramp up in the next two weeks, and what that eventually means for the app.

If TikTok's legal challenge fails. It could also be that TikTok will use legal challenges to delay any ban on the app till after the US election, which will add another level of complexity to the push.

Either way, our expectation is that TikTok will remain in operation, though there's a lot happening around the app.