While Facebook continues to push its Watch video platform in the hope of taking a bigger share of the digital video pie, gamer-focused platform Twitch is also looking to expand on its content options, as it grows its audience, and broadens its potential.

Over the past year, Twitch has seen a significant rise in its 'Just Chatting' channels, which see popular streamers interacting with fans, without gaming. Just Chatting streams now rival its biggest gaming categories, while Twitch also signed a deal in June to stream Premier League games in the UK, moving from virtual sports into real matches.

And now, Twitch is adding another 'beyond gaming' option, with the full launch of its Watch Parties, which enable users to stream selected movie and TV content that can be viewed with their fans. 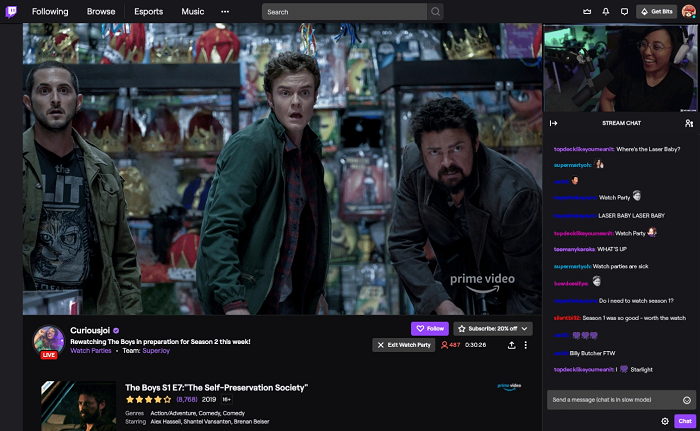 As reported by TechCrunch, Twitch began testing Watch Parties last fall, and is now moving to a global launch for the feature.

"With the global expansion, Twitch streamers can host a Watch Party featuring any title that’s included with a Prime or Prime Video subscription in their region."

As you can see in the example shot above, Watch Parties see the movie or TV show playing in the main window, with the host in a smaller video screen at the top right, above the group chat.

That could prove to be a popular option, especially, as noted, given the rising popularity of 'Just Chatting' streams.

Indeed, Twitch streamers are now becoming major celebrities in their own right, which gives them enough credence to move into new categories and broadcast options, similar to how YouTube streamers who started in gaming (e.g. PewDiePie) have been able to take their audience with them into new formats.

That presents a significant opportunity for Twitch - and it's likely coming at just the right time, with the global lockdowns pushing more people to find new ways to connect and engage. Twitch has also seen a big rise in virtual DJ sets hosted on its platform, while overall viewership, as displayed in this chart from Statista, has seen a massive rise since the start of 2020. 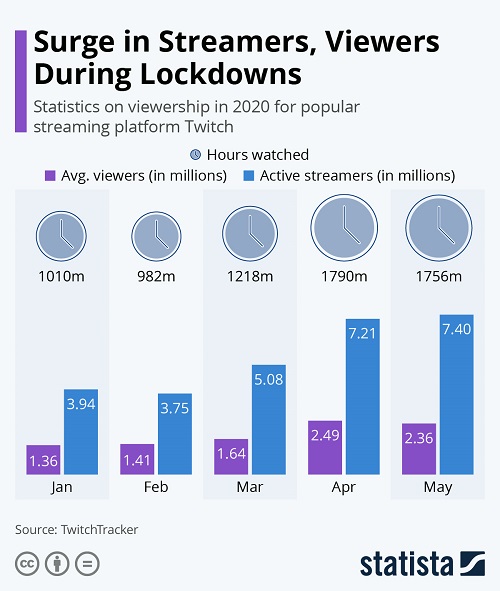 "The number of total hours streamed on the platform nearly doubled from February to May. With roughly 980 million hours watched in February, May obliterated that mark with over 1.7 billion hours."

That's still a long way off YouTube, of course, which sees around a billion hours watched every day. But Twitch's total monthly viewer count, at 2.36 million in May, is significant.

That, again, underlines the significance of Twitch's opportunity, and as the platform expands, so too do the opportunities for advertisers to reach audiences via Twitch.

The gaming community is hugely influential, and Twitch hosts many of the sector's brightest stars. And now, with more options to enable them to branch out into more areas, and grow their presence, Twitch may be becoming a bigger consideration, in all respects.

If you've never looked into it, it may be worth taking the time to have a look through Twitch at some stage, and get a feel for what's being shared on the platform. It could be another consideration for your future campaigns.