Twitter's trending topics lists can be problematic for various reasons. Sometimes Twitter's algorithm will highlight offensive terms, sometimes the trends amplify divisive issues, and sometimes - maybe a lot of the time - it's just not very clear exactly why a certain word or phrase is trending at all.

Which makes you tap through, which, of course, boosts Twitter engagement - but that's not always a great user experience. Tapping on a celebrity's name, for example, to find out what may or may not have happened to them is an extra step, when it may not have anything to do with the person at all. You tap through, you see why the trend exists, then you leave. That can be annoying, and now, Twitter's looking to do something about it.

This week, Twitter has launched a new test which will see it display example tweets alongside trending topics in its lists, which will provide more context as to why that topic or term is trending, saving you an extra click. 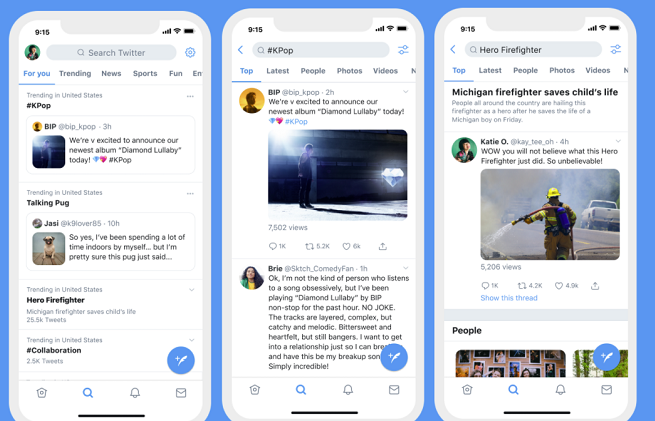 "Trends show what everyone is talking about right now. But too often, we look at one word or phrase trending on Twitter and ask, “why is this trending?”. That question was actually Tweeted over half a million times over the last year! [...] To help with this, we’re adding pinned Tweets and descriptions on trends to help explain why something is trending."

You can see examples of both variations above - in the first screenshot, you can see example tweets attached to two listed trends. In the last screenshot, there's a description at the top of the listing, providing more context on the discussion. Twitter won't display example tweets for every trend - at least not initially - but it will provide extra notes for selected topics.

"A combination of algorithms and our curation team determine if a Tweet represents a trend by evaluating if the Tweet is very reflective of the trend and popular. Our algorithms are designed to identify representative Tweets that aren’t potentially abusive, spam, or posted by accounts trying to take advantage of our system."

It's a small change, but an important one, especially in the broader context of Twitter simplifying the on-platform experience.

Back in 2015, Twitter acknowledged that while it had gained significant traction with "early adopters and tech enthusiasts", it had struggled to connect with the mass market. While most people were aware of Twitter, many still found it difficult to understand, and even more difficult to use. At that time, Twitter's user growth numbers had slowed to a crawl, and it was struggling to find new ways to break through and attract a larger audience.

From then on, Twitter's focus shifted to simplicity, and making its platform easier to understand. That's since lead to a range of new experiments and changes, including its conversational features designed to better link tweet replies into threads, using Twitter Lists as swipeable, alternate feeds and adding topics to follow in addition to profiles. Even this week's addition of listing 'Quote Tweets' on the main tweet display is another way to make it clearer what each element of Twitter is, what it does, and how it's used on the platform.

That ongoing effort seems to have paid off - in the last year, Twitter's monetizable daily active user count has grown 34%, while it's also seen steady, ongoing increases in engagement over time.

It's still a long way off some of the main social media players in terms of active user counts, but Twitter has been able to get back on track after a period of sluggish, even non-existent growth just a few years back.

Adding more context to trends is the latest element on this front.

Initially, the new tweet examples in trends will only be available on mobile, and only in selected regions. Twitter's hoping to bring them to more regions, while also adding more descriptions and examples, over time.

You can read more about Twitter's new examples in trends here.