Twitter has released its latest performance update, showing a significant increase in users in Q2, along with a largely anticipated reduction in ad spend. Twitter's lower revenue results, given the pandemic, are largely in line with expectation, but the growth in users should better place the company moving forward.

Here are the key highlights.

First off, as noted, Twitter's average monetizable daily active user (mDAU) count grew 34% year over year to 186 million in the quarter, with more people turning to the platform to stay up to date with the latest news. 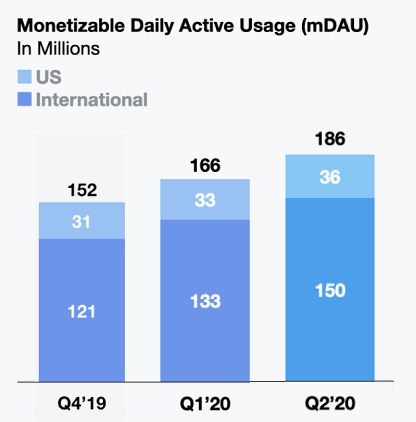 Twitter's real-time stream has proved to be a key connector amid the COVID-19 pandemic, as well as through events like the #BlackLivesMatter protests around the world. As you can see in these charts, Twitter has seen ongoing usage growth in 2020, with its international usage rising significantly - growing by 29 million from Q4 '19 (compared to +5 million in the US).

Twitter, as with most platforms, has seen particularly solid growth in India - with the Indian market becoming more connected, and smartphone ownership rising, social platforms are now seeing rapid adoption, which could present significant opportunities in future. Twitter also remains highly popular in Japan, and continues to expand in south-east Asian regions, which will likely see it well-positioned to capitalize on developing market reach into the future.

But right now at least, that growth isn't being reflected in the company's revenue stats. 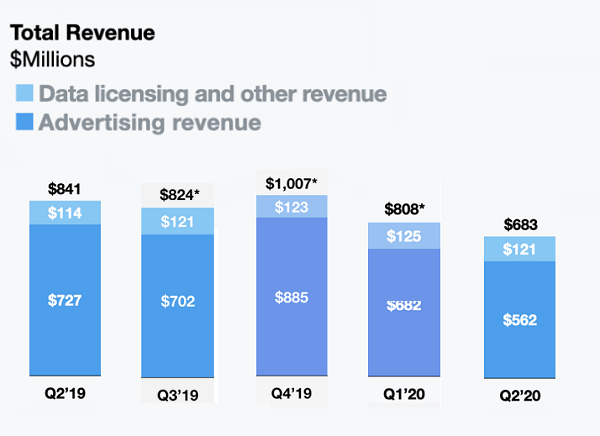 As you can see here, Twitter's overall revenue was down 19% for the quarter to $683 million. Twitter says that it's seen 'moderate recovery' in advertising demand, but the ongoing impacts of COVID-19 have taken many potential advertisers out of the market, and with sports, in particular, on-hold, that's hurt Twitter's overall intake.

Video ads continue to contribute the majority of Twitter's ad revenue, while the platform has also completed the re-build of its problematic Mobile Application Promotion (MAP) system which has caused significant revenue impacts.

The problems with its MAP service reduced Twitter's capacity for ad targeting, which resulted in a significant reduction in ad spend. Now that the system is repaired, that, again, puts Twitter in a better position moving forward, but it still needs to weather the pandemic before it's able to fully capitalize on that potential.

That's really the story of Twitter's latest earnings report - the numbers reflect positive signs, but Twitter's not likely to see the benefits of such for some time yet. Really, that seems to be the story in most sectors and businesses, with most companies just looking to maintain the status quo as best they can till we reach the next stage. Given this, it's difficult to take too much from these numbers, either in a positive or negative light, because while usage is up, that could just as well decline again once people are no longer in lockdown, and while revenue is down, there's no guarantee that advertisers will come flooding back when things re-open.

As such, it's all about estimates and probabilities - adding more users seems like a good sign for Twitter right now, while solidifying its ad systems will better position it to capitalize on such in future. At some stage,

There is also this note in Twitter's report:

"We are in the early stages of exploring additional potential revenue product opportunities to complement our advertising business. These may include subscriptions and other approaches."

Speculation about a possible subscription element for tweets came to light earlier this month after Twitter posted a job ad for a role working on a new 'subscription platform', codenamed 'Gryphon'. Twitter removed references to the project from the job ad, but by then it was too late, with every tech pundit taking a guess at what Twitter might be building.

Now, Twitter CEO Jack Dorsey has further confirmed that they are looking at a subscription model.

As we speculated (along with everybody else), a subscription model for Twitter will likely be similar to Facebook's Fan Subscription tools, which enable prominent creators to offer fan exclusives, like live-streams and announcements, in a separate, monetizable, subscriber stream. That would align with Twitter's move to provide more ways to limit tweet replies, for example, and facilitate more conversational use cases on the platform.

There's not much to go on yet, but Dorsey says they they will likely look to test subscriptions, in some form, in the coming months.

And lastly, Twitter notes that its been upping its efforts to remove COVID-19 misinformation.

"As a part of our health work, we aggressively targeted misinformation and toxic or abusive content relating to COVID-19. During Q2, we shipped over 40 automations and tooling improvements to support COVID-19 content review. Since introducing our COVID-19 coverage, we have removed approximately 15,000 Tweets and challenged 4.5 million accounts."

Indeed, Twitter is clearly upping its efforts to remove misinformation, in various forms. But that also comes at a cost.

"Research and development expenses grew 36% to $216 million, primarily due to higher personnel-related costs as we continue to focus our investments on engineering, product, and design, and higher allocated facilities and supporting overhead expenses."

Again, in the longer term, these initiatives look to provide significant benefit, but right now, we all remain in a sort of limbo, where no one's really sure what's coming next, and if or how the economy will recover. And then, what that will mean for business performance moving forward.

Overall, Twitter looks to be in a good position, with plenty of positive signs and developments. But, as with everything, we'll have to wait and see how it all plays out.