Twitter has added a new informational prompt to searches related to voting in the US, ahead of the coming US Presidential election.

It’s now easier to find trusted information about voting in the US.

Beginning today, when you search for key terms related to voter registration on Twitter, you’ll see a prompt in English or Spanish pointing you to official sources. pic.twitter.com/MMFg6N1BJV

As you can see here, the new prompt, created in partnership with VoteGov, USAGov, and the US Election Assistance Commission, will prompt users to 'Learn the facts' about voting when they search for related terms. That will help ensure that accurate, timely information is made more readily available when needed, which could help to limit the influence of misinformation campaigns.

....living in the state, no matter who they are or how they got there, will get one. That will be followed up with professionals telling all of these people, many of whom have never even thought of voting before, how, and for whom, to vote. This will be a Rigged Election. No way!

(Note: These warning labels have only recently been added to embeds - previously they were only displayed on Twitter itself).

That action prompted Trump to call for an investigation into Twitter's capability to label his tweets, which has since lead to a review of Section 230 of the Communications Decency Act, which provides protections for social platforms in regards to the content that users post to them. That review is still ongoing, but the very act itself has caused significant tension between the platform and its highest-profile user.

Trump apparently has no intention of stopping his use of Twitter, given the reach it affords him, while Twitter has since added more warning labels to tweets from Trump and his team, underlining its rules, even as they relate to comments from the President. Still, Trump has continued to criticize the election process, which is part of the reason why these new labels from Twitter are important in ensuring that accurate, official information is readily available, refuting questionable claims.

The labels are similar to those that Twitter added back in January to help dispell COVID-19 misinformation. 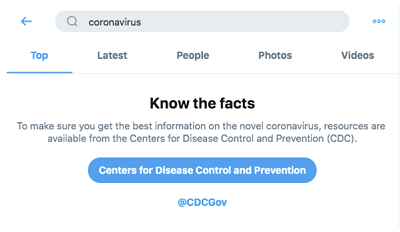 In addition to this, Twitter has also re-added labels to candidate profiles to provide more transparency in tweet discussion, while it's also made it easier for users to report election misinformation via tweets. Twitter also banned all political ads on the platform last year in order to avoid potentially assisting in the spread of misinformation via its tools.

Given the already divisive elements at play in the US election process, Twitter's new information prompts could serve an important purpose in keeping people informed, and getting more people to participate in the November poll. Of course, they still require users to tap through on these prompts to get more information, but previous research has shown that such processes can have a beneficial effect.