As part of its broader efforts to provide increased transparency within political discussion, Twitter has this week announced a new version of its profile labels for election candidates, which will better identify who they are, and where they're standing in the 2020 US election period. 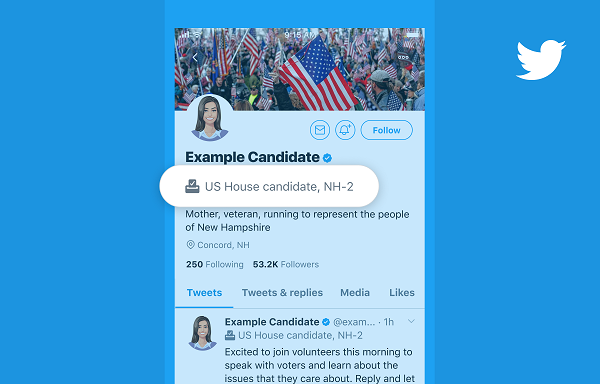 Twitter first launched its candidate labels back in 2018, ahead of the US mid terms, with a more simplified version that highlighted campaign activity.

The new labels will include additional info - as explained by Twitter:

"Starting this week, we’ll start identifying candidates who qualify for the primary ballot for US House, US Senate, and Gubernatorial races with a verified badge. [...] Twitter is partnering with Ballotpedia, a civic nonprofit organization that publishes nonpartisan information on federal, state, and local politics, to help identify the campaign Twitter accounts of candidates once they qualify for the general election ballot for an applicable office."

Twitter says that its candidate labels were well received in 2018, and played a prominent role in election conversation:

"In the week before Election Day, people on Twitter saw Labeled accounts approximately 100 million times each day, and 13% of US election conversation on Twitter included a Tweet with an Election Label."

The new variation will build on that transparency, and with social media's role in the election race set to come under intense scrutiny, it makes sense for Twitter to seek to enhance its political ad tools wherever possible.

The new labels will begin appearing on candidate accounts from this week.