Earlier this week, Twitter's native tweet management app TweetDeck asked users what feature they'd most like to see added to the app.

If we could wave a magic wand, what functionality would you most like to see added to TweetDeck?

TweetDeck has followed that up with the announcement that users will now be able to add GIFs, threads, polls, and emoji, and utilize image tagging, all via TweetDeck. 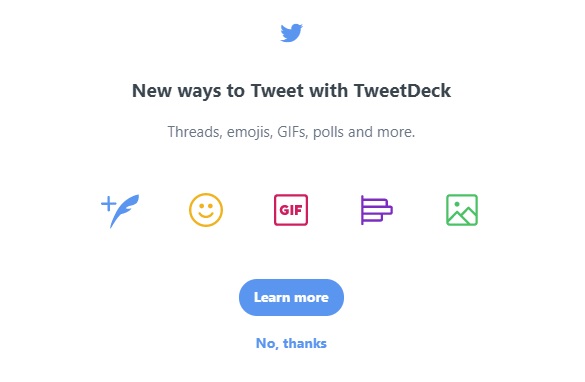 The additions are significant for social media managers who utilize the native tweet management platform - and while TweetDeck still lags behind some other third party platforms with its various tools and options, it's a solid tool for maintaining awareness of tweet trends and mentions, and managing your presence.

Twitter has long been criticized for failing to innovate with TweetDeck since buying up the platform back in 2011. It has improved on this in the last couple of years, adding in new functionality, including video scheduling. But as noted, with so many other third-party tweet management platforms, it's surprising that Twitter has failed to capitalize on its own, dedicated app in this respect.

But it is a functional, helpful tool, with a range of integrated options. If you haven't tried it out, it's worth giving TweetDeck a look, and new additions like this only broaden the app's potential.