In recent months and weeks, we've seen reports springing up that Twitter was making changes to it's long standing rule of 140 characters.

Over the years, Twitter's made various small changes to how the network functioned, like adding a direct-messages button, allowing GIFs, and changing the Twitter "favorite" button to a heart-shaped "like" button. These changes have all been relatively minor, as Twitter's been hesitant to make any major changes for fear of of scaring off their loyal users. Earlier this year, when rumors first started circulating about Twitter considering a change to the 140 character limit, users revolted. Twitter CEO Jack Dorsey quickly took to Twitter and other media outlets to calm any fears that they would greatly alter the way a tweet works.

A few months later, and we see what he meant: the 140-character limit is still there, but they've found a way to increase tweet flexibility within those restrictions.

While strict adherence to the 140 character policy has confused and infuriated users over the years, it's also come to define the social media network in many ways. And much like Instagram going from it's once famous square form to allow for more freedom, Twitter too sees this change as an opportunity to spark interest, and hopefully, user growth.

"This is something that has been requested from people using Twitter for quite some time," Jack Dorsey said in an interview. When people try to cram their thoughts into a 140-character tweet, "then you're just thinking a lot about Twitter instead of what you're saying. We shouldn't make you think about Twitter," Dorsey said.

The first change is that media such as photos, GIFs, and videos will no longer count against the 140-character limit in tweets. This will allow users to use more of the 140 characters for their message without running up against the character restriction.

It's important to note, however, that links will still count towards the character limit. 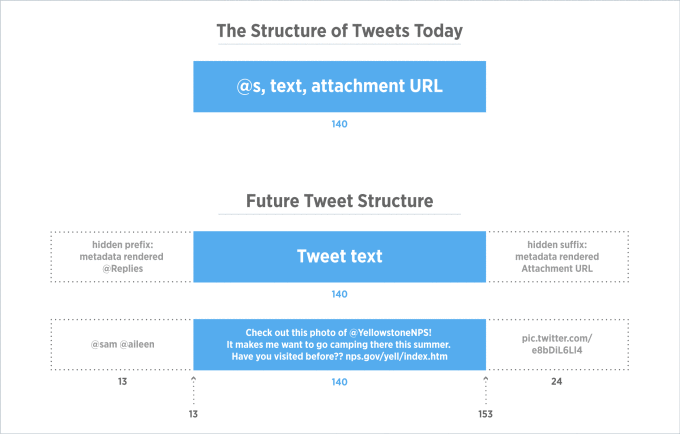 Meanwhile, the change with @replies is designed to make it easier for users to have group conversations on the service.

When many users begin to chime in on a conversation thread, being able to reply to everyone has required that you limit your words. At some point, you simply have to drop people's names (their @username) from your tweet in order to fully express your thoughts. The update will change that, as the tweet no longer includes the leading @mentions - they're displayed differently in the user interface.

This change will also fix another quirk of the @mentions. Currently, Twitter assumes that tweets starting with a @username are replies to that account and are hidden by default in your followers' streams - unless the follower follows both of you. Most seasoned Twitter users have figured out that to get around this, you just place a period in front of the @username to broadcast that tweet to all of your followers. While this workaround has become commonplace to many users, more casual and new users are unaware of this workaround.

This was originally intended as a way to keep timelines clear from one-on-one conversations that could be seen as too much clutter to other users. The problem is that one of Twitter's greatest strengths is that it's a public conversational platform, and having a rule in place to hide conversations was never a good solution. Twitter's update will change this so that all tweets have the potential to be seen by all your followers, even those beginning with an @name.

And one final change involves being able to retweet and quote your own tweets, something that wasn't possible before. Because not everyone sees your initial tweet, many users wanted a way to rebroadcast their same tweet again. While, originally, the restriction on own-retweets was put in place as a way to cut down on spammers, it also limited users who wanted to make sure their good tweets were seen - or, in the case of quoting tweets, wanted to comment on their original post without having to compose a new tweet.

Twitter's on-going battle between playing to it's strengths and being welcoming to new users has played a large part in the stagnant growth of the platform. With these new changes, Twitter's hoping to move away from their complex rules to a more intuitive service.

Twitter didn't give an exact timeframe for when the changes would go live, beyond "the coming months".

As to why they are making the announcement now, they wanted to give developers time to prepare:

"As this change will impact the hundreds of thousands of products built on top of Twitter's platform, Twitter is offering a grace period while developers transition their products. The changes will impact the public REST and Streaming APIs, Ads API, Gnip data products and Display products, like Twitter's Fabric Kit for embedded tweets and timelines displayed on web and mobile, the company noted in a blog post aimed at developers."

"Changing the nature of tweets is risky for Twitter, as these qualities have attracted and retained the most loyal users," said Brian Blau, a technology analyst for Gartner. "But for them to become mass market and move to the next level, they need to make fundamental changes."

As a fan of Twitter, here's hoping these latest changes work out.