As audio social platform Clubhouse continues to gain momentum, Twitter is working to quickly evolve and roll-out its own version of the same, with Twitter Spaces gradually trickling out to more users, and getting new feature upgrades in line with user response.

Over the past week, Twitter has previewed a range of improvements for the Spaces UI, including a new display of all speakers and listeners in a room, and more prominent markers for speakers and hosts within a Space. 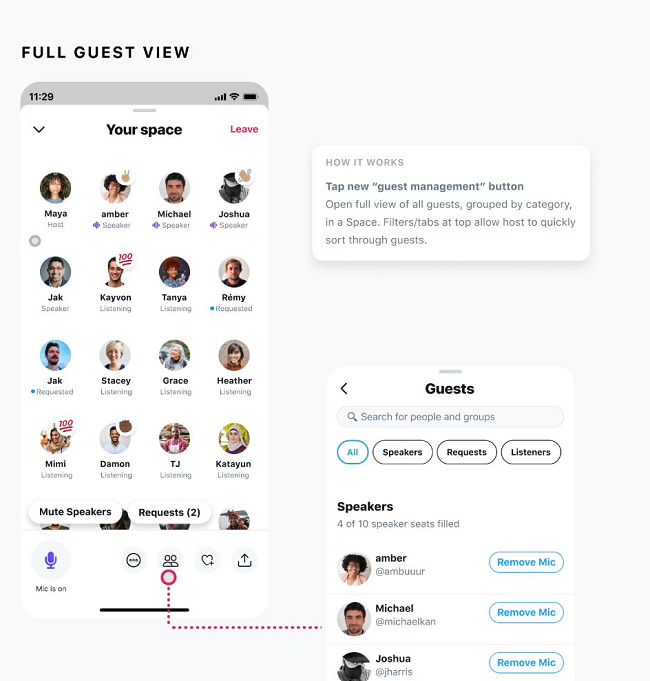 The full guest view is a key update - right now, when you're in a Twitter Space, you can see how many other people are in attendance, but there's no way to view a full list of who, exactly, is tuning in.

As you can see in this image (above), speakers and hosts will soon be able to tap on a 'guest management' button to get a full overview of attendees, separated into tabs for 'Speakers', 'Requests' (those looking to join the discussion), and 'Listeners'. Listeners will also be able to access a similar list, though only separated into 'Speakers' and 'Listeners', and on a single tab.

The 'Requests' tab will make it easier for hosts to manage their Space, and add those who want to take part in the discussion. 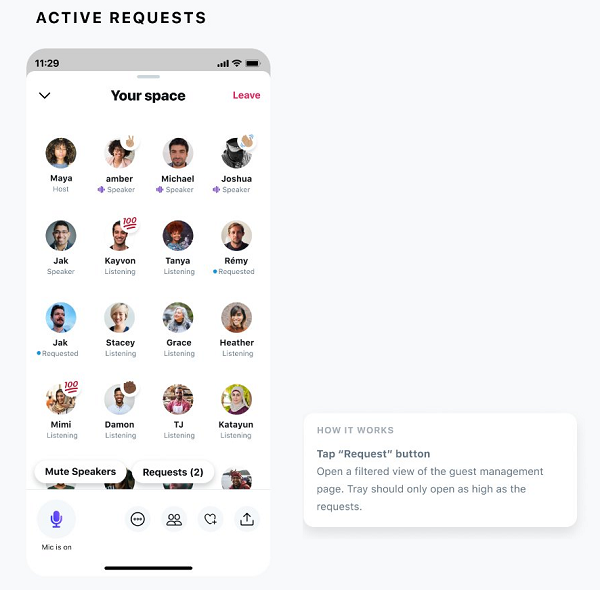 While Twitter's also working on how it orders its display of who's in attendance within a Space, with considerations around changing the listing when new people join, and ordering users based on the size of their following. 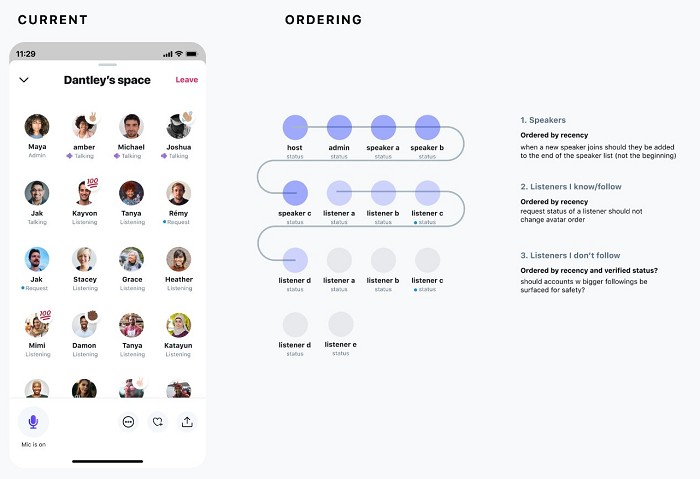 Twitter seemingly hasn't settled on a definitive approach on this front, but the consideration in regards to following size relates to the speakers being aware of those high-profile users when they join, which could impact how they interact.

And as noted, Twitter's also working on how it displays speakers and hosts within a Space - both in the main app and within the Spaces UI. Here (below), you can see a new Stories ring color designating when a user you follow is speaking in or hosting a Space. 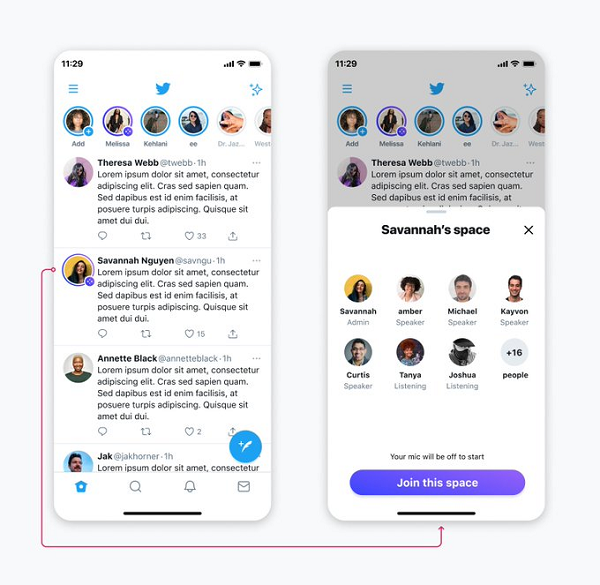 The changes relate to initial user responses to Spaces, which was expanded to more users over the last week. The feedback on Spaces thus far seems to be largely positive, with some even noting that Twitter's process is already more advanced than Clubhouse in various respects.

Which makes sense - Twitter Spaces is built on the infrastructure of Periscope, so the back-end architecture of the tool is already established. Twitter just needs to update the format and presentation in order to ensure it meets all user needs, and aligns with expectations. But soon, it seems likely that Twitter will be going for a full roll-out of the option - which could end up having major implications in the race to win audiences in the emerging audio social race.

Right now, Clubhouse is leading the charge, but that could change quickly if more high-profile users realize that they can reach much larger audiences with the same on Twitter. Clubhouse currently serves two million users and rising, an audience that it's built via its exclusive, invite-only approach. That approach, thus far, has been a key strength for the app, building a sense of FOMO among those who haven't yet been invited, but it could also end up being a limitation if Twitter scales up fast, and opens Spaces up to its full audience of 192 million daily actives.

And even if you can't create your own Twitter Space, you can listen in to any public Space, providing a significant upgrade in audience reach over Clubhouse already. Again, if Spaces is fairly close to Clubhouse, functionally, and big-name influencers see that they can use their established Twitter followings to amplify their conversations, as opposed to limiting their reach on Clubhouse, that could end up severely inhibiting Clubhouse's growth.

Really, Clubhouse should be looking to open up to as many people as it can, quickly, or else Twitter might just rain on their parade, to the point that it'll get drowned in the deluge.

That's somewhat similar to how Twitter-owned Periscope overtook Meerkat in the live-streaming race back in 2015. Meerkat raced to 2 million users, before Twitter launched Periscope, then used its network size to provide live-streaming functionality to far more users, before finally cutting off Meerkat's access to its social graph. Twitter could theoretically do similar to Clubhouse, which could end up being a death blow for the app.

And just like live-streaming, there's also the big blue baddie lurking in the wings, with Facebook also considering how it can incorporate similar audio meeting room functionality into its app.

But then again, Facebook might also not be so upset about Clubhouse gaining some early momentum. Facebook is under investigation, on various fronts, over anti-competitive practices, with allegations that it's effectively operating as a monopoly within the social space, crushing all competition before it can gain any real traction. But there are some more recent cases which suggest that this is not entirely correct. TikTok is rapidly closing in on a billion users, which shows that Facebook hasn't got a complete hold on the market, while Clubhouse, too, has been able to grow.

Given this, Facebook might well hold off on entering the audio social space, just for a bit, both to learn from the missteps of its competitors, and to show that newcomers like Clubhouse can compete, belying the case against it.

It does seem, however, that audio meeting rooms like this would be a perfect fit for Facebook groups, which currently see 1.8 billion monthly active users. That scale, within groups alone, gives Facebook significant scope to adapt the function for its own purposes, and eventually, end up winning the audio social space. So while Twitter might get some quick wins early, it still might be Facebook that wins out - even if it doesn't jump on the opportunity right away.

Neither outcome is particularly great for Clubhouse, of course, which is now facing various challenges on security, moderation, censorship, etc. It has gained popularity quickly, and it is working to improve its algorithms and systems in line with rising demand. But the challenge before it may be greater than it might initially seem.