But there are some notes of concern, particularly in regards to rising costs. First off, here's Twitter's current mDAU (monetizable daily active users) chart: 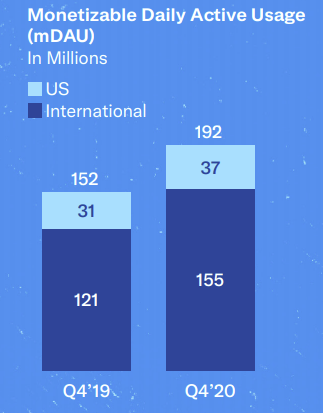 Twitter's a little slippery with the way that it presents its data, in only providing a direct comparison to Q4 2019, which makes the results look better. But for broader comparison, here are the previous four quarters of Twitter's mDAU stats.

As you can see, Twitter added 3 million more mDAU in 'International' markets in Q4, along with one million in the US. So it actually, seemingly, added four million users total in Q4, not five, but a mathematical anomaly in its Q3 results seems to have confused things.

Regardless, that growth rate is steady enough, but not exactly setting the world on fire, and that could be a concern when you also consider that Twitter may have just passed its peak interest point. Former US President Donald Trump used Twitter as his primary social network of choice, which should have brought more people to the platform more often. If it did, it didn't contribute significant numbers in the US market.

For comparison, Twitter's 27% YoY increase in active users is better than Snapchat, which posted a 22% YoY increase in DAU last week, while Pinterest saw a 37% increase in monthly active usage. Based on these figures, Twitter is not way out of line with industry trends, and 2020 was a difficult year to measure. Hard to tell, then, how much of a concern this element might be.

In terms of engagement, Twitter says that it implemented new elements to significantly improve content personalization and discovery within people's first few days of either activating or re-activating their Twitter account. Improving discovery has been a key focus as Twitter looks to attract more users - and long that line, Twitter also expanded its selection of topics users can follow, as opposed to profiles, while also seeking to better personalize topic recommendations.

"These improvements drove a meaningful increase in the number of Tweets liked by customers who followed a Topic, with average engagement rates for topical Tweets more than 2X the engagement rate for Tweets from account-based follows in Q4."

Interesting that Twitter refers to users as 'customers' here. If you ever wanted to know where you stand in Twitter management's eyes...

As you can see, Twitter's revenue growth between the US and International markets was pretty much split down the middle, with neither taking a significant lead in driving its results.

Twitter attributes the better result to increased interest in its ad products as the economy started to recover, with total ad engagements up 35% YoY. Data licensing and other revenue also reached $134 million, an increase of 9%, while Twitter's full-year 2020 revenue was $3.72 billion, an increase of 7% YoY.

The results, again, are steady, and show a growing maturity in Twitter's business approach. But there are also some concerning notes in Twitter's numbers.

Those are some significant increases in expenditure, which reduced the margin on Twitter's earnings performance. And more than that, Twitter's anticipating higher costs moving forward.

"We expect to grow headcount by more than 20% in 2021, especially in engineering, product, design, and research. Given the hiring and investment decisions made in 2020 and previous years, along with anticipated 2021 headcount growth, we expect total costs and expenses to grow 25% or more in 2021."

And that's before you factor in any potential impact from the coming iOS 14 changes, which Twitter is anticipating will be 'modest'.

"We expect total revenue to grow faster than expenses in 2021. How much faster will depend on our execution on our direct response roadmap and macroeconomic factors."

That's not exactly a heartening outlook for investors, but as we noted recently in regards to Twitter's recent acquisition spree, the platform is under pressure to innovate fast, and ensure that it not only avoids a lull in the wake of the Trump era, but that it actually thrives and builds on that momentum. Maybe, with the right positioning of these new features, including newsletter platform Revue and its new audio Spaces offering. Maybe, Twitter can slot them in just right, and maximize its revenue potential. But it's a big ask, and the numbers here don't do a lot to alleviate that pressure just yet.

But it is hard to make any real comparisons in 2020. It was a year like no other, which produced unpredictable results on many fronts, making it difficult to use as a forecasting tool for what's coming next.

Given this, we'll likely need to wait till at least Q2 before we have clearer direction on how Twitter's faring in the wake of Trump, and how its newer innovations and features are being received.