Almost five months after the initial launch of its Communities option, which enables users to share tweets with topic-aligned groups of users in the app, Twitter has today announced that Android users can also now engage in Communities, expanding access to these more dedicated discussion spaces. 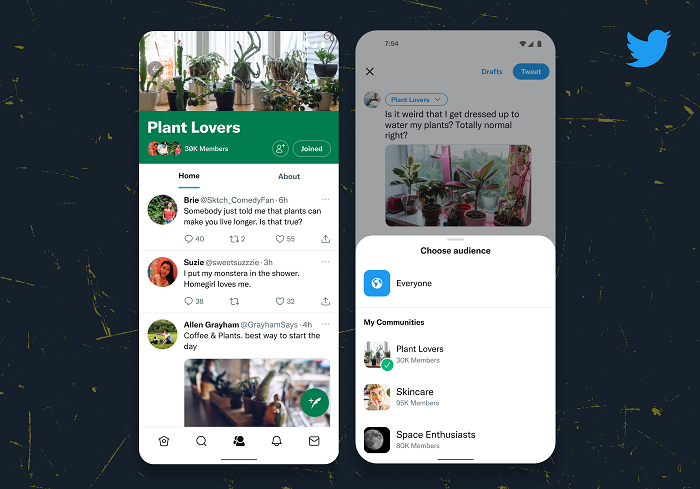 Communities is essentially Twitter’s answer to Facebook groups or Reddit subreddits, moving away from the traditional ‘public square’ approach of tweeting and providing another way to form community around specific subjects in the app.

Though how successful Communities have been thus far is questionable. Most Communities, based on anecdotal evidence, are not highly active, with a part of the problem being that they’re largely obsolete, and restrictive, which goes against the established incentive devices of the app.

On the first point, given that most regular Twitter users have already curated a list of people they want to hear from in their feeds, Communities doesn’t really serve any significant purpose in keeping up to date with your key topics of interest.

It could, of course, enable you to find new tweet discussions to join, which could expand your tweeting activity, but with Communities currently being either ‘invite-only’ or ‘open to all’, that means that you either need to know somebody already in an interest area to gain access (and community discovery is not overly intuitive), while ‘open to all’ groups are generally filled with spam – which even the invited groups are as well, to a degree, due to flaws in the joining process (each new member can invite five of their own connections).

Twitter is working to address this, with a new ‘request to join’ option, where community admins will be able to approve or deny requests. That could help to improve the situation, but right now, the existing process is problematic in some respects.

On the second note, prolific tweeters already have far more followers on their personal handles than they can reach within a Community, so tweeting exclusively to Communities, only to see less engagement on their comments, isn’t an overly appealing prospect.

Sure, you could share your opinion direct to a community, and get no likes or replies, but why do that when you could share the same with your own, established audience who are more likely to respond. And because Twitter has already engrained Likes and replies as social currency on the platform, the incentive to tweet drives more users to the biggest response surface, which reduces the motivation to share to Communities.

As noted, Twitter is working on some of these elements, including discoverability, which could improve the Communities experience.

we’ve now made it easier to share a Community on iOS!

Maybe. No doubt some Twitter Communities are already highly active, but right now, as it stands, it doesn’t look like Communities is set to become a major element of tweet engagement, unless Twitter can refine the offering, and re-ignite interest.

Maybe Android access will change this – and ultimately, Twitter has the engagement data, it knows how active people are in Communities, and whether it’s worth pursuing further in future.

Will it go the way of Fleets, or can Communities become a bigger part of the tweet experience?

We’ll know more later in the year, now that all users can access the option.