This could spark a significant shift in Twitter usage.

Today, Twitter has announced a live test of its new ‘Communities’ option, which will enable users to share tweets with selected groups of users in the app, as opposed to publicly broadcasting or sharing all of their tweets with all of their followers, all of the time.

imagine an alternate timeline where everyone just gets you

say hi to Communities—the place to connect with people who Tweet like you. testing now on iOS and web, Android soon! pic.twitter.com/TJdKwUa4D2

As shown in the launch video, Communities provides a dedicated, topic-based space to share and discuss relevant tweets, with users able to choose a specific community to tweet their message into from the tweet composer, which will then prompt more specific, focused interaction. 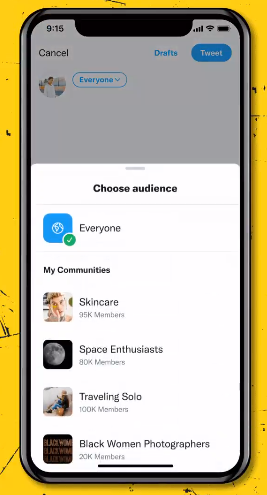 “Think of Communities as places created for conversation where the vibe and tone is set by people who share the same interests and want to have relevant conversations.”

And an important note:

“While you can Tweet only to your Community for a focused conversation, Community pages and timelines are publicly available so anyone can read, Quote Tweet, and report Community Tweets.”

So Twitter communities are not private, meaning that anyone will be able to read your community discussions if they choose. All active communities are searchable in the app, and will also be accessible via a new ‘Communities’ tab at the bottom of the app on iOS (note: this was going to be the Spaces tab, seems that’s no longer the case), or in the sidebar on Twitter.com.

Which could be a good move, but it also moves Twitter another step away from its fundamental ‘public square’ premise, which has been its driving force since its inception back in 2006.

At launch, the idea of Twitter was that it would be a space for everyone to come together and engage around the latest news and updates, and be a part of a global conversation. But now, with more private sharing options, Twitter’s evolving beyond that.

Is that a good move for the app? Time will tell, but it is a significant shift, and it will change tweet sharing, in many respects.

And it’s not the only update of this type that Twitter’s testing. The platform is also working on a new audience control option within the tweet composer, that would enable users to share their tweets with ‘Trusted Friends’ only, for example, while it’s also developing ‘Facets’, which would enable users to create different personas under a single profile.

Each of these tools changes both the audience reach and engagement potential of the app, which, as noted, marks a shift away from the global discussion approach, and takes Twitter into entirely different territory in many respects.

Which could be very helpful – for example, I really like basketball, but I’m hesitant to share too many NBA rumor-type tweets to my main tweet timeline for fear of annoying those who follow me for social media marketing-related discussion. The solution that many users have come up with is alternative accounts – tech journalist Ben Thompson, for example, has a secondary sports Twitter account where he primarily discusses his beloved Milwaukee Bucks.

Maybe, these new options could not only eliminate the need for secondary accounts, but it could also get people like me tweeting more often, because I’ll now have the option to share my thoughts on various topics with specific, interested audiences in the app, as opposed to feeling restricted, essentially, by the broader audience approach.

Which is the real focus for Twitter. The platform has set some ambitious targets for usage growth over the next three years, and in order to meet them, it’ll need new tools and sharing options. It’s already pushing the envelope in this regard, with additions like Fleets and audio Spaces to broaden its usage, while it’s also developing various creator monetization tools to help prompt more usage, and spark community growth.

Communities is the latest tool in this respect, and there is definitely potential there.

Will that change how you tweet? Will that be a change for the better?

In some ways, I can see it reducing the overall flow of tweets through people’s main timelines as a result - but if Twitter can then counteract that with increased engagement around specific topics…

In essence, Communities seems to be much more in line with broader social media usage trends, with users shifting their interactions into more private communities and messaging apps, and focusing on specific topics, as opposed to general posting. That likely bodes well for the option, and it does seem like it could gain traction among Twitter users, and make it a more engaging, more vibrant discussion space. Add focused Spaces within specific communities, for example, and you’ve immediately got much-improved Spaces discovery, while it’ll also help Twitter provide more targeted ad options, aligned with engaged topics, to help boost its revenue options.

The true impact will come down to adoption, and how many users actually start switching across. But it seems like a good experiment, with a lot of potential for the app.

Twitter Communities are initially being launched with selected users on iOS and web, with Android coming soon.