It’s been in testing for the last few months, and now, Twitter is launching its NFT profile display option, though only to Twitter Blue subscribers in iOS in the initial phase.

You asked (a lot), so we made it. Now rolling out in Labs: NFT Profile Pictures on iOS pic.twitter.com/HFyspS4cQW

As shown in the video, now, paying Twitter users will be able to show off their NFTs in a more certifiable capacity, with the images directly linked back to the ownership data on OpenSea. That could also limit unauthorized NFT use, as people who don’t own the image won’t get the new hexagonal logo or additional linking options.

“Twitter is where people go to talk about things they care about, and often where people have their first experience with crypto and NFTs. We’re now seeing people use NFTs as a form of identity and self-expression, and as a way to join the thriving community and increasingly active conversation on Twitter. This new feature provides a seamless, user-friendly way for people on Twitter to verify their NFT ownership by allowing them to directly connect their crypto wallets to Twitter and select an NFT from their collection as their new profile picture.”

Twitter Blue subscribers will see the new option in their profile picture settings, which will guide them through the linking process for their NFTs. 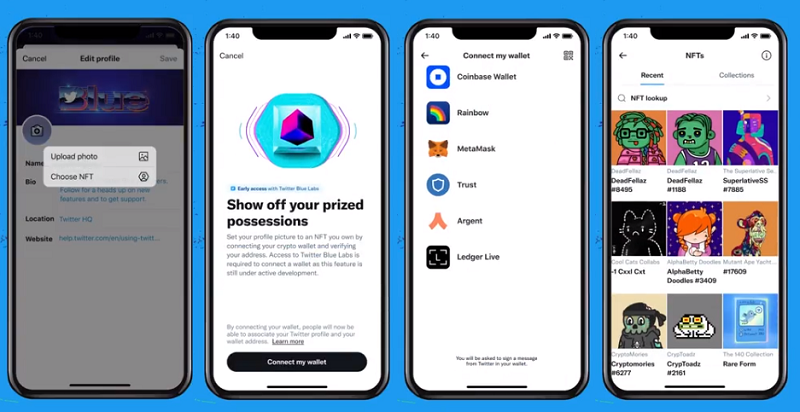 As you can see here, you connect your crypto wallet, which links to your NFT collection, establishing a direct pipeline between your image and ownership info.

That then switches your profile image to the new hexagonal shape (note: you’ll also have a hexagonal profile in Twitter Spaces chats), which, when tapped, provides profile visitors with more info on the displayed image. 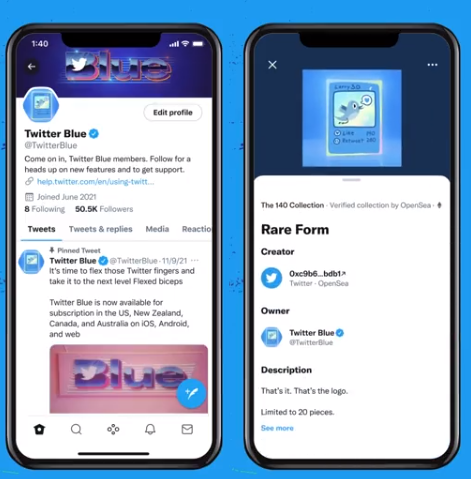 As noted, Twitter’s been working on the new display for some time, so it’s little surprise to see the feature go live, especially considering the popularity of NFT profile images in the app. Indeed, with total NFT sales reaching $24.9 billion in 2021, versus just $94.9 million in 2020, the market is exploding, and it’s become fairly common to see various colorful, digital characters taking over your Twitter feed, with even celebrities getting on board with Bored Apes, CryptoPunks, cats, aliens and more.

But it is interesting to see this added as a Twitter Blue exclusive. Twitter launched its $US2.99 per month subscription offering in the US back in November, in addition to Canada, New Zealand and Australia, which provides access to a range of add-on features like undo tweets, new color themes ad-free articles.

The initial Blue offering, it’s safe to say, hasn’t been a massive hit. But tapping into the popularity of NFTs could be a masterstroke for the option, because you can bet that the people spending thousands on JPG images also have enough expendable income to shell out another few bucks to display those graphics in this new format.

Of course, that does also limit the accountability aspect, because while not all users can access Twitter Blue, and not everyone will pay for the add-on features, there will remain many NFT profiles that won’t have the new hexagonal frame. The ideal would be that all NFT owners would use the hexagonal option, thereby making it easier to catch out those misusing content that they don’t own, but that won’t be possible just yet, reducing the impact in this respect.

Still, it’s a good way to boost interest in Twitter Blue, and it’ll be interesting to see whether Twitter continues to roll out new features like this as Blue exclusives, which could turn it into a significant supplemental income stream for the company.

It’s worth also noting that Twitter doesn’t actually need many users to sign-on to Twitter Blue to make it a hit. Based on its current user count, even if only 1% of Twitter users sign-up and pledge that monthly fee, that would still equate to more than $6 million per month (+$18m per quarter).

You can bet that more than 1% of Twitter users are keen on NFTs, and with Meta also looking to get into the NFT market, now is the right time for Twitter to make a move, and a bigger push in the NFT space.

Whether you like them or not, NFTs do look set to play a bigger role in the next stage of digital connection, with expanded NFT usage, beyond just profile images, potentially facilitating broader exchange of digital goods.

Though one issue with Twitter’s process could be its reliance on OpenSea, with a recent outage at the platform essentially knocking out Twitter’s NFT option as well.

That highlights an issue with what’s theoretically a decentralized market, where people are not - again, theoretically - reliant on any one platform.

It seems we still have a way to go on that front, but even so, this will likely prove to be a popular option, which will drive more users to sign up to Blue.

NOTE: Twitter has clarified that the new NFT profile display option will be coming to all users eventually, but it's starting in the 'Labs' element of Twitter Blue, where Twitter's giving subscribers access to experimental features.