Hey, are you excited about spending thousands of dollars on digital image files that may or may not end up being worth even more money at some stage in the future?

Whatever your personal feelings on the current NFT craze, it’s clear that they are a new trend, and that many people are now ‘investing’ in digital artworks via cryptocurrency, with a view to both showing off their connection to web culture, and striking it rich when these unique profile images, featuring apes, lions and cats, among others, become even more valuable in the theoretical metaverse. 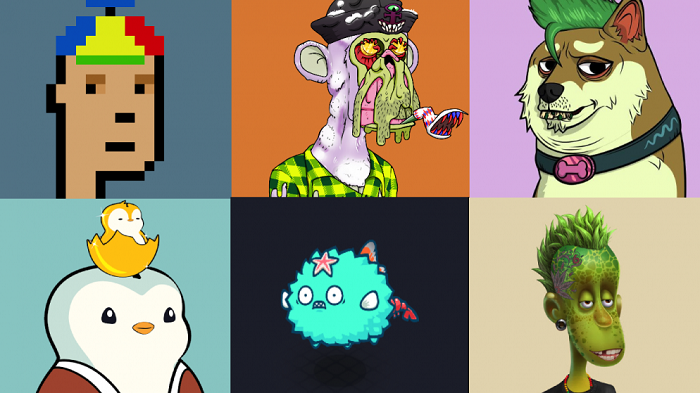 Long term, it seems unlikely to be a sustainable market, but nevertheless, NFTs are the craze of the moment, with various NFT-related events and meet-ups being held all around the world.

Some of the major social platforms are now also leaning in, with Instagram working on a new NFT display option, and Twitter developing an updated profile image display process that will enable users to showcase their NFTs by directly connecting their owned images back to their crypto wallet.

And that option looks to be getting close. Yesterday, app researcher Alessandro Paluzzi, shared this intro screen for Twitter’s NFT profile image option, which notes that NFT profiles will be displayed in a different shape to the regular round images. 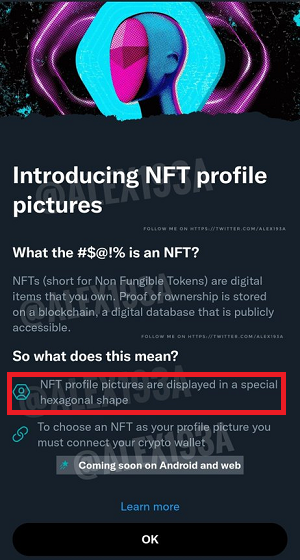 Today, the queen of social app hacking Jane Manchun Wong has uncovered even more detail on this, including what the new hexagonal images will actually look like, and how the full NFT connection process will work. 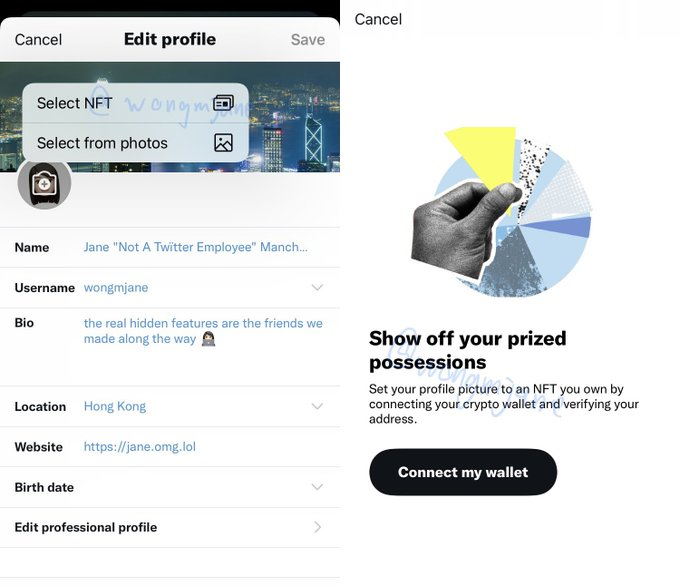 As you can see in these images, Twitter will soon provide a new option to ‘Select NFT’ when you go to update your profile image. As the intro screen here notes, users will then need to connect their crypto wallet to link their NFT collection direct into Twitter’s display tool. 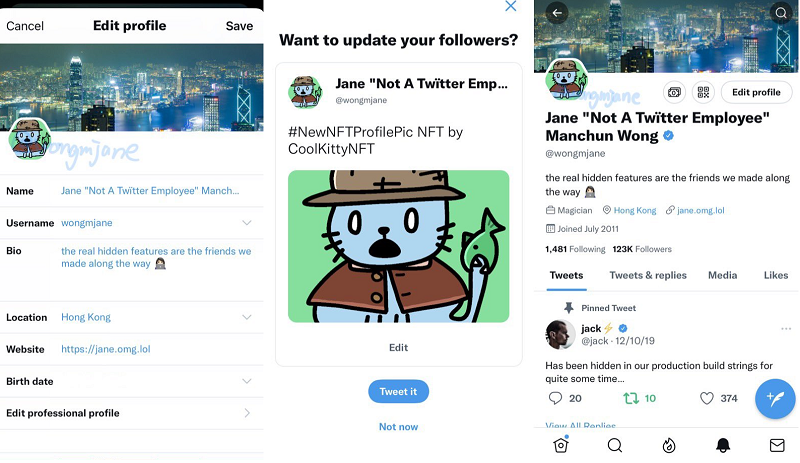 You can see in these images that the connected NFT profile image is hexagonal, which could make your NFT display stand out more in feeds. Twitter will also prompt users to alert their followers about their new profile image, with the NFT creator credited in the auto-generated message.

When an NFT profile image is tapped, users will also be able to view more info about the NFT, including the creator, the owner and more. 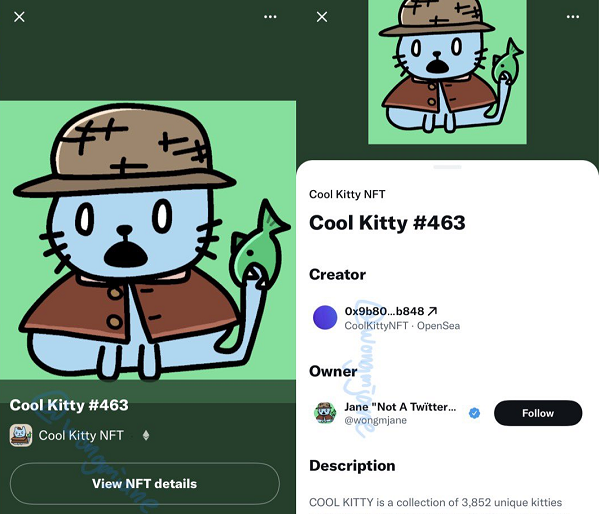 The idea is that this will provide more direct connection to the original artist, while confirming official ownership, with the alternate image shape also providing more assurance that the user does in fact own the NFT they’re displaying as their profile image.

Because anyone can right-click and save any image, right? That’s the key argument against NFTs, that they’re not really worth anything because anybody can download an image and use it as they like, even as their Twitter profile image. And unlike physical artworks, which entail an actual, physical copy, the difference between an original NFT and a copied file is nothing - so there’s not really any reason to pay for such. Right?

It’s correct in a basic content form, in that the original and any copy will essentially be the same, while buying an NFT doesn’t include ownership of the underlying work that the NFT represents, just that digital copy, which means that you don’t actually hold the rights to the original artwork. That gets murky in terms of how that work can then be re-used, but as the law stands, even if you own an NFT, that wouldn’t stop the creator from selling the original piece in a separate deal.

In terms of Twitter usage specifically, there is a question as to what happens when somebody uses your NFT as their profile image. Do you have any legal right to stop them? Can you ask Twitter to make them take it down?

Again, there are some legal complexities here, but this new display option looks to diffuse potential disputes by providing an alternate visual format for the NFTs that you do officially own. So if you see someone with a round NFT profile, that would likely indicate that they don’t actually own it - and maybe that would then be enough to dissuade people from ‘stealing’ people’s NFTs to use as their own profile image.

Which is a clever solution, and you know that the NFT community will love having a unique profile format for their owned images.

Of course, based on the above-noted ownership gaps, from a legal standpoint, that does point to further questions around the true value of NFTs, while the market is also being overrun with so many digital images and collections that it does seem, again, like it’s an unsustainable trend, at least from a value perspective.

Also, the metaverse, as it’s envisioned doesn’t exist yet, so anybody selling their NFTs with claims like ‘metaverse ready’ or similar are clearly stretching the truth, which does also put a cloud over the longer-term value of such works from this perspective.

At the same time, providing more opportunities for artists is great, in any form, and the fact that NFTs, if they can be displayed in a connected capacity like this, ensure that these artists are both getting paid and getting more exposure is a massive bonus, and as such, hopefully the broader NFT market can find equilibrium, and the ownership questions can be sorted, in order to keep it as an ongoing option for creators.

It’ll take some time to settle, and the current hype is masking the true potential to some degree. But in terms of broader applications, Twitter’s system does look like a good way to both share NFTs and address ownership queries, which could provide a pathway for other platforms to establish similar display options.