This could be interesting.

According to reverse engineering expert Jane Manchun Wong, Twitter is considering changing the name of its 'Lists' tab in the app to 'Channels', which could help to encourage further content discovery and exposure. 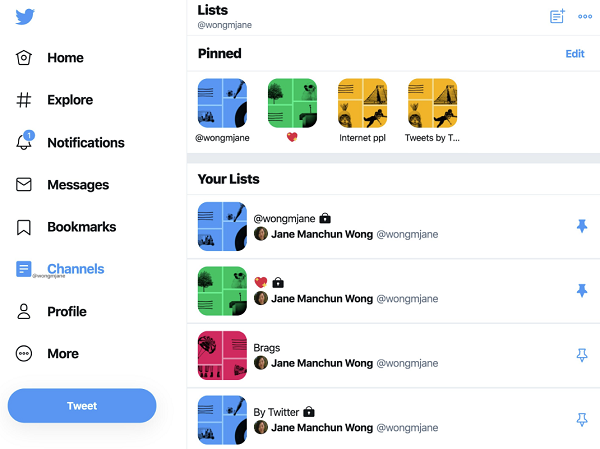 As you can see here, the 'Lists' tab in the left-hand side menu has been switched to 'Channels'. The functionality is the same, in that when you tap/click on it, you can see a collection of all the lists that you've created over time. But the re-naming would focus more on switching to an alternate timeline, based on topic, as opposed to how most people use their Twitter lists at present.

The change would actually make a lot of sense - Twitter's been working to make topics more of a focus, adding the capacity to follow specific topics, as opposed to profiles, and providing the option to pin swipeable list feeds in the app.

On our list? Make lists even better for you! ✅

Now on iOS, you can pin up to five lists, rearrange them, and swipe to access from home. pic.twitter.com/gNdfNE1DCl

The idea behind this is to increase tweet discovery - rather than being confined by your home feed, you can now more easily keep up with a range of topical discussions in the app, so you can stay up to date with what's happening across various areas of interest, while still maintaining your core news feed.

In this respect, 'Channels' is probably a better fit. The focus would then shift from creating various groupings of the people that you're following under different headers (e.g. 'Top follows', 'Friends', 'People I've met') to building 'channels'  around topics. Then you would be switching channels with a swipe across from your main tweet feed, adding emphasis to the alternate ways to use the option - as opposed to using lists as a simple segmentation tool.

This would also make it easier for newcomers to understand how they can use the option to broaden their tweet perspective.

The shift may be subtle, but it seems to align with Twitter's focus on how Lists can be used, expanding discovery of different content within the app, as opposed to micro-managing your existing connections.

There's no word from Twitter as yet as to how far along this might in development, or if it'll even see the light of day. But again, it makes sense - it seems likely that Twitter will look to roll this out sometime soon.