Twitter May Soon Enable Users to Save Their Spaces Chats, Shares First Look at Co-Hosting Option

With the race now on for audio social supremacy, Twitter is working to advance its audio Spaces tool quickly, adding new features and tools for users in the initial test pool, while it also looks to add more users into the expanding beta group.

And soon, Spaces may have even more utility, with Twitter product chief Kayvon Beykpour noting that they're looking to add an option which would enable users to record and re-use their Spaces after the fact.

Beykpour discussed the option in the latest Decoder podcast from The Verge, saying that:

Beykpour did also acknowledge that there is added complexity here, in regards to multiple participants, and getting consent for re-use from all speakers. But it does seem like this will be an option coming soon, which could give Spaces even more of a podcast feel, and could add new content options for those looking to make the most of their Spaces efforts.

That could provide it with another tool to hold over Clubhouse, which is also expanding fast, and is now in direct competition with Twitter as Spaces continues to gain ground. It's too early to call a possible winner, as such, in this new race, but Twitter's expanded reach, and established connection with influencers (and their audiences) could stand it in stronger stead, while new features like this could give it a functional leg-up on the competition.

It's worth noting, too, that Twitter does currently record Spaces conversations, which it retains for 30 days for moderation purposes.

On another front, Twitter's also developing a new co-hosting option for Spaces, which would provide another means to manage your live discussions. 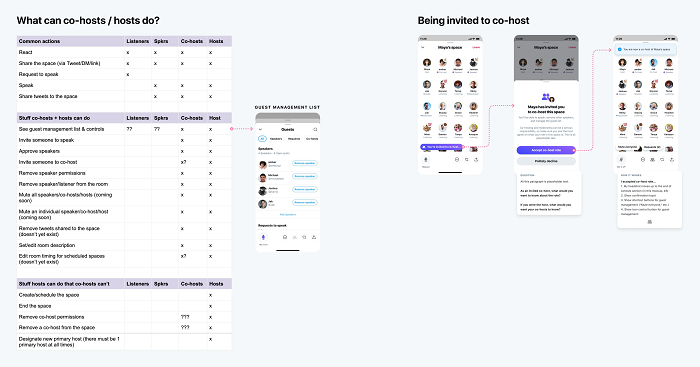 Twitter worked on various new Spaces elements at its recent hack day, which could see a range of new options coming soon, and co-hosts has been one of the most requested and discussed features around the option thus far.

With the capacity to co-host, and record your Spaces, that could open up a range of additional content possibilities, which, as noted, could add more value to the Spaces process, and make it a more appealing consideration for brands and marketers.

Some interesting features, with more to come. The audio social race, it seems, is just getting started.