With audio social being the hot trend of the moment, Twitter's working fast to ride that wave, with the development of its Clubhouse-like Spaces moving swiftly - probably faster than any Twitter product I've seen in the past.

Earlier this week, we reported on Twitter's new scheduling features for Spaces, and other refinements in progress. And today, reverse engineering expert Jane Manchun Wong has noted another new element that's currently in development, with Twitter also working on private audio Spaces within the app. 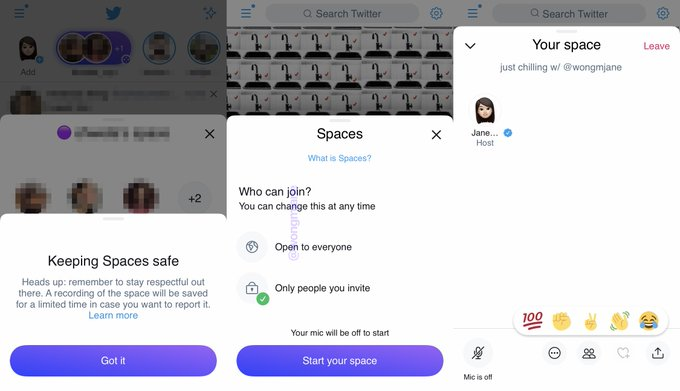 As you can see here, Wong has noted several Spaces updates that Twitter's working on, including temporary Space recordings for reporting purposes, updated emoji reactions within the Spaces UI, and private Spaces, which would only be joinable for those you invite.

For comparison, this is the current Spaces launch screen.

Note the variation in language between 'Who can join?' in the top example, and 'Who can speak?' in this version.

It seems like Twitter's looking to switch the wording to enable more private audio rooms. Of course, hosts can control who's able to speak already, but the new option would seemingly limit the audience of each room, if you so choose.

The audio recording element could spook some people, but the idea here is that the audio will be available for review purposes internally, not for public release. Some have noted that auto transcripts are also available, which somewhat negates the need for a recording, but the audio could provide important context in the case of any issues.

And these aren't the only new developments for Spaces - additionally, Twitter has also launched the first stage of Spaces for Android as well.

Android folks, our beta is growing! starting today you will be able to join and talk in any Space. SOON you’ll be able to create your own but we’re still working out some things. keep your ???? out for live Spaces above your home tl

Again, with Clubhouse gaining momentum (Clubhouse is also not available on Android just yet), Twitter's working to latch onto the trend, and maximize the potential of the format. Getting to Android first could end up being a key step, while expanding the option to more users could also help Twitter to boost the usage of its clone function, and lessen the impetus for users to download Clubhouse instead.

Then again, Clubhouse has already established a fanbase, and with audio being its sole focus, it could still win out through more refined, dedicated features. Twitter's key advantage here is scale, with broadcasters able to reach much larger audiences in the Twitter app. Matching up on that front will be difficult for Clubhouse to overcome, as eventually, most broadcasters will be looking to maximize their audience reach, in order to get all they can out of their audio efforts.

How Clubhouse counters that - or whether it takes a different approach - will be interesting to monitor.

As noted, Twitter's working faster on Spaces than it has on virtually any project in the past. Last week, Twitter's product chief Kayvon Beykpour acknowledged that Twitter's pace of development has traditionally been sluggish, even non-existent, but that's something that the company is now looking to rectify, in order to capitalize on its opportunities.

Twitter is also under more pressure to evolve, with activist investors pushing for progress at the app, or the ouster of CEO Jack Dorsey. That impetus has sparked a seemingly newfound ambition at the company, which has set some aggressive growth targets, and laid out a range of coming developments.

Audio Spaces could play a key role in this. It's still too early to say whether the audio social trend will end up being a fad, but it does seem like something that has a place in the app, and within social media connection more broadly.

Expect to see more Spaces announcements within the next few weeks.